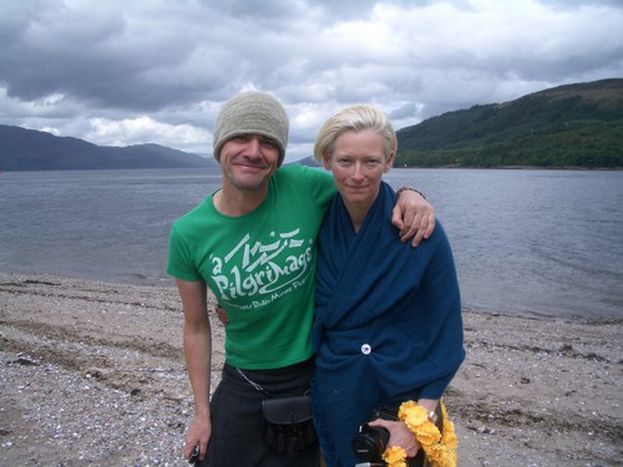 Tilda Swinton: ‘We would have organised this festival with or without my Oscar’

She has starred in the latest films from David Fincher, Jim Jarmusch and the Coen brothers... but her love of cinema has brought her back to Scotland, where she was born, to co-organise a portable cinema festival. Interview

One is an actress who was awarded an Oscar in 2008 for her role in Michael Clayton (2007). The other is a Northern Irish journalist, writer and former director of the Edinburgh film festival. Together, Tilda Swinton, and Mark Cousins thought up a unique homage to cinema: crossing Scotland from east to west, with a magical lorry that becomes a cinema at dusk. During the first week of August, the Pilgrimage film festival ('A Pilgrimage') stopped in tiny Scottish villages, on the shores of Loch Ness and in a school car park, in order to show the public some cinematic masterpieces. I meet the two cinephiles in the middle of a field.

I can’t help thinking that a big motivation behind this itinerant cinema festival is activism. Would you say that, or do you think that activism is too political a word? 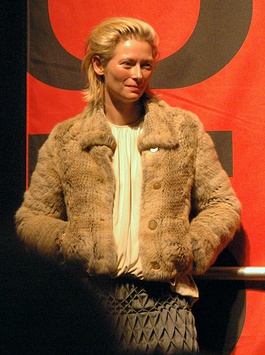 Tilda Swinton: No, that’s exactly what it is. Activism.

Mark Cousins: When we were younger, we protested against Margaret Thatcher, chanting ‘Maggie Out!’ in the streets. We were protesting against something. Now we are protesting for something – cinema.

TS: Here, we’re all activists. All of the pilgrims. Look at all the placards with (Japanese director Akira) Kurosawa or (American actress) Cyd Charrisse’s names on them, or quotes from (French director) Robert Bresson about cinema. There is dancing and music before each showing, and then there's our slogan ‘state of cinema’. It’s a hyperactive way of doing cinema.

MC: It completely transforms the way you see a film. I’ve seen The Night of the Hunter (1955) a dozen times. Even so, I had never seen or heard reactions from an audience before like the ones at Dores (one of the stages of the tour - ed). When Lilian Gish pointed her gun at Robert Mitchum, the audience clapped and cheered! 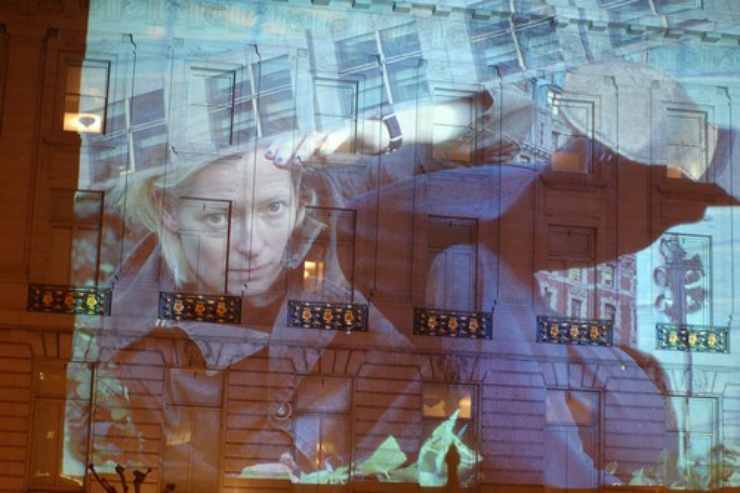 Every evening on the road with the convoy, there was a childlike excitement when everyone filed into the lorry. Were you aware of the innocence that the audience felt, a kind of return to more authentic feelings?

TS: During our first festival, in Nairn (a small Scottish town on the east coast, where she is originally from - ed) last year, the people who came, especially the older ones, said to us: ‘I haven't felt like this since I was a child’. The relationship that Mark and I wanted to create between the festival and the audience was one of trust. People don't come and see this film or that film because it's so-and-so's latest film, or because the casting is excellent or because it has good reviews. There is not an inch of marketing around the films. We don’t advertise the films at all. I think it's a way to make our relationship with cinema magical again, something we’ve lost because of the pressures life puts on us as individuals. As well as activism, there's community. 40 pilgrims followed you every day on your adventure.

TS: The idea of community is the starting point for everything Mark and I undertake. I'd even go as far as to say that there's something spiritual in it all. Cinema is a business, but it's a spiritual business! Don’t you think so? It's also got a ritual aspect: going to the cinema, sitting down, waiting for the film to start. We chose films that reflected that.

MC: All the sociological studies say more or less the same thing: people are getting more and more isolated. We've gradually lost the habit of sharing, both in terms of what we have and what we feel.

How did you come up with the programme, which ranges from Charles Laughton's The Night of the Hunter to Robert Bresson's Au hasard, Balthazar (1966)?

TS : That was definitely the easiest thing to do. It took us four minutes on the back of a postcard. Our heads are full of films. We left out a lot. If only I could have put them all on...

Tilda, did your 2008 Oscar make a difference? Did it make 'A Pilgrimage' easier to organise?

TS: Frankly, we would have organised the festival with or without my Oscar. But The national and international press have paid attention to what we have done here. I like the idea of someone flying to Chicago, reading The Times, and hearing about 'A Pilgrimage' and Nairn!

MC : Of course we always wanted to do something visible. But we told all the journalists who contacted us we wouldn't answer their questions unless they came here to see what was happening with their own eyes.

TS : They think that we only pull the cinema lorry for the photo opportunity... but once they've seen my red, sweaty face, after I've been pulling away at the ropes for nearly quarter of an hour, they realise that it's not just for show!

Finally, is there such a thing as a ‘state of cinema’, as the festival slogan goes?

TS : It exists, it is a tangible thing. Cinema is where we belong.

MC: For people who, for one reason or another, feel a bit different or a bit left out as children, like I did, the cinema becomes a home. It's where I was born.

TS: Cinema is a humanist act. When I think back to all the films we have seen over this incredible week, to the different cinematographic traditions we've looked at - be they Indian, Chinese or British - I think of the word ‘encounter’. Cinema is amazing in that it lets us project our life and our emotions onto the screen, and gives us back new ones. It has two parts: you leave yourself, you come back to yourself. Because of this we chose films that breathe, films with silences, that have the necessary space to project. Modern life is all about action, so pauses make a nice change! If this week has been completely exhausting, it hasn't been because of the organisation, but because we've seen three masterpieces every day. At other festivals, you see maybe four or five films a day, but there is definitely no more than one masterpiece in a week. 'A Pilgrimage' is a very rich diet.