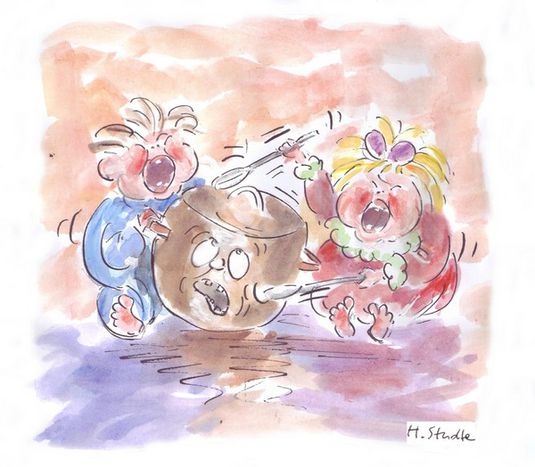 Throw your toys out of the pram

The Irish kick off after a 'scathing electoral defeat', whilst the Germans can be heard to 'wail like cats'. Weekly language expressions from around Europe

Losing an election is part of the political game. The day after can be difficult, much to the delight of certain commentators. The French, for example, talk about a  gueule de bois

(literally a 'wooden mouth', but meaning a hang-over), as if the politicians had drunk too much after the grand soir

) defeats, which illustrate the painful, cutting side of things.

After the European elections of June 2009, in Germany, after the defeat of certain parties, the press spoke of a miserable situation of cat wailings: Katzenjammer

. The social democrat party (SPD) was literally described as being in a foaming rage (schäumte

), while the Spanish talked about experiencing a crushing defeat (aplastante derrota

Results and commentaries are not always easy to digest, rendering politicians child-like. One national UK daily reader declared that Declan Ganley, the champion of the 'no to the Lisbon treaty' campaign and founder of the Libertas party, could be heard throwing his toys out of his pram

or a dolly out of his pram

in the distance. Spanish politicians also pull a face about it when they use the expression está haciendo pucheros

: pout, which is used when speaking about a sulking child. Strangely, the word pucherazo

('pout') evokes election rigging, favouring the change over in the Borbonne restoration (1874 – 1923). Would some have fallen in when they were little?