Thomas Thwaites, the Man Who Stares At Goats

Sometimes being a human can feel quite limiting. So one day, Thomas Thwaites decided to take some time off. He left being human behind him and became the animal which embodies the motto "carpe diem" like no other: the goat.

The British accent at the other end of the telephone is pleasant, calm and deliberate. Thomas is in no hurry. He has gathered profound knowledge which he wants to share with the world. Goats know many things which we humans are unfamiliar with. “I had considered other animals. I thought, for example, about an elephant and I did do some work to try to become an elephant. But research shows that they seem to have very complex and social lives, just like humans. They even they gather around to mourn a dead body. Then a friend told me I should become a goat because goats may actually escape the existential pain of being human.”

Thomas is full of praise when he talks about these four-legged creatures. “They are exceptional animals, especially when it comes to climbing. They can’t see their feet but still know exactly where to place them. They aren’t worried about what is going to happen next week, or next year. They reminded me that well being and meditation can bring you back into the moment.” 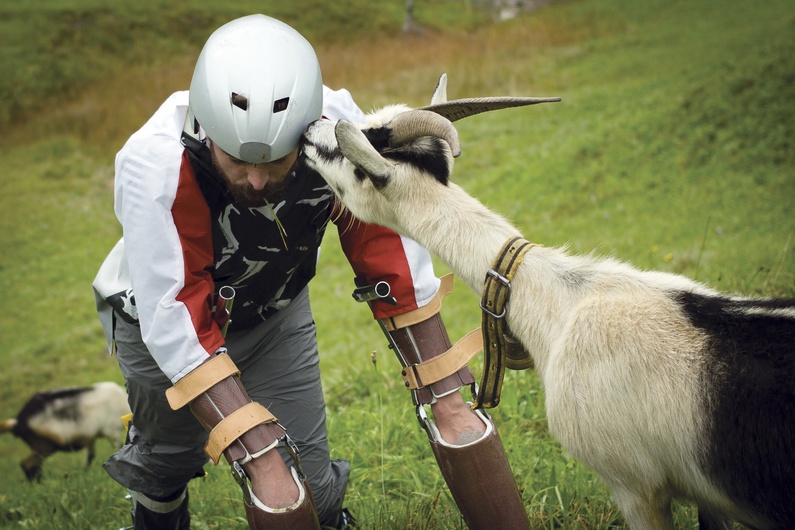 To transform into a goat and wander the Swiss Alps for three days isn’t just a crazy idea. It’s a biological and psychological experiment few are brave enough to try. “There is more to it than just crazy man trying to become a goat,” Thomas explains. While he considers himself just a normal guy, he’s anything but. “I’m similar to most people, with my ups and downs. So I was kind of curious about that.” One thing that’s certain is that, for Thwaites, science and design don’t have to be polar opposites. He’s already undertaken many a heroic deed with this outlook. In 2010 in London he created a toaster more or less  from scratch. Although he claims not to know what project’s coming next, it is hard to believe him.

Thomas’ projects grow out of a huge amount of ambition - above all, his own ambition, but also that of the community. “It was more like a project driven by this dream of escaping, of galloping away. I was curious to see if I could take on the perspective of an animal which doesn’t have the ability to regret or worry and can just be free.” If you ask Thomas what other people think about him and his ideas, he says, “The vast majority of people just see, let’s say, the surface story but, I have received emails from people saying they like the idea.” He has recorded his adventure as a goat in a book: GoatMan: How I Took a Holiday from Being Human (2015, Princeton Architectural Press, Nueva York). In it Thomas writes in detail, and with a healthy dose of humour, about the human dream of using modern technological aids to become an animal.

This “transhumanity” isn’t just part of a utopian future for Thomas. There are already many examples which come pretty close – his own work in particular. His fans are excited at the idea of remodeling human capacities with the help of technology so that not only our physical but also our intellectual abilities can be improved. “I went to see a neuroscientist and asked him to switch off the parts of my brain that made me different from a goat. And of course he said, ‘I can’t do that,’” Thomas tells me. After this, he went to see an expert on the behaviour of goats. Here he learned that other than the physical differences, the fundamental distinction between humans and goats is our episodic memory. It’s thanks to this that we save our personal experiences which are connected with a particular place and time. Without this capacity we wouldn’t have any memories, nor would we be able to call up these experiences over and over again. “Goats don’t have episodic memory. They can’t imagine stories or set up future scenarios. This is what makes it such brilliant tool for humans because it means we can think about things without having them. It is the basis of our inventiveness,” he explains. 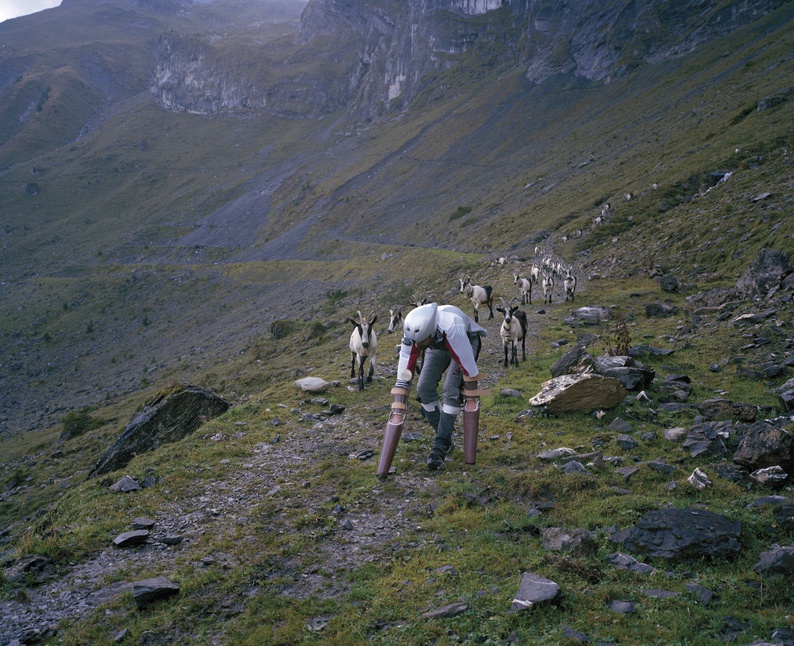 In science, much is still speculation and hypothesis, but it is precisely this which leads us onwards. “You can get some interesting insights by turning speculation into practice. I could have just speculated this about but I think by putting something into practice you realise how difficult it is, and how painful and this enables you to discuss it,” explains Thomas.

There was no way back now. Thomas became a mountain goat – or tried to at least – and lived with other goats for three days and three nights, thanks t a year’s worth of research and a set of prosthetic limbs. With these he was able to walk on all fours and view the world through the eyes of a goat.

So how does a day pass for a goat? ”You wake up and put on the goat prosthetics. I tried to sleep with them on, but it was too uncomfortable. On the first morning, after milking - I wasn’t milked,” he laughs, “we were going up the mountain, but it was terrifying because it was so steep and slippery and I was too slow. I couldn’t keep up with the goats”. As he tells me about the night, the smile returns to his voice: “At night, I slept with the animals inside the shed. That was kind of lovely, a bit smelly, but you get to it. A bit cold too and not massively comfortable. But you know what? It was nice being there between them just listening the sound of their bells.” 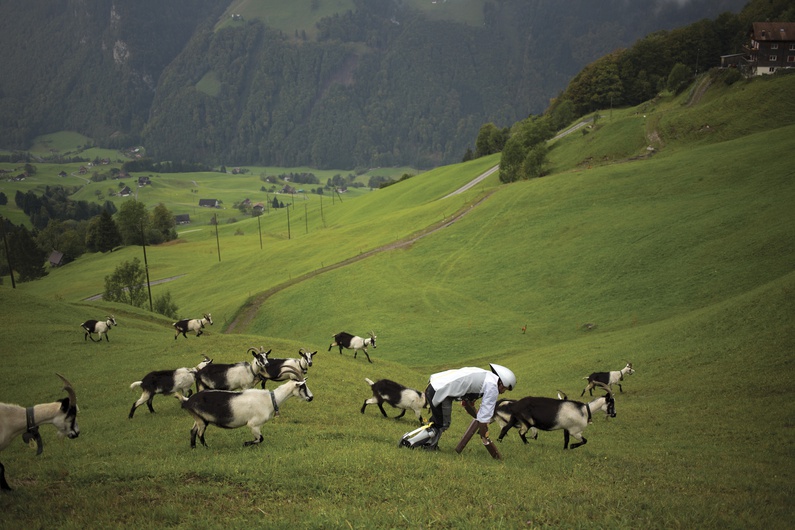 As in any good holiday, food is an important consideration. And up in the Alps, grass is a gourmet dish. “I made an artificial rumen in a silicon bag. I would eat some grass and spit it into one of those bags.” Science can bring us far, but the digestion of grass remains a mystery to the human stomach. Thomas continues, “We could not go further than this because at the University, where we were carrying out the research, in spite of being very interested they said they could not really help because it would be very dangerous for me. There is still a lot to discover about the world of bacteria.” 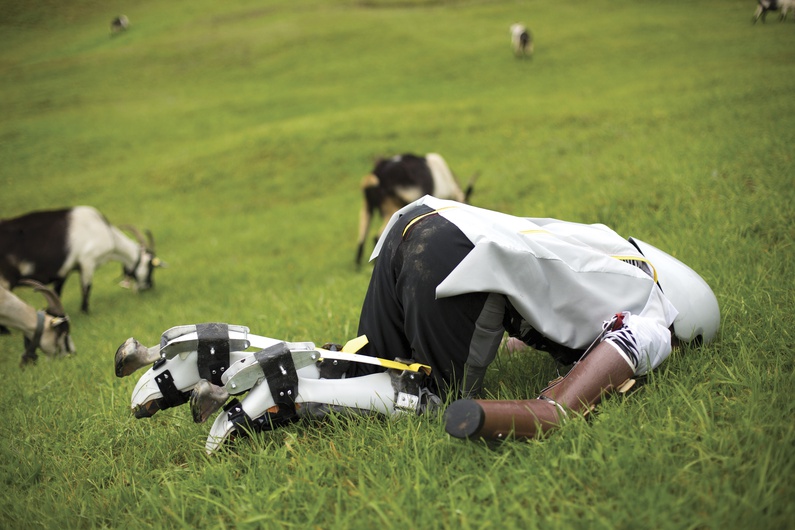 The goats immediately pricked their ears up at the newcomer. At first they were nervous but “they didn’t take long to start sniffing my beard and working out what kind of species I was. When I was leaving,  the goat farmer said that goats had accepted me and he even put a bell around my neck,” says Thomas of his life with the bleating creatures. Three days of holiday can be a very long time. An opportunity to meet new friends but also to get into trouble. “I even made a goat friend during my time there, with whom I hung out a lot. But I also almost got into a goat fight. That would be a sign of acceptance, wouldn't it? I just saw all those horns… and I ran away!”, he laughs. “When a new goat joins a herd, it has to find its place.” 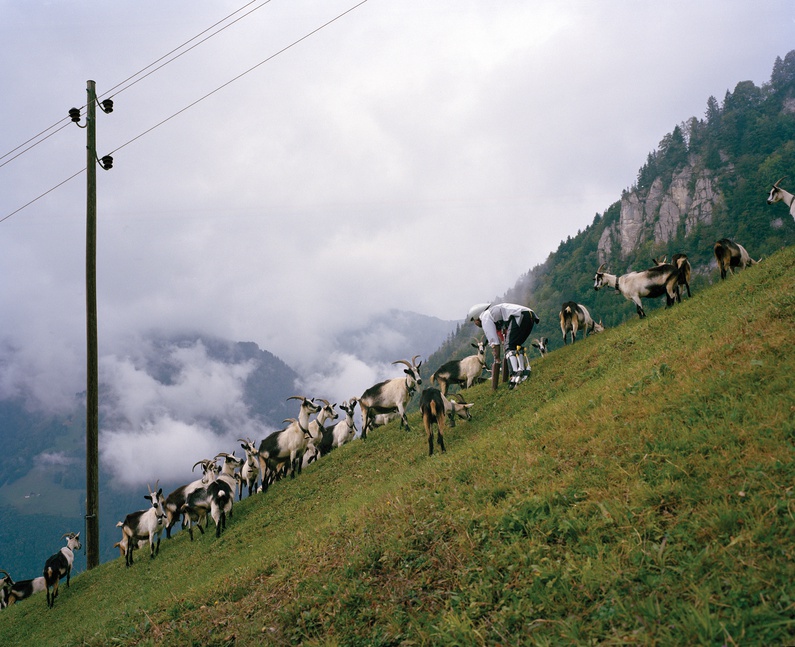 Back in London he looked at his coffee and his bed (the two things which he’d missed the most) with new eyes. While both objects were the same as before, Thomas himself had changed.

“I think I became much more conscious of the limitations of my own perspective. That’s related to some of the news about trying to understand different ideas, people having different perspectives. I guess the whole exercise was an experiment in trying to shift your own perspective. It slightly changed my own view of what reality is. And yes, I would love to move to the countryside and live there. We need society but you need to remember that you are also an animal. You realize that more in the countryside,” he emphasises. Can technology solve our problems? “I think our problems are something we can really solve ourselves. Is a common mistake to think that new technology will solve something which is essentially political and social. It should come from us,” says Thomas.

Thomas' thoughts don’t stop here. Anyone who spends three days grazing in the Alps has plenty of time to reflect. “Well, certainly, just not having hands anymore, suddenly the world is completely different, and I guess mentally I was trying to look at things and not try to categorise them. Seeing, for example, a chair and not directly categorise it as a chair for sitting, because goats wouldn’t see it like that. Changing my body was a very interesting way of getting closer to seeing the world from a whole new perspective,” he tells.

To finish with, a question about 2017 and dreams. “What would I wish for this New Year?” he considersfor some seconds and laughs. “I’d like maybe to find evidence of intelligent life on another planet. That would be very good,” he adds.

May science continue to progress along these paths – and incorrigible optimists along with it.