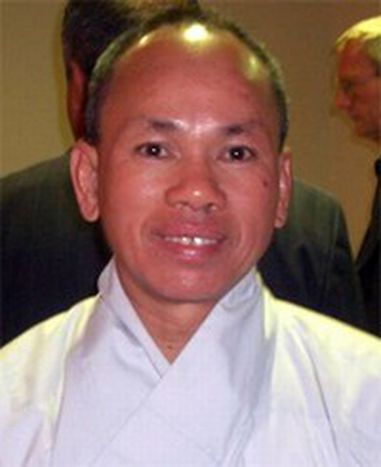 Former Buddhist monk Thich Tri Luc has lived through harassment, abduction and imprisonment at the hands of the Vietnamese authorities. Now living in Sweden, he tells of how he got there and highlights the human rights situation in Vietnam.

Vietnam, which for so long has been synonymous with the suffering caused by the American anti-communist attacks during the sixties and seventies, is now a popular tourist destination. And yet beyond the beautiful beaches and tranquil rice paddies lies a dark political reality. What is often forgotten, or glossed over, in tourist guides is the strict communist government that is still in place. Political expression is limited and human rights abuses are rife, and it is in this light that the European Parliament’s human rights committee held a hearing on the human rights situation in Cambodia, Laos and Vietnam this September. I met one of the speakers, the Vietnamese former Buddhist monk and political refugee, Thich Tri Luc after the debate.

There was something special about Thich Tri Luc, his grace, kindness and a sort of inner beauty that distinguishes him from other people. Amid all the chaos after the hearing, where journalists and interested MEPs had gathered outside the room, he greeted me. The story he had just told us inside, about his routine harassment, interrogation and arrest by the Vietnamese authorities for his role in the Unified Buddhist Church of Vietnam, was playing again and again in mind. I asked him how he felt about the hearing. For him it was “a good occasion to talk about all the human rights violations that are rarely mentioned; to help others in similar situations and hopefully to lead to the release of other prisoners.” He seemed to be so grateful to be here and be able to do something that we in Europe take for granted: to be able to speak freely.

As the Communist Party of Vietnam controls all state-sanctioned religious bodies, Thich Tri Luc explained that religious followers who distrust these bodies prefer to become part of independent movements - in spite of the state ban on them. One example of this is the Unified Buddhist Church of Vietnam (UBCV), which was the largest Buddhist organisation in the country prior to 1975. Asked about his first arrest back in 1992, accused of “circulating anti-socialist propaganda”, he told of how he was detained without trial for 10 months, harassed and interrogated by Security Police who tried to force him to become an “informer”. He was later “detained for 30 months in prison and 5 years under house arrest in Vietnam simply for helping to organise a UBCV humanitarian mission to relieve flood victims in the Mekong Delta in 1994". After he finished his prison sentence, the authorities continued to harass him and deprive him of his basic rights. Finally, he had no other choice but to escape to Cambodia to seek asylum in April 2002.

In Cambodia, Thich Tri Luc was granted refugee status by the United Nations High Commissioner for Refugees (UNHCR) in June 2002. But in July he was abducted by Cambodian and Vietnamese agents and forcibly returned to Vietnam. He recalled that day when “suddenly, some strangers accosted me, encircled me, abducted me by force and threw me into a vehicle waiting nearby. They handcuffed me, and then the man sitting next to me grabbed me by the throat and throttled me so hard that I was unable to cry out for help.” He asked them, “I am a political refugee. I have the right to live in Cambodia under UN protection. I have never broken Cambodian laws, so why have you kidnapped me and beaten me like this?”

He did not receive an answer and instead was held for more than a year without his family being informed about his whereabouts. When he finally faced trial in March 2004, the People’s Court in Ho Chi Minh City sentenced him to 20 months of imprisonment on charges of “distorting the government’s policies on national unity” and contacting “hostile groups to undermine the government’s internal security and foreign affairs.” Having already spent 20 months in pre-trial detention, he was released on March 26 and, since the refugee status granted to him in June 2002 was still valid, the Vietnamese authorities were obliged to issue him a passport and allow him to leave the country. Even so, “before I left Vietnam, they made me write a statement promising that after emigrating I would undertake no actions aimed at opposing the Socialist Republic of Vietnam".

However, this has not deterred him from his cause. "Now I am living in a free and democratic country, I will continue to support the UBCV, even though I am no longer a monk. I will continue to press the Hanoi government to respect religious freedom, human rights and democracy". Thich Tri Luc has now been in Sweden for one year and is doing his best to fit in and is currently learning Swedish. He feels he owes to Europe, and especially to Sweden, his freedom and he expressed “infinite gratitude to the people of Sweden and everyone that helped me, as well as the international community who worked for my relief”.

Amazed by Thich Tri Luc’s story, I could not help thinking that Europeans should do more to help people in his situation and, if Vietnam persists in suppressing basic rights, the EU should seriously review its policy vis-à-vis Vietnam. As he put it, “young people in Vietnam are growing up with no freedom of expression; everything is controlled by the Party. Young people in Europe could help by spreading knowledge of what is going on.” People like Thich Tri Luc make us realise how lucky we are to be living here and that we should not turn a blind eye to such violations of freedom of conscience, religion and belief. Something to bear in mind when deciding where to book your next flight to.