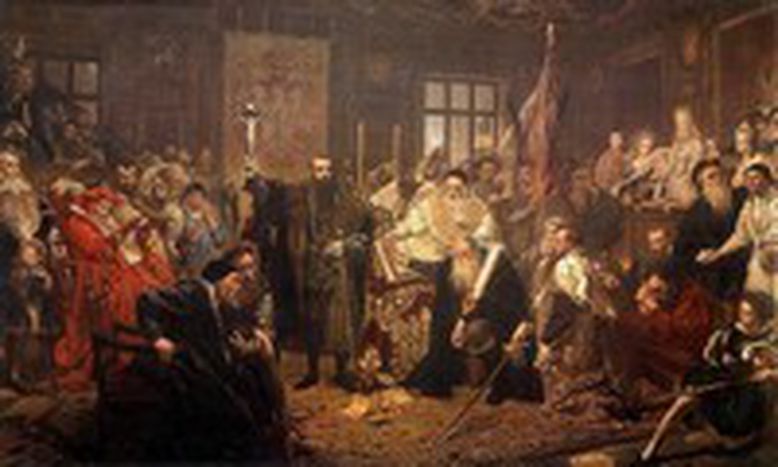 There was a union in Europe in the 16th century. It collapsed

On July 4, 1569, the Union of Lublin was created. It’s unlikely you have heard of it. Yet this predecessor of the European Union created the most progressive state in Europe

The EU faces a dead end. Wracked by the problems of the constitution and a supposed split between Old and New Europe, Europe has to fall back on its shared history. New Europe, too, is a part of this history, and some of its past is more relevant than we might think.

Once upon a time in the East

Once upon a time there was a union in Europe. In the Eastern part of our continent a country more politically advanced than any yet seen in Europe was created. The Republic of Two Nations (Poles and Lithuanians), created by the Union of Lublin in 1569, was a unique societal and political experiment.

In an age of continuous religious warfare, the Republic was an oasis of tolerance. Catholics, Protestants, Orthodox, Jews and Muslims lived together and their rights and duties were only partially dependent on their religion.

The Europe of the 16th and 17th centuries was full of states controlled by absolute monarchs. The Republic was different. Kings were elected by the Sejm (parliament), and followed its decisions in most areas of policy making. Some 10% of the population had electoral powers to choose their members of the Sejm, a democratic mandate unparalleled at the time.

The Republic was based on the principle of limited equality. To be a member of the ruling class (szlachta) meant being a citizen. And the szlachta were numerous. In certain regions up to 20% of inhabitants were members. Poor, rich, Catholic or Protestant, everyone could have been members of the class. They all had the same rights and duties towards the state; they were equal in courts regardless of their importance and wealth. A popular saying was: Szlachcic na zagrodzie równy wojewodzie(a poor nobleman is equal to a governor).

Being a member of szlachta was very attractive not only for the inhabitants of the Republic. The noblemen of the Saxony and Russia (the boyars) wanted their countries to join the Republic so they would have the same privileges as the Republic’s szlachta.

A lesson for our time

What eventually killed the Republic’s political experiment was ignorance. As long as the Republic stayed open and inclusive for others, as long as it was based on the principle of equality and tolerance, it was the most admired state in 16th and early 17th century Europe.

But as the Republic turned away from the principle of openness, problems started to arise. The Republic’s Parliament operated through consensus – if one member opposed a policy, then the entire session would be lost. Increasing internal fractures hamstrung attempts at political reform. Then, when the Cossacks (today’s Ukrainians) asked to be members of the szlachta, they were refused. This resulted in increased domestic tensions and civil wars.

What lessons for today’s Europe? First, do not ignore the experiences of the new member states. Second, it is a historical fact that a more advanced political project in Europe is possible. Third, this project requires visionaries and leadership. Fourth, this project needs to be open and inclusive. As long as the Union of Lublin was an open project, attractive for others (insiders and outsiders), it lasted and developed. When the Republic turned its back on this principle, it collapsed.