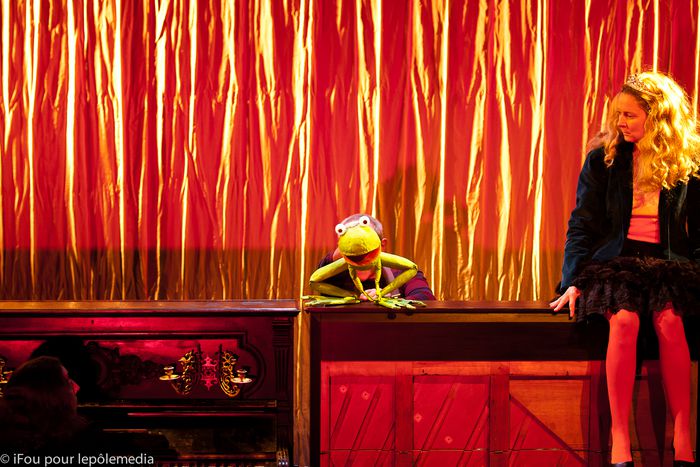 A variety of characters from every corner of the world have come to life in French theatre director Pierre Notte’s fairytales. Rendezvous: the Theatre La Bruyère in Paris

What to do with a rebellious princess who refuses to believe in the sanctuary of marriage and would rather play Mozart absent-mindedly? 'I’m blonde, rich and that’s all I care about!‘ exclaims Goldilocks right at the beginning of the play. But whilst the queen continues to agonise about her wayward daughter, the latter has already chosen her betrothed from a circle of frogs, and become a glittering green frog, comfortable amidst watercress and cowslips. What could end up being a sweet ode in the acceptance of alternative lifestyles fast becomes a horror story. In a fit of gourmet rage, the evil queen promptly swallows her daughter and son-in-law, who only break free after a long battle with the royal intestines after an elegant vomit behind the piano. 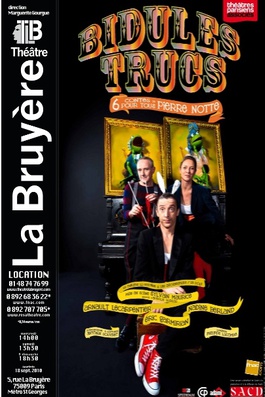 Pierre Notte’s six short stories or ‘Whatchamacallit Things’ (Bidules Trucs) are wild fables in which the paths of the tiny monster and the poor predator cross, or where the malicious grandmother and the fantastic bogey meet. Colourful puppets, great pianists and unique songs, also penned by Pierre Notte, complete the recipe. The morals of the tales are often so subtle that the children in the audience probably don’t get it. Moreover, the play is subtitled ‘six tales for everyone’ (Six contes pour tous). At the premiere in Paris on 4 September, a decidedly large part of the audience looked like they had long since celebrated their seventh birthdays. The playwright, who came up with the concept of Bidules trucs when he worked with children in hospitals and kindergartens, emphasises that they are for adults too: ‘They should help us relive our childhood and to age us a little slower.’

The material for Notte’s fantastic bestiary – which is like a medieval collection of animal tales with its speaking rabbits and singing frogs - is drawn from a broad range of European fairytales, which are restricted neither by borders nor by languages. The majority of the actors, be they white lions, mean cats, hungry wolves or meddlesome kings, seem to have popped straight out a Grimm brothers fairytale, though they’re opened for a more modern interpretation.For example, that’s how Antoine de Saint-Exupéry‘s Little Prince ends up saving the life of a lion statue that is alive, or how Puss in Boots becomes the hungry caterpillar, who shares his fun with a sad policeman, or how the big bad wolf (who once tried to devour Little Red Riding Hood) becomes the victim of a childish violent fantasy. The Americanised frog king is akin to Kermit the frog from the Muppets in his role as a pop singer with an ailing voice. Pierre Notte’s Panpan Rabbit, who could have come out of Disney’s Bambi or Lewis Carroll’s Alice in Wonderland, become’s Louis XVI’s lumbering servant. Marie Antoinette merely smiles at her subjects before turning her attention back to her knitting. The silent intermezzo in the fourth part, which features two pedestrians philosophising about the meaning of life and the force of gravity, thrusts an absurd Samuel Beckett-style dialogue on the viewer. 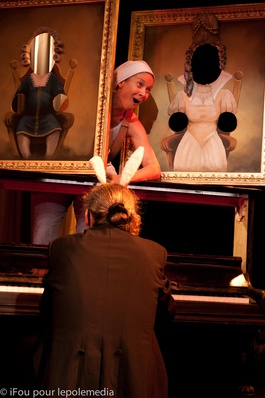 But what appears to be a jovial, light-hearted and colourful play dares to finish with an ending featuring a reworking of the century-old fear of the angry grey wolf, which plagued little Peter in Sergei Profokiev’s musical fairytale. Bidules trucs ends with an unafraid child quickly devouring the wolf, who had prematurely been rejoicing about his bloody dinner. Why be afraid of a character in a fairytale? The dark sides of our childhood, the kingdom of fears and nightmares, as well as a longing for happiness and the joy of being silly find their way into the Bidules trucs, making this more than just a children’s theatre.

Director Sylvain Maurice calls the six pieces ‘a kind of cabaret in which the joy of acting and the tragedy of childhood, which we haven’t quite gotten over yet, go hand in hand.’ But the piece doesn’t exclude a bit of fun. When the audience leave the theatre with the lyrics of Pierre Notte’s song ‘I Laugh‘ (Je Souris) on their lips, the frog and the cat can lean back relieved, as they have fulfilled their fairy duties to utter satisfaction.