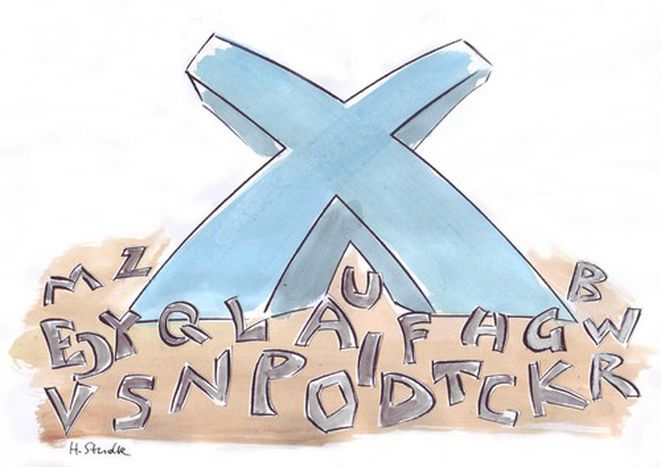 A letter for all seasons

Once upon a time, Mr. X and Mrs. X went on a holiday to Amsterdam, the town whose crest bears three Xs. They took their XXL suitcase. They wanted to have an X-tra special time, so toured the city in stead of going to the cinema, although X-Men and X-Terminator were on.

Whether to signify something secretive or unknown, or rather something interchangeable, 'X' can always be used as a variable or shortener. It came to be used in writing in three different forms: as a letter, a symbol and as a digit.

'X' is also widely used as a symbol, signifying for example the 'Christ' in x-mas, but also all sorts of crosses and crossings, be they of paths, in genetics or horse-breeding.

The Roman digit X for '10' was put together out of two Vs (or Us, depending on the handwriting), the Roman '5', whereby one stood on its head. It was enough to have messy handwriting, however, and you'd be guilty of ein X für ein U vormachen, a German saying literally meaning 'using an X instead of a U', and figuratively, having somebody on.

In any case, in speech the 'X' always takes a vowel, which in English allows for a spice up of words like 'extreme' which becomes x-treme and can even lift the gloom off things like X-boyfriends.