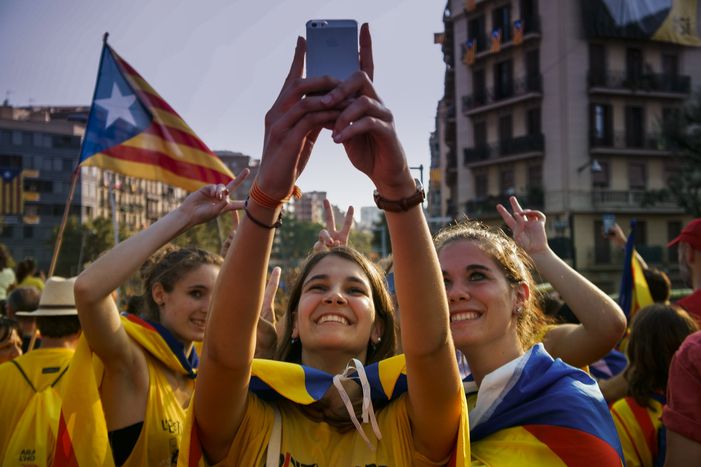 The view from the media: Separatists win in Catalonia

The separatist coalition Junts pel Sí and the far-left party CUP won an absolute majority of the parliamentary seats in the regional elections in Catalonia on Sunday. Spain's central government must take the election outcome seriously, some commentators urge, saying that it will give separatist movements in other European countries fresh impetus.

Separatists' victory has impact on all Europe - La Repubblica, Italy

The outcome of the regional election in Catalonia will have serious consequences for the EU, the centre-left daily La Repubblica predicts: "Because if the separatist camp breaks Madrid's resistance within 18 months, as it has said it will do, this would mean not just Catalonia's separation from Spain but also its exit from the EU and the Eurozone. … Whatever course the controversy and Barcelona's attempt to emancipate from Madrid take, we can be sure that it won't be easy to mediate and that the sentiments of Spaniards of all different political orientations will be aroused. Hopefully this won't culminate in violence. But above all the campaign will be followed closely by other separatist movements from Scotland to Flanders, not to mention the Northern Italians of the Po basin. Because they are aware that their own struggles for independence depend on the success of the Catalan movement." (28/09/2015)  (28.09.2015)

Although the separatist party alliance Junts pel Sí and the left-wing separatist CUP attained the absolute majority of seats, they only received 48 percent of the vote. But even if they failed to achieve their goal of securing an unequivocal vote for Catalan independence Madrid must now make overtures to the separatists, the centre-left daily El País urges: "An alternative [to a separatist coalition government] seems difficult to impossible. For that reason, and also because other lists are calling for a reform of the relations between the central and regional governments, no one must ignore these election results - including the central government in Madrid. It must react quickly, open the door to dialogue, and try to find an answer to the Catalans' clear call for change. The government must finally make clear proposals instead of hiding behind the courts."(28.09.2015)

Spain is not a prison of the nations - Neue Zürcher Zeitung, Switzerland

If the government in Madrid really wants Spain to remain united it must think about what concessions it can make to the Catalans, the liberal-conservative daily Neue Zürcher Zeitung comments: "So far there has been no dialogue between Madrid and Barcelona; the political protagonists have gone out of their way to prevent it. Ahead of the vote both Spanish leader Mariano Rajoy and Mas came across as inordinately stubborn. They claimed to be defending noble principles, Spain's unity on the one hand and the people's right to self-determination on the other, but what they really wanted was to win votes. The Spanish elections are yet to come. It remains to be seen whether new governments in Madrid and Barcelona will make a start on real negotiations. … The Spanish constitution does not see Spain as a 'prison of the nations'. Nor does it forbid debate on fundamental questions of the Spanish state, and if necessary it can be changed." (28.09.2015)

After this election it seems very unrealistic that Catalonia will become independent within 18 months, the liberal daily Público writes and calls on both sides to return to the negotiating table: "What is seen in Madrid as a 'secessionist adventure' can now be confirmed with figures: almost half of the Catalans believe they will be better off with their own institutions. … Spain must deal seriously with the Catalan issue because a division scenario is not a sensible move. Therefore they should look at the reality as it is  - without illusions. The solution must be political and it can only be found through negotiations. … The Catalan head of government Arturo Mas has announced that he would negotiate a secession with Madrid within 18 months if his party won the election. That is simply no longer realistic. But we all know - Mas too - that negotiations are always an option if the will to negotiate exists." (28.09.2015)