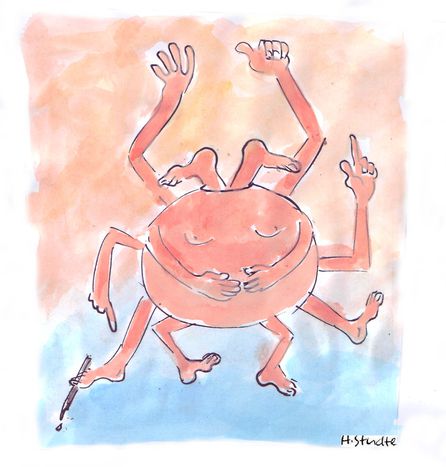 The Sardinian link to 'feet' expressions in Europe

Essential but mistreated – that is the foot’s sad fate, more often than not used as a vehicle for negativity. It’s a destiny which unites all feet throughout Europe, even chiropodists from the Old Continent, who cannot make head nor tail of it all, and who start every day 'on the wrong foot'

I remember when, as a young child in Sardinia, I accompanied my mother to the chiropodist. The latter was a very serious-looking woman, with an air of resignation about her. It was many years later that I understood why: it was the feet. The body’s last outpost, feet have always been maligned in Italy. Any phrase containing the word 'feet' has, in fact, negative connotations. Almost always. The chiropodist suffered because of this.

I began to suspect this fact when, after having completed some school homework, my teacher Lidia remarked quite rudely 'il tuo tema è fatto con i piedi -'you wrote your essay with your feet, another way of saying 'your essay is rubbish'. As an aspiring writer, it was traumatic for me to say the least. But it was even clearer the day when my intoxicated football team coach shouted from the bench after I’d missed a goal, hai due piedi sinistri! In English this translates to 'you’ve got two left feet!', which is more a reference to not being able to dance. And I was offside. My aspirations as a footballer were snuffed out then. I 'left by foot' (levai dai piedi) or quit the following day. But my father wouldn’t accept that, and told me not to let anyone step over my head (i piedi in testa), or treat me with disrespect.

Going back to chiropodists, they don’t fare so well in the rest of Europe either. In France or England, it can get political: voter avec les pieds (vote with your feet), means leaving, or emigrating because of a suppressive political regime’. Don’t be flattered if in Spain they call you a gigante con los pies de barro (a giant with feet of clay); it means you grew up or got fat very quickly, but the rest of you is not so stable. In England you can accuse someone who is invading your space of getting under your feet. In Germany you can lash out at someone's argument or plans by describing them as being weder Hand noch Fuß - not making any sense by being neither hand nor foot. The Polish and Brits share a more subtle expression, showing more respect for chiropody. They say Moja stopa tam nie postanie (I wouldn’t set foot in there).

But after all, I’m from Sardinia, which was named Ichnusa by the ancient Greeks. The word comes from ichnos, meaning 'footprint' because of its distinctive shape. And I love feet. Maybe that’s why I like to play footsie (seducing someone with your foot). And I will continue to do it until I have one foot in the grave or even when I’ll end up six feet under.

Translated from Non farti mettere i piedi in testa!