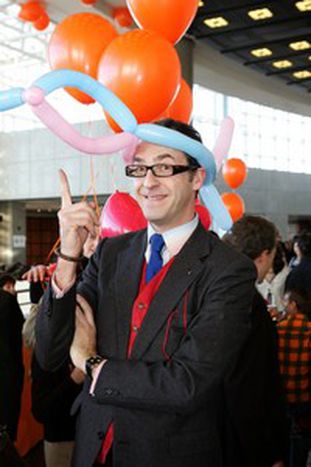 The real jet set is the people you never see!

But where the hell do you meet such people? Emmanuel de Brantes, a true jet-setter who knows all the nooks and the crannies of the rich and famous like the back of his hand, gives us some clues

Socialite columnist, nephew of the former French President Valéry Giscard d’Estaing, Emmanuel de Brantes, 42, was the person upon whom the protagonist of Fabien Onteniente’s 1992 film Jet Set was based. He recently published a satirical book about the beautiful people, entitled “The Spectacle of Society.”

Who are the jet set?

They are migratory birds. They go wherever the parties are. Fashion shows (ready to wear and haute couture) and art fairs, like in Basle or Miami, take up big chunks of their diary.

You never see the real jet set. They try not to be famous but to rub shoulders with celebrities. There is a difference.

What are going to be the hot spots of summer 2006?

The season always begins with the trendy Cannes Film Festival. The whole jet set heads to Cannes, and even the main nightclubs in Paris have a special Cannes room. Like last year, the Baron will be the main alternative to giants like the Man Ray or the VIP Room. At the same time, the best parties often take place in villas. For example, the parties held by Johnny Pigozzi, the Italian inheritor of the automobile company Simeca and one of the world’s biggest collectors of contemporary African art, take place in his sumptuous property in St Jean Cap-Ferrat.

The Eden Roc Hotel, where you pay for your room in cash, is also close to the top of the list. All of Hollywood goes there every year to meet up. They spend each morning jogging by the sea, and then they meet up around the pool for breakfast. Finally, they meet in the evening - for some wild after-dinner parties.

After Cannes, it is off to Bali, where the coast is very strong this summer, despite the terrorist attacks. We know this because it is expensive to rent houses again, which is always a good indicator. On Bali, it is a good idea is to rent a bamboo villa for 30 years, which is the longest period possible by law, as it can be very profitable! Corsica is still a main destination, particularly the Gulf of Sperone, as well as Sicily and Sardinia. Of course, Marrakech, the Deauville of 21st-century Europe, is up there too. You can find everyone there: footballers, movie stars, not to mention politicians and royalty. Tangiers is also climbing the list thanks to its pleasant climate and coastal location.

What about the rest of the year?

The Hamptons, on Long Island in the USA, are still a safe bet. It has become very cool to spend New Year’s Eve in Cuixmala (Careyes) in Mexico. The singer Seal has a house there, along with the director Quentin Tarantino, who filmed part of Kill Bill there. Marrakech is also popular during the November Film Festival…. as well as during the rest of the year!

Who throws the best parties?

Without any shadow of doubt, we have the Wongs, Andy and Patty, who organise a fantastic party every Chinese New Year in their London apartment. There are also families like the three daughters of the American billionaire Miller: Marie-Chantal (who married Crown Prince Paul of Greece), Pia Christina and Alexandra Natacha. They still lead a very jet-set lifestyle, even it if seems calmer and smoother nowadays. We cannot forget the Picassos (Alimine and Bernard, Olivier and his sister Diana), Julio Santo Domingo, the Italian Giampiero Dotti and Richard Branson...