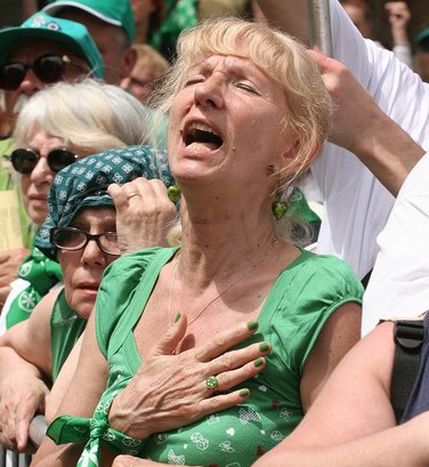 After Geert Wilders in Holland, the1 Le Pen family in France gained the votes at the regional elections  on 14 March 2010, confirming the positive trend of extreme righ-wing at the old continent. Together with Italy's Lega Nord, these parties represent a practical example of new right populists who do not like to be labelled 'extremists'

'Sometimes they come back' seemed to be a slogan attached to the Le Pen father and daughter duo after the good result they achieved on 14 March 2010 during the first round of regional elections in France. Their party Front National (FN) won a respectable 11.42% at a national level (9.26% during the second round, when they were presented in twelve regions). Although it seems hasty to talk about rebirth (at the 2004 regional elections the party won 14.7% at a national level), it is true that FN launched a very strong message to its opponents: 'They declared us dead too soon.'

Not too much of a surprise

However, a bigger surprise came from French pollsters who were predicting lower results for the Le Pen party. On the other hand, if we take a look at the last European elections, right populist parties had good results almost everywhere. Consider some of the local or regional elections in the other European countries, which shows off the same trends. Two other examples are the PVV (Party of Freedom) in the Netherlands and the Lega Nord in Italy. The PVV, run by the blond anti-immigration leader Geert Wilders, was a genuine winner of the last municipal elections in the Netherlands, held on 3 March 2010 (16.97%), whilst at the parliamentary elections in June they were close to becoming the second party in the country. Lega Nord in Italy has been on a rise for years, and today they can even claim four ministers in Italian prime minister Silvio Berlusconi’s government. According to the pollsters, at the regional election on 28 March, the party leader Umberto Bossi might have gained the lead in two Italian regions in Veneto and Piedmont.

Nowadays the FN, Lega Nord and PVV represent three different expressions of foreign radical right-wing. They are three faces of diversified universe in continuous expansion. The anti-globalisation and rather europhobic FN is the expression of a classical social right-wing, strong nationalists. Lega Nord represents the rural right-wing, which is more regional and attached to the local culture. It is overwhelmed by pagan myths and at the same time a paladin of christian roots. The Dutch PVV represents right-wing populists and nationalists. 'They are liberals at the economical level and progressivist at a social level. For example, they do not condemn homosexuality,' explains politicologist Jérôme Jamin.

There are remarkable differences between their political campaigns in question but all of the parties are anti-islamism. Geert Wilders is one of the main exponents of European crusades against islam, and even went on trial for instigation of racial hatred. On 6 March Wilders told the French daily Le Figaro: 'I do not want new immigrants. I have nothing against the people, but we have problems with islamic ideology. That is the ideology I regard as fascistic.' Lega Nord on the other hand seems to be obsessed by an eventual 'risk of the islamisation of Europe': 'We are anti-islamic! We cannot be colonised by islamists,' were the words of Alessandro Savoi of the Lega Nord in Trentino. France's FN recognises the threat to cultural balance in France, regarding the issue in quantitative limits. 'What seems to be the largest threat from islam are not its values, but the number of muslims. If there were only 2% or 4% of muslims in France, it would not have been any problem. Bus as soon as the number increased over 10% the problem of cultural balance occurred,' stated Alain Soral, an ex-communist who moved from the FN in 2007.

Above all, it is the type of populism these parties embody that makes them all look similar. In fact, the FN, PVV and Lega Nord are amongst the major advocates of a type of populism that substitute classical right /left-wing dichotomy by a slightly modern system/anti-system, in which the 'system', partially consisting of political, financial and syndical elites, get represented together by the corrupted and the exploiter. Right-wing populists should start their battle against these elite, and recognise them as a true alternative of the 'anti-system'. Piero Ignazi, another politicologist, points out that 'each of these parties manifest a strong trial against some aspects of modernity, especially regarding multiculturalism, managing to attract transversal consent, especially amongst certain groups because they give answers to issues of 'values' and 'identity''. Those 'answers' are usually characterised by xenophobic and racist features.

Identity, ideology of safety, islamic threats, immigration and euroscepticism are some of the ‘battle horses’ of western right-wing populists. Right-wing parties are always getting stronger on those territories where talking to people means using fears and weaknesses. They take advantage of the gaps left by the left-wing, who seem to forget their original peoples’ vocations. Europe is looking at these right-wing populists worriedly; the liberal right-wing (when not allied) is regarded as the left-wing, which is condemned and judged as folkloristic. Nobody seems to be interested in the analysis and comprehension of the motives of this success, or to understand what the reasons are for these resistances that occur during the process of European construction. It would probably be useful to start with asking what the cultural seeds that give the hardest to these movements are.