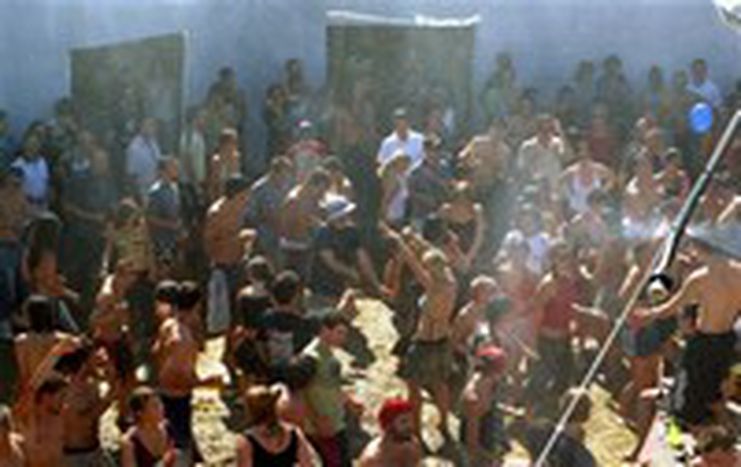 The madness of Sziget

Between August 9-16, 400,000 spectators will come together at 400 concerts during the Sziget festival in Budapest. Since its debut in 1993, the music festival has become a reference point all over Europe

It is the middle of August. There is a scorching sun overhead and the smell of alcohol and sweat in the air. Hippies, crested punks and sundry other characters have begun to gather in front of the main stage. They are mostly speaking Hungarian, but you can hear the sound of German, French, Dutch and Italian… As the band starts to play, the festival begins.

Despite the congregation of punks and hippies, the festival tries to reach out to all members of society. Andrea Vidó, one of the organisers, claims: “Our festival covers almost all the branches of the arts. From dance and dramatic arts to the most diverse kind of music, from fine arts exhibitions to street performances – you can find it all here! Sziget is like having many different festivals in one place, as well as being the biggest youth camp of the region.”

In the heart of the city

Over the fifteen years of its existence, Sziget has not only gained an international reputation –it has also influenced the musical taste and the way of thinking here in Hungary. People’s eyes no longer fasten onto the sight of a punk sporting a bright red mohican.

However, plenty of people are unsure whether this is a good thing. Sziget is organised in the heart of Hungary’s capital. The massive growth of the festival is causing a headache for the organisers, and for the inhabitants of Budapest who live close to Hajógyári-island, where the festival is based. In 1997, a scandal erupted after the sound levels from the amplifiers of the concert gave rise to a petition from the local people campaigning against the festival. A few years later the creation of a tent for homosexuals caused much the same sort of outcry. Ferenc, a 52 year old engineer who acknowledges the importance of the festival for the tourist industry, still thinks that “Such a festival should be organised in the outskirts of Budapest rather than in the heart of the city.”

Despite its international status, most of the visitors to the festival are young Hungarians. Vera, a 25 year old student, says “For me Sziget means freedom. It’s a multicultural party, where everyone tolerates each other.” Some though, are not so happy about Sizget’s growing international popularity. In 1993, it was a small festival, set up by a couple of Hungarian musicians. Laci, a 27 year old economist, has been visiting since the beginning. “The festival has lost its original atmosphere. Now, it is not like ten years ago. Today, Sziget has become an advertising media” he claims mournfully.

The bright side of life

That said, many people take a positive view of the festival. According to Nóra, a 24 year old journalist, “It is a very good thing that Budapest gives a space for such a huge festival as it increases the international notoriety of the city. Nowadays, many young foreigners identify Budapest with Sziget.”

The festival is also very profitable for many Hungarians. In 2005 a small business was started, offering a taxi service from the city centre to the island. In the days running up to the festival it is noticeable that the prices in the small pubs close to the entrance of Sziget increase significantly. This year, with names such as Radiohead and Franz Ferdinand playing, the festival is set to be as successful as ever.

Sziget Festival: from 9th to 16th August in Budapest

This year cafebabel.com will be at the festival. We will be offering several debates and some fascinating programs. Further information is available now in the “What’s On” section.