Red lipstick on riot shields, hugging police officers as a sign of non-violence... In 2015, Macedonia witnessed its first "women’s revolution"– as people called it – showing that the so-called "weaker sex" wanted to bring positive changes to society.

Macedonia was once the most peaceful of republics in the Yugoslav Federation. In the 90s, it left the socialist "kingdom", having faced neither a single fired bullet nor civil unrest. In recent years, however, social discontent has been growing in the country, leading to an unusual wave of uprisings in which women stand on the front lines.

In 2013, amendments legislating abortion mobilised hundreds of young girls and women onto the streets of Skopje. In Tito's Yugoslavia, it was enough to see a gynaecologist to talk about abortion, until Parliament rushed to pass a very restrictive bill on the termination of pregnancies. Although Macedonian women’s rights may have been at stake, the law finally passed.

This was a real scandal for Savka Todorovska – the renowned President of the Union of Women’s Organizations of Macedonia. Todorovska recalls how women’s rights were better protected in the communist era. "For example, there was a Court of Associated Labour. If women's rights were violated in certain sectors, she had the right to appeal and this court always helped her. When I look back I realise that Macedonian women had all the rights, but were not aware of that." 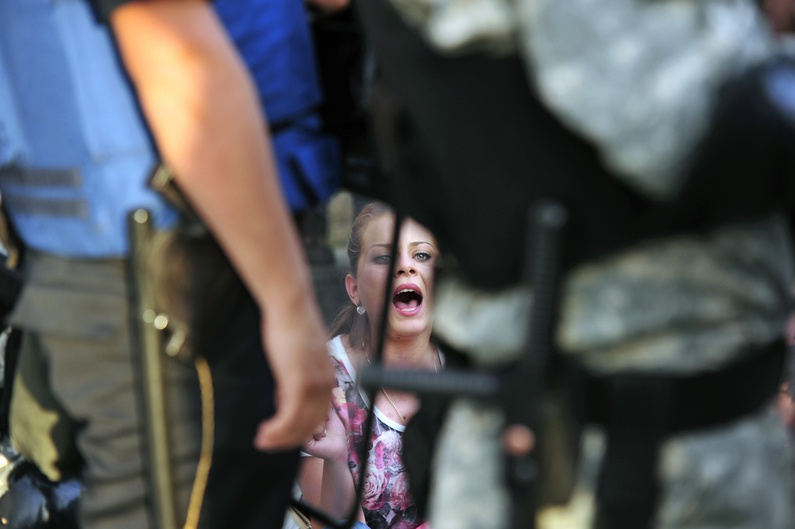 Today, women's rights "exist only on paper", Todorovska adds, "but in this capitalist system, employers only care about their own interests. Women are often disadvantaged, working nights and weekends, despite not being able to find childcare facilities that are open during these later work hours. It was easier to reconcile work and family under the communist regime. Back then, a woman wasn’t allowed to work more than 8 hours, and could shorten her work hours to breastfeed her new-born child."

Curiously, this cruel discrimination in workplaces is not reflected in politics. In 1991, there were only five female members of Parliament. Now there are 42. According to the 2014 Annual Report of the Ombudsman, of the 108,848 employees in administration, 52% are men and 48% are women. But the number of men in managerial roles is higher than that of women, though there are more women with advanced degrees. The publication 20 Years of Independent Macedonia released by the State Statistical Office, states that there are more women with Master’s degrees and PhDs than men.

Earlier in 2015, there was another scandal. According to opposition’s allegations, over 20,000 Macedonian citizens had been wiretapped. At the end of 2014, one of the largest protests in the history of Macedonia’s independence took place, with mass gatherings of the so-called "Student’s Plenum" in Skopje, which were later joined by thousands of citizens and members of other movements. They all finally united under one banner: Protestiram! 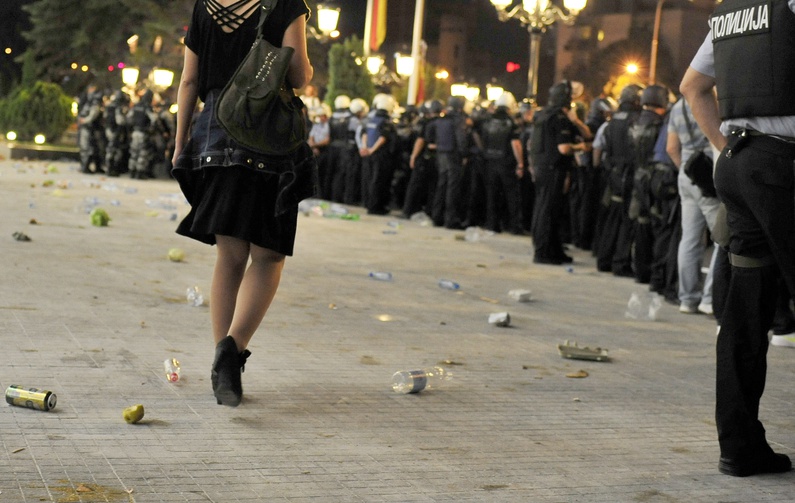 30-year-old Jasmina Golubovska became an icon of the 5th of May protests when a picture of her standing in the crowd trying to kiss one of the police officers’ shields made headlines. "We had been standing for almost five hours in front of the government", she recalls. "We had been constantly talking to police officers, persuading them to put their shields down. The police officer that stood in front of me was very angry. I asked him if I could draw a heart, he did not let me and threatened to arrest me. After some time trying to draw something, I asked if I could apply lipstick and afterwards I kissed the shield. Among other things, the whole crowd was looking for red lipstick to mark the blood that has been shed all these years."

Golubovska studied in Italy, earned a Master’s Degree in Bologna and returned to Macedonia in 2009. She says she hasn’t stopped protesting since. "We call it a women’s revolution. Women bear the burden although misogyny is one of the tools used by this government to reduce women’s position and importance. It turned out that women are more courageous in answering tough questions, such as about the LGBT community, whose answers the public may not be ready to hear. Women have had to take on the role, since they were personally attacked," says Golubovska.

The way women took charge of the protest had never been seen before in Macedonia. They use very different "weapons": they hugged police officers or kissed riot shields or linked hands in front of the police cordon. "Women were present at all major political protests," says Uranija Pirovska, Executive Director of the Helsinki Committee of the Republic of Macedonia, who fought the restrictive new abortion law. "The fact is that I’m a woman, and the idea that I have to be at the back because of my safety is simply no longer valid. On the contrary, women have shown that they are a relevant and equal segment when it comes to fighting against the regime."

For minorities living in Macedonia, the problem of discrimination against women is even more acute. The Albanian minority, for example, represents up to 25% of the population in Macedonia, according to the 2002 census. According to the head of the Women's Forum in Tetovo – Xane Kreshova – women are still not considered equal to men in the Albanian community. "When I came to Tetovo in 1983, women could not be seen in public; it was unthinkable to see women go to pastry shops to eat alone. While Yugoslavia still existed, Albanian women were not allowed to work," says Kreshova, who was a housewife before becoming an advocate of the Women’s Forum. "Their duty was to marry, give birth to children, and care for the family." 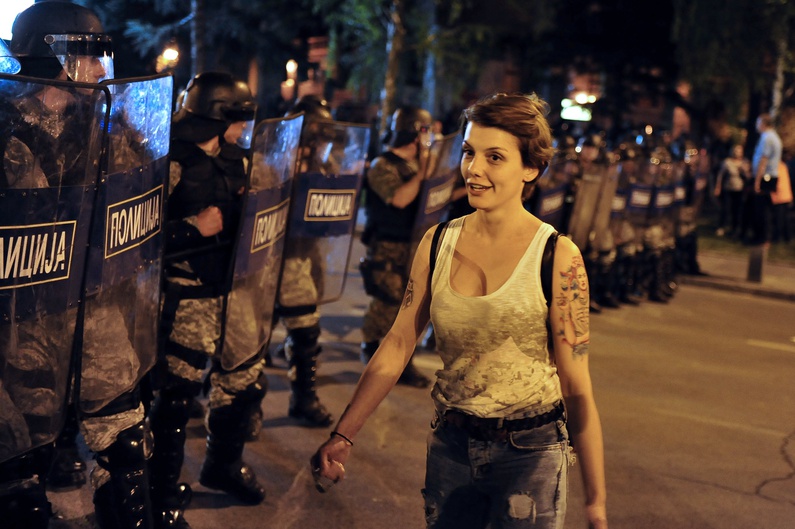 Kreshova says the situation of Albanian women changed with the opening of the South East European University in Tetovo, when it became an "open city". Kreshova thinks that education has changed the perception that Albanian women should stay at home. "I’m glad that women nowadays want to work," she says. "Men also seek jobs for their wives. They want to live a better life and provide better living conditions for their children – except for maybe people living in rural areas."

Mersiha Smailovikj, a 31-year-old human rights activist known for her assistance to refugees, has taken part in nearly all the protests in recent years. "I think I should be active because there are so many problems in our society." The starting point of her engagement was in 2007, when, as a senior student and Muslim woman, she was not allowed to wear a headscarf for her national ID card photograph. "As I’ve been wearing a headscarf since 2005 and it was my decision, I did not take it off and said that it was my constitutional right. I called a press conference, and within a very short time, the law changed," says Mersiha. "That was when I realized that our voices have power." 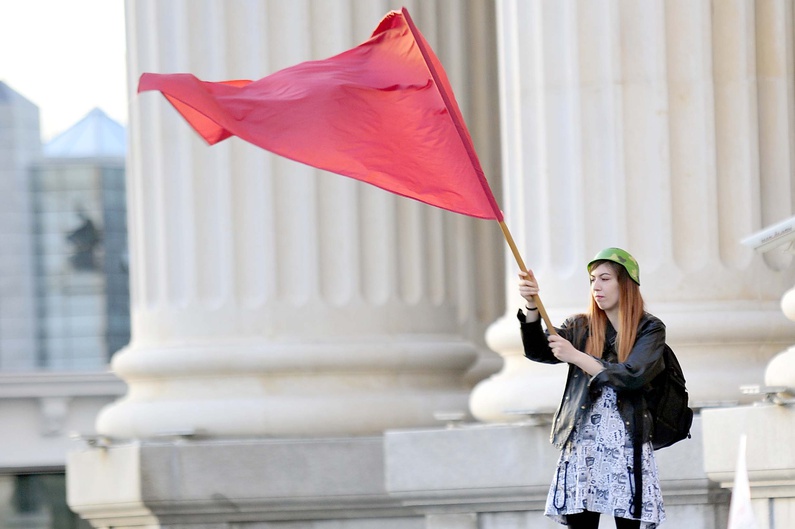