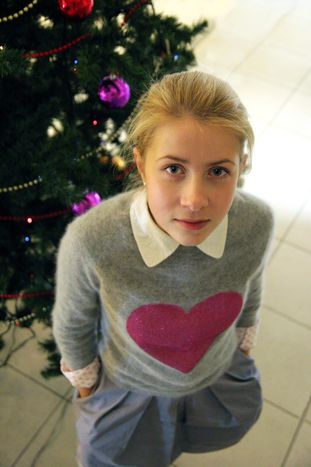 The ladies who oppose Belarus in Vilnius

Belarus is just 40 kilometres away from the Lithuanian capital. Belarusian human rights campaigners use Vilnius as an asylum and distribution centre - yet the Lithuanian president keeps up a good relationship with the Belarusian despot

The centre is so hidden that even the KGB hadn’t yet found it: who would voluntarily go along the kilometre-long rows of prefab houses and industrial barracks? Even someone who arrived at the destination would pretty quickly turn around again: the building appears abandoned, the sign on the door looks the worse for wear and there’s no bell. Only those initiated come across the threshold – to be surrounded by a hectic hustle and bustle.

Olga Karatch, the leader of the human rights organisation Nash Dom (‘Our Home’), explains the plan for the coming weeks to two colleagues who have arrived from Minsk. Together with 300 volunteers they distribute the organisation’s newspaper throughout the country: 150, 000 copies – otherwise only the state media achieve such a high circulation. Karatch sounds breathless, as though the future of her country could be decided in the next weeks – after seventeen years of falsified elections, there will be changes to the constitution and political persecution.

The 33-year-old gave her entire youth to the struggle against the Belarusian despots. By the time she got married, the activist was already so well known that KGB workers shadowed the celebration. ‘They took it for a conspiratorial gathering,’ she says. For a long time her office in Minsk was a favourite destination for secret service raids; during a workshop in April 2011 eighteen leaders of the organisation were arrested for several days and Olga Karatch was beaten up. She’s been arrested ‘fifty or 100 times’, sometimes on a daily basis, and sometimes with the threat that her dog would be shot or she would be raped. The young women talks about this matter-of-factly, as if she were discussing a heating bill. ‘It’s a great burden for our organisation; we can’t afford to keep up the solidarity campaigns and lawyers on a long term basis.’ 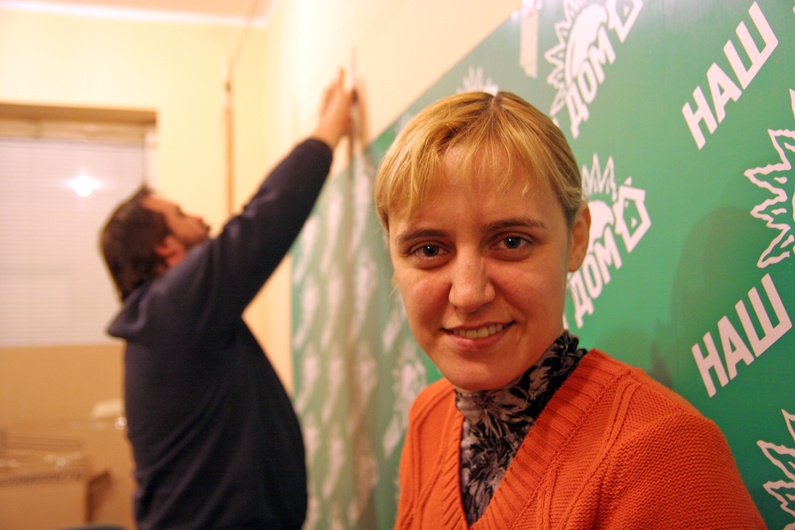 Since the peak of protests in Belarus– with the demonstrations after the elections on 19 December 2010 and the ‘dumb revolution’ in summer 2011 – the neighbouring EU town has become more important as a distribution centre. The European humanities university (EHU) reopened here alongside numerous NGO offices after being banned in Minsk. The activists didn’t choose the Lithuanian capital haphazardly: Vilnius is the first frontier post of the EU, lies forty kilometres from the Belarusian border and is three hours by train away from Minsk. It’s also has a close emotional tie: ‘Vilnya’ was the cultural centre of Belarus in the nineteenth century. Today, over twenty thousand Belarusians still live in the city.

While Vilnius hosts the opponents of Alexander Lukaschenko, the Lithuanian president Dalia Grybauskaitė keeps up economic and diplomatic contacts with the dictator who is to a large extent internationally isolated– the Lithuanians thank her with high approval ratings. Belarus is an important trade partner for the small, economically weak Lithuania. However, August showed what the cooperation with the regime can lead to when Lithuania released bank account details of the Belarusian human rights activist Ales Byalyatski and so contributed to his being sentenced to four and a half years in prison.

One year after the hopeful – and fruitless – mass protests in Minsk, the activists feel like Sisyphos: only their black humour saves them from resignation. Caricatures of Lukaschenko are circulated. When one young translator can’t think of the word for ‘elections’ she jokes, ‘No wonder, I haven’t experienced any anyway.’ They know: as long as Russia continues to support Lukaschenko financially, the Belarusians will continue to suffer their fate rather than rise up and take a stand.

Even the exiled university EHU, once a bastion of political opposition, seems to have gone into an enchanted sleep. Nomore than 15% of students are politically active, Kasia Stsiapanava estimates. The journalism student is also involved as an observer at elections and a speaker for the Belarusian human rights house (HRH). She argues that younger students in particular, who were born when Lukaschenko was already in power, often come to EHU merely because of the career opportunities. 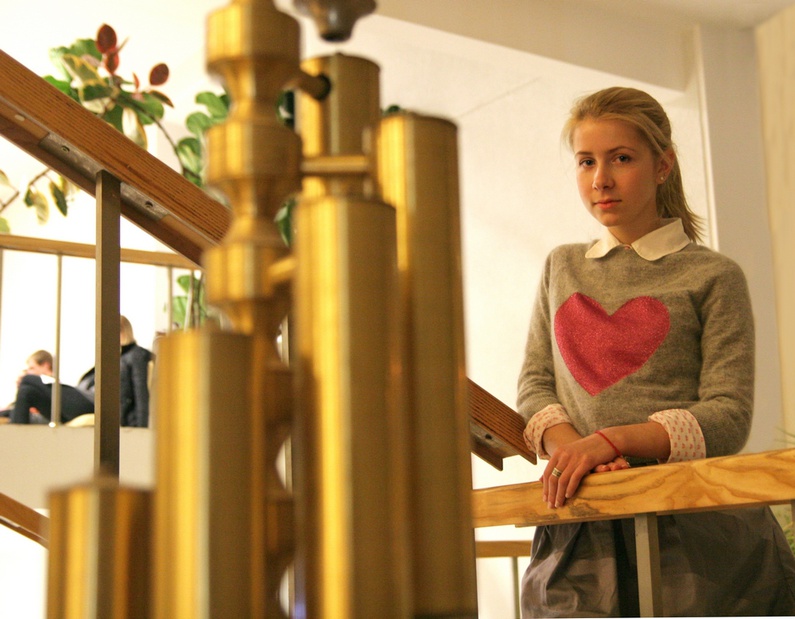 Rumours are spreading. Apparently the KGB hires students to report on their course mates. Stsiapanava nods. ‘I think that’s quite probable.’ On Christmas eve last year she herself was arrested at the border and put in a KGB examination cell. ‘The officers tried to interrogate me on whether opposition candidates had encouraged us students to go to the protest in Minsk, and whether I was a ‘good’ or a ‘bad’ elections observer.’ At first glance, Stsiapanava appears sweet and vulnerable – an easy victim, the border guards must have thought. How wrong they were!

As the daughter of journalists critical of the regime, Kasia Stsiapanava was ready for a potential arrest; on her way into the interrogation she gave her parents a telephone interview which was broadcast live. The tables were turned in no time: her father threatened the KGB agents on the phone; other journalists reported about the case and encouraged the 21-year-old. After four hours Stsiapanava was released, the wiser for her experience. ‘The KGB is also just made up of people – and some are more stupid than we believe,’ she says. ‘Each time I cross the border now I see the men who arrested me last year. I see them flicking through my passport for just a little too long; I see them recognising me and I see their faces turning red with embarrassment. 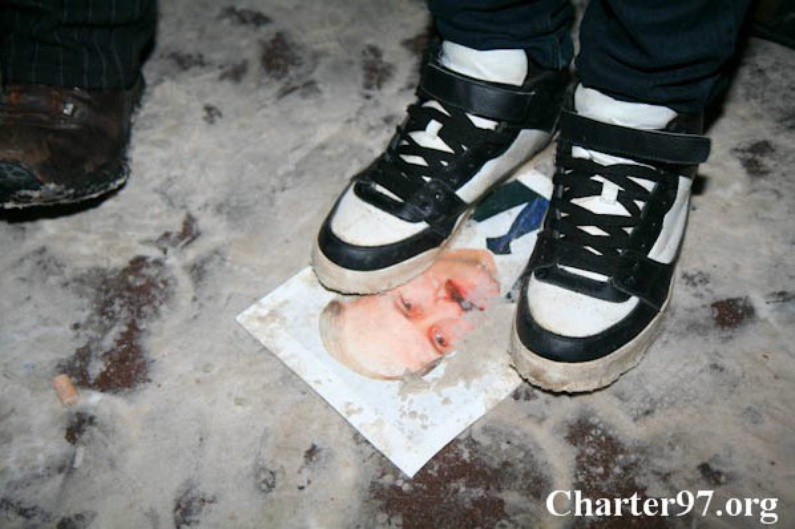 It has turned cold in the new Nash Dom centre and the colleagues cling on to their tea cups, shivering and exhausted. As if to reassure herself, Olga Karatch runs a comb through her ponytail again and again. Behind a chaos of notes, saucers and flyers a plastic christmas tree sparkles in a neon light. Karatch still doesn’t know whether she’ll be able to spend christmas at home. The year of the Arab spring ends with a Belarusian winter in Lithuania.

Many thanks to the team at cafebabel Vilnius including Daiva Repeckaite. This article is part of the second edition in cafebabel.com’s 2010-2011 feature focus series on multiculturalism in Europe