The "John Oliver effect" and the French elections

Ubiquitous in the Elysée race, satire is rooted more than ever in political humour. Less than ten days away from the French presidential elections, we take a look at the new generation of satirists that are making serious waves.

The format is familiar. A window in the top left-hand corner of the screen scrolls through photos. In the middle, a bespectacled man sits at his desk, making jokes out of serious issues. Since April 2014, the format of John Oliver's show hasn't changed. The British comedian has brought joy to millions of people from his 'faux' office on the set of the American late-night show, Last Week Tonight. But it was on the night of 1 July 2014 that John Oliver forever changed the way that American comedians covered politics.

That evening, the fifth episode of Last Week Tonight focused on a subject that mystified most: net neutrality [the idea that everyone on the internet should have the same access to the same data, Ed]. Yet, in the space of 13 minutes, Oliver had provided a clear analysis of the issue, making references to Netflix, Google, Usain Bolt,  Superman and Mein Kampf. At the end of the segment, Oliver urged audience members to submit public comments through the  Federal Communications Commission's (FCC) website, whom he accused of eradicating unalienable rights for 2.0 citizens and creating a two-tiered internet. The following day, the site was flooded with millions of comments. Six months later, the FCC backtracked on its decision and enacted net neutrality rules.

Today, we call this the "John Oliver Effect." In January 2015, some days before the independent agency tasked with regulating interstate communications, backtracked on its decision, an article from Time rolled out a series of political measures, during an episode of Last Week Tonight. After Oliver commented on the injustice of housing conditions in New York, the mayor announced reforms. Sepp Blatter, the former president of FIFA, resigned shortly after Oliver brought attention to corruption within his inner circle. When he tackled the issue of police accountability, the Justice Department placed restrictions on police power.

During the US presidential elections, the "John Oliver Effect infiltrated the American mainstream. There was plenty for the British host to ridicule and sartirise. Since the inauguration of Donald Trump, comedians like Stephen Colbert, Samantha Bee, Trevor Noah and (to a lesser degree) Jimmy Fallon have been hellbent on ripping the new Republican administration to shreds.

For Jeremie Maire, a journalist at Télérama, Trump's victory presented a wealth of opportunity for political commentators to make their mark. Referring to a 'polarisation of satire' in late night talk shows, he has observed a renewed public interest in this way of talking about politics. Although at one time, it was far ahead the others in terms of viewing numbers, The Tonight Show with Jimmy Fallon is now losing out to its rival Stephen Colbert's The Late Show, which is much more politicised. Yet a comparison of the two shows reveals that they use many of the same ingredients: a satirical tone, mocking humour and the elucidation of esoteric concepts. Their influence goes beyond the small screen. Some segments have been shared on social networks, and even by more traditional media outlets. It's safe to say that Oliver, Colbert et. al have become "the new political rock stars."

In her 2011 book America According To Colbert, Sophia McClennen, director of the School of International Affairs at Penn State University, explains that satire serves as an antidote to anti-intellectualism and sensationalism - two scourges that she feels have become increasingly widespread in post- 9/11 America. Six years down the line, she believes that Stephen Colbert has become the new bastion of "anti-Trumpism." McClennen's premise is clear: satire is intelligent. She reiterates that "to understand a joke, you need to think about it." The truth is that viewers of these satirical programmes need to be better informed and less easily led by populist theories and other "fake news." Meanwhile, a study published in 2012 by the Pew Research Center, showed that 54% of viewers of The Late Show are up-to-date on current affairs, compared with only 35% of those who watch Fox News.

"The press is changing"

On the other side of the Atlantic, it is difficult to find shows that offer such an astute analysis of, and satirical approach to, politics. That said, the proliferation and growing influence of some parodic news sites in France leads one to think that the country does indeed enjoy satire. Far ahead of its competitors, Le Gorafi is one of the best of the French satirical news sites. A parody of the daily conservative paper Le Figaro, this pure-player, was launched in 2012. Five years after its inception, the newspaper receives three million visitors a month. The reason for its success? "A societal need to find an alternative source of information," according to Sebastien Liebus, co-founder of Le Gorafi. "People really feel the need to see the world through a different lens," he adds. Since 2013, after the publication of a certain article involving a pain au chocolat, the French are increasingly reading articles with headlines like "Benoît, every racist's 'black friend'" or "Nicolas Sarkozy refuses to pass on the nuclear football."

Idriss Abassi is a regular reader of Le Gorafi. He explains the site's popularity by the fact that it "combines politics with pertinent humour." The young Parisian law student thinks that greater neutrality in the media results in more consideration and less prejudice. His response is in keeping with the results of the last survey published by the newspaper La Croix in Februrary 2017, on the confidence that the French have toward the mainstream  media. According to the study, only 64% of those surveyed claimed to take an interest in the news. 58% of young people claimed to be markedly dissatisfied with "media outlets that have existed for more than 30 years." For Idriss, the media is "too idealistic." Does the general distrust towards media outlets extend to parodic sites such as Le Gorafi? Sebastien Liebus thinks not: "I believe that the press is changing. We take inspiration from media outlets such as BFM TV or 20 Minutes, that publish offbeat news stories to grab people's attention. From the start, we use some of their ideas but ultimately, it's them who copy us." 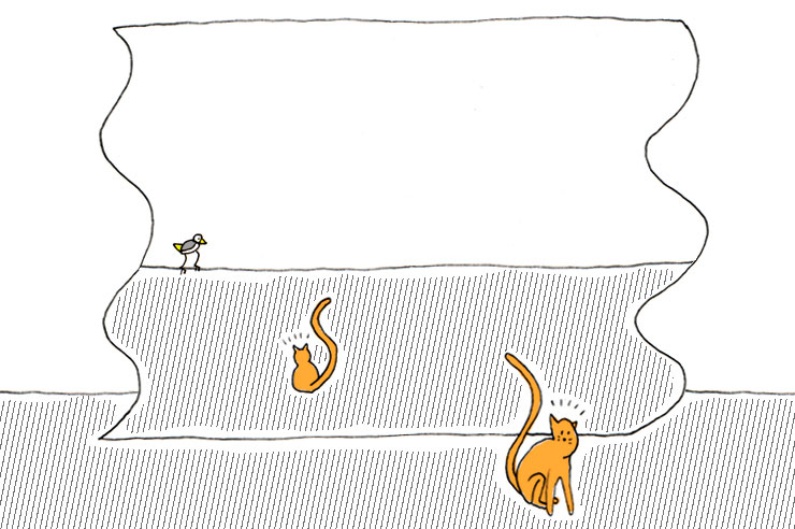 Sebastien Liebus believes that it is becoming increasingly difficult to compete with the reality of the era, which is becoming ever more absurd. Trump, for example, is very difficult to sartirise because he is so outrageous. The difficulty can be found in trying to be subtle, without becoming complacent. In this era of post-truth politics, it can be difficult to know who is broadcasting the real news. "We are living in an era of 'fake news', where we don't really know who is telling us the truth," he claims.

In the United States, the outcome seems inevitable: "Satirical programmes are becoming the main source of news among millennials," says Sophia McClennen. "Young people have found journalism that they admire in satire," she concludes. Their names are Stephen Colbert, John Oliver and Samantha Bee.

"It's up to you to reflect on satire"

At the intersection of media and politics, is the world becoming more entertaining? The growing influence of social networks like Facebook, Twitter, Instagram or Snapchat among 18-35 year olds marks a growing trend of "infotainment." According to a recent survey, a third of people from this age group no longer agree with the politics of traditional political parties, and reject discussions about classic politics. When you ask them why all they can do is laugh.

In France, a programme broadcast early evening represents this phenomenon well. Quotidien [meaning "Daily"], hosted by Yann Barthes, is broadcast from Monday to Friday to more than one and a half million viewers. The show has succeeded thanks to a tone that greatly appeals to Generation Y, inspired by the American late-night shows. Segments such as "Vu" or "4Q" mock the current political class, even if it means turning its back on the majority of its members, and its impact is only growing. Does this mean satirists have more of a responsibility? Sebastien Liebus is unequivocal: "We hate it when we have to shoulder the responsibilities. Let's not pretend to sermonise. Satire is a mirror held up to society. It's up to you to accept or reflect its reflection."

Those who combine humour and politics are often the object of reproach: mocking politicians is often the best way to create sympathy for them. During the presidential electoral campaigns of 1995 and 2002, many criticised the creators of Guignols de l'Info [the French equivalent of Spitting Image, Ed.] for having made Jacques Chirac seem 'nice.' Some went as far as to say that his marionette helped him to win the elections. But comparison is not reason, according to Liebus: "Questions were raised when we started a running gag around Emmanuel Macron and the search for his lost political programme. Many readers asked us if we weren't afraid of making him seem more sympathetic. But the answer is no, we have no desire to humanise any of the candidates, whatever party they're from."

In any case, Le Gorafi and Quotidien have already made an indelible mark on French politics. Days away from the first round of the presidential election on 23 April, satire and infotainment have had their small victories. Many political figures have come to fear the corrosive editorials of Quotidien, ever since their coverage of the resignation of the Minister of Justice, Bruno Leroux. As for Le Gorafi, they're continuing to polish and fine tune the satire that the mainstream media, and even some politicians, have taken to heart. Jean-Luc Mélenchon, who's enjoying a surge in polls this week, used the name of the parody site to mock a Figaro cover story about his programme. By pointing at the copy to mock the original, could politicians use satire to their benefit? We might have to keep looking to the likes of John Oliver to find out.