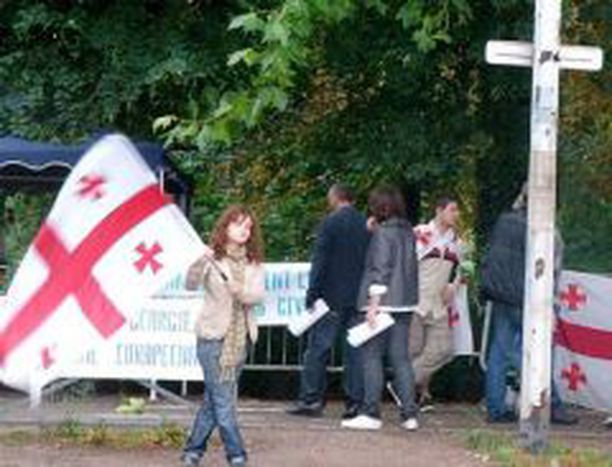 The Georgians mobilise themselves in Strasbourg

Ossetia is located in a mountainous region and is inhabited by Georgians.

As the Soviet Union collapsed in 1992 Georgia broke away from Russia, whereas the South Ossetian separatists declared their independence from Georgia and in doing so expressed their desire to be affiliated with the Russian Federation. From then on there has always been tension and conflict. The situation escalated on the 7th of August when two Georgian soldiers were supposedly killed and three were badly injured in the Ossetia region. So far there have been no independent reports on the incident. The Georgians reacted promptly with extensive air and ground assaults as they sought to “protect the sovereignty of the country.”

On the 8th of August the Russians intervened in the conflict. Prime Minister Vladimir Putin called for a counter-strike against Georgia, effectively declaring war. Russian President Dimitri Medvedev indicated that the murder of his fellow countrymen would not be allowed to go unpunished. Russia then sent tanks to South Ossetia in order to provide support to the separatists. Even the Russian air force has engaged itself and begun numerous air raids outside the Ossetia region. Georgia in turn has accused Russia of invading its territory and targeting an oil pipeline that reaches from Asia to Europe. On 12th August the Russians received orders to withdraw from the South Ossetia region. During EU President Sarkozy’s visit to the crisis region, a peace treaty would be negotiated, which could be accepted by both parties. In the meantime, however, the situation remains tense. As the opposing forces continued to threaten each other, the fighting carried on. Café Babel Strasbourg met a number of Georgian demonstrators who have become active since the start of the conflict.

Since the conflict began Georgians from Strasbourg and the Alsace region have expressed support for their country in front of the Council of Europe. Posters, flyers and speeches made by the movement have given out the message that Georgians in France are prepared to fight their cause. One young Georgian, full of enthusiasm, confirmed this; she stated the pacifist intentions of the gathering in front of the consulate in Strasbourg, situated in the heart of Europe. The number of Georgians participating in the demonstration has grown to over 60 in a short space of time. Those sympathetic to the Georgian cause have also joined the students and workers of Georgian origin in commemoration of families left behind and those who had taken vacation there shortly before the conflict broke out. The protests in public spaces have aimed to make passers-by aware of what is at stake in this conflict. While some written statements regarding the current situation have been distributed, large red and white posters have also been put up. Some timid car horns sounded their approval from the streets surrounding the EU institution. On the part of the members of the Georgian consulate, the support appeared to be much more pronounced. The young demonstrators said that updates on the situation were regularly delivered to them. The latest news at this time; a peace plan has been created, which will be supported by the EU. However, this will not be able to mislead the demonstration’s leaders. They will not be ready to leave their posts just yet. Quite on the contrary, they are prepared to continue with their presence on the streets of Strasbourg until the situation settles and the conflict can be brought to a peaceful conclusion.