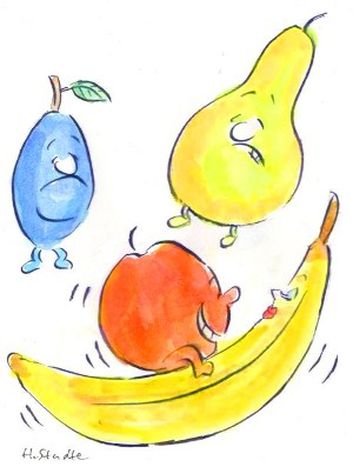 The fruit are crazy

Humans call each other all sorts of things. On a daily basis we are compared to other humans, body parts, even animals.

But none of that compares to being called a fruit. The poor prune comes in for a tough time from the callous humans. In French, rather than being given a fine, you are given a prune. Maybe it is as a result of the fine that in England people who look bitter are said to have a face like a prune. The Germans don’t like the pflaume much either: but this time it means stupid rather than bitter. Thankfully for the prune, the Neopolitans call the stupid percuoco: a variety of peach, and for the French, only the silly can be prendre pour une poire.

Apples get a better deal. In English, your lover is the apple of your eye. So strong is the force of the apple that in France to tomber dans le pomme is to faint. It is enough to think that the world has gone bananas…

And if that is what we call the fruit: one can only imagine what they call us.