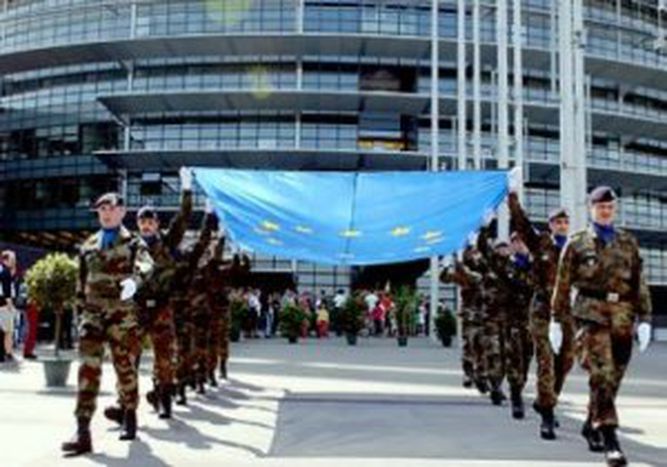 The Franco-British Defence Deal: A first move towards a European Army?

By Savino Rua, member of the Union of European Federalists The United Kingdom and France have concluded this week a military cooperation agreement covering, among other issues, the establishment of a joint combined force, the sharing of military assets and information and even cooperation in managing their atomic arsenal.

Should this be seen as a positive development on the way to a common European defence? And if so, under which conditions could the entente be Europeanised?

The main protagonists of the agreement, Mr Cameron and Mr Sarkozy, have both emphasized that the deal in no way represent a reduction of sovereignty – or a move towards a European army. Rather, they insist that the deal should be seen mostly a cost-efficient solution for defence in a time of budgetary restraints. However, the accord is historical and its consequences, both intended and unintended, could alter radically European defence in the incoming years.

As in other cases, as for instance Schengen, it might be possible that what starts as purely intergovernmental transforms itself into a European instrument or framework. Borders are as much part of national identity as armies and especially atomic arsenal, so I believe there is ground to be optimistic. Moreover, if the deal surely represents a powerful precedent for further cooperation among other European countries: if France and the UK do it, why not think of Italy and Germany for instance going on the same lines? Defence ministries in all of Europe will be following the accord closely in the next months…

However, what could trigger the Europeanisation of this deal, in other terms what might move intergovernmental "enhanced cooperation" in European defence from a bilateral beginning to an EU-wide end? I believe that some factors could play a role here.

First, the current economic crisis represents a clear window of opportunity for more rather than less Europe in defence: why not pool together resources in such an expensive field as defence in times of economic distress and budget cuts? The EU should further emphasize the utilitarian aspect of more cooperation in defence, marketing it as a smart and sustainable solution on economic grounds first and foremost. In short, Europe shall prove that it can really provide an added value in the sector. Building on the example set by the UK and France will surely make the argument more convincing.

Secondly, the Union clearly needs more vision when it comes to defence. Military missions are not enough. The EU should catch the momentum and try to exploit all the possibilities offered by the Treaties, including the currently ill-defined mechanisms of "permanent structured cooperation", envisaged by the Treaties.

Finally, there is of course no need to reinvent the wheel when it comes to the Europeanisation of intergovernmental agreements. The Schengen case represents a good example. It all began as a deal between five European countries in 1985 to lead to the Treaty of Amsterdam incorporating the acquis into EU law in 1997. Legally the matter is surely different and might be much more complex, however the path to be followed should be rather similar: intergovernmentalism first, then Europeanisation.

In conclusion, the “new entente” between the UK and France could represent a milestone towards common European defence. The EU should exploit the momentum, use sound economics and the compelling logic of saving to convince more countries to move forward in defence cooperation, be bold and exploit fully the Treaties and finally follow its previous success stories. The crisis provides an opportunity for increased added value in European defence that the Union should not waste. After France and the UK, it is time for all of Europe to enter a new era of defence cooperation.