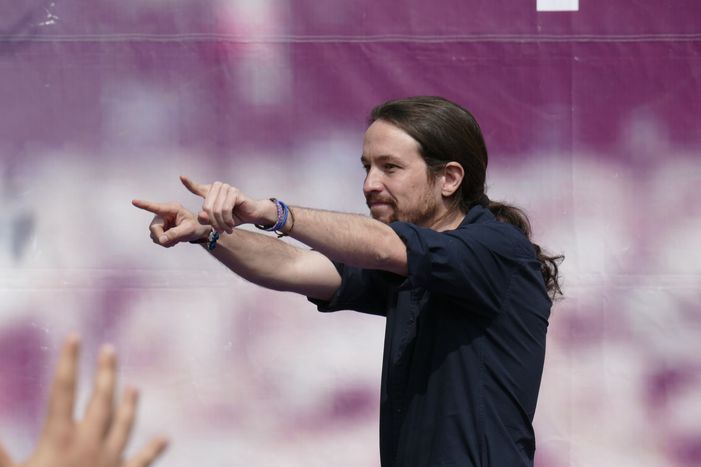 The first 3 measures Podemos will put in place

In a cafébabel exclusive, we reveal the first three measures that Pablo Iglesias Turrión, founder of the Podemos party in Spain (2014), plans to put in place if his party is elected in Sunday’s elections – and surprisingly, the EU is a major feature.

This plan provides for 3.5 billion euros to be spent each year on adapting residential buildings to conform to energy efficiency standards recommended by the EU. In so doing, it also intends to create 300,000 jobs in the first year. According to Podemos, this move will offer the dual benefits of both offering a conversion solution to the construction industry, making it a relevant and competitive industry both in Spain and abroad, and instigating a much-needed reduction in the country’s energy imports. Spain currently imports 70% of the energy it consumes (one of the highest rates both in Europe and the world for a country of its size) – 80% of its fossil fuels and 90% of its coal. This dependence “makes improvements in productivity highly volatile and prevents the country from developing production model strategies that are stable and viable in the long term”, according to a source close to the party. This energy translation plan hopes to put a stop to the stifling of national renewable energy industries that has been going on since 2012. Yet the question remains: how is this plan going to be financed? Podemos plans to take advantage of the sentences issued by both European and national courts against Spain’s major energy companies for having collected, at the end of the 90s and beginning of the 00s, 3.5 billion euros of “transitional aid for the competition regime”. Neither the PSOE (Socialist Party) nor the Partido Popular (People’s Party) has ever demanded that these multinational giants pay back this debt, but Podemos are promising to do just that. Yet although this approach seems to already have the support of a supranational authority, it remains to be seen how long it will take to bring the case before the courts. Podemos might find themselves met with a wall of bureaucratic silence and fail to get anything back from the multinationals.

This measure takes its inspiration from the philosophy and experience already successfully developed within the European institutions. In essence, the idea is to prevent ministers, MPs and their assistants from sitting on the executive boards of large businesses within the sector in which they have held an institutional role. Podemos also wishes to create a register which clarifies the relationships between pressure groups and senior officials, executives and politicians. The objective behind this move is clear: Podemos has promised to tackle corruption and ensure that the relationship between certain pressure groups and political decision-makers does not interfere with free and fair market competition.

Once again, this is a laudable initiative, for as European citizens, Podemos’ voters have expressed a desire for more transparency from their political representatives. Nevertheless, we have seen only recently how the battle against financial lobby groups and attempts to untangle issues of corruption at European level can become just as much tilting at windmills. If Podemos’ plan succeeds, it will take time. A long, long time.

According to Podemos, it’s time to start “saving people”. Having made social issues their priority, one of the key measures the party wishes to implement in this area is the distribution of the so-called “social dividend” – to help families, entrepreneurs, SMEs, the long-term unemployed, job seekers, young people, domestic violence victims… But how?

The party’s first proposal is that entrepreneurs and SMEs will not have to pay VAT until they have collected their payments, nor pay social security contributions until they are making a profit. They are also promising to establish a guaranteed minimum income of €600 a month, as according to Podemos, it is literally impossible to survive in Spain on a lower monthly income than this. For workers, the party plans to increase the minimum wage from the current rate of €658 to €950 by 2020. As regards welfare payments, Podemos is talking of passing a law which would oblige administrations to distribute these payments before paying the exorbitant fees of senior or the administration’s own expenses. There are also plans to provide guaranteed accommodation for women who have suffered domestic abuse, along with their children, with no need to take their case to court first (54 woman have died at the hands of their partners so far this year). For researchers, Podemos, intends to raise levels of public investment to 3% of GDP by 2020, as recommended by the EU.

This Citizen Rescue Plan is Podemos’ main emergency measure and perhaps the cornerstone of the party’s political strategy. Why? Because its focus lies firmly with those who have helped build the party: the citizens of Spain. However, the proposed increase in the minimum wage will require moving a great deal of public money from one place to another, and Pablo Iglesias is yet to explain exactly how he plans on achieving this feat.