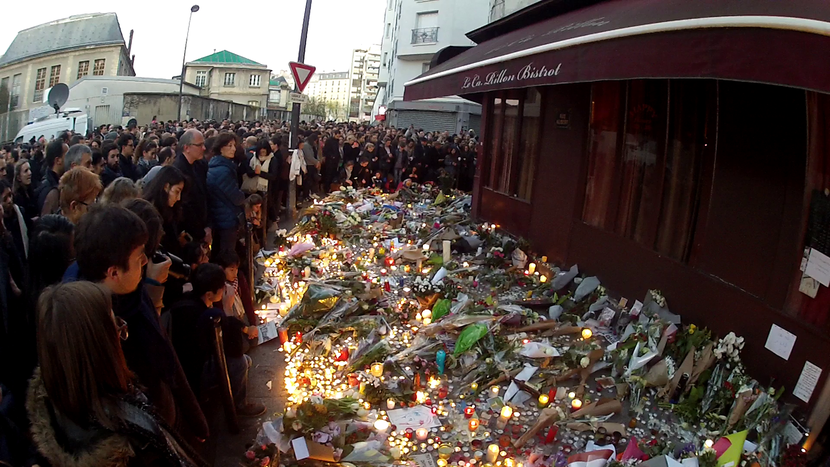 Friday 13th November 2015 – a day like any other, up until 9.20 pm, when the first alerts came through on our phones. The atmosphere in the Latin Quarter bar we were in gradually started to change, building to panic when a man ran past shouting that shots were being fired 500 metres away – which turned out to be wrong, but we decided to go home anyway.

What I'm about to describe isn't the night of the tragedy, but what happened on the following day, which was so strange for so many of us. We tried to go get on with business as usual – I tried to watch the Coen brothers film O Brother, Where Art Thou? – but it was no use. Everything took us back to what had happened the night before: photos of missing people posted on Facebook, phrases that will ring in our ears for some time to come – "This is just the beginning of the storm," or, "France is at war." Bit by bit, we started to take stock of the situation, though it wasn't until a few days after that the events really hit home. What would this mean for us, and for our daily lives? How will I feel next time I'm on a train in the rush hour? Several papers quoted people saying, "I'm scared of being scared," and that's something we're all feeling. To drive it away, we're turning the music up a bit louder than usual and forcing ourselves to dance. On my way to meet friends one night, I heard Cuban music coming from one apartment window, and rock music from another. The notes don't sound like they should, but we keep going because we have to. It's a way of clinging on to our freedom to live our lives as we want to – a freedom that's being torn from us.

On Friday night, our daily lives were affected – the road I live on, the bar I drink at, the concert hall where I hear my favourite bands play. We were punished for living happily and peacefully. Since that night, we're holding on twice as hard to that very freedom, but how can we live with a sword of Damocles hanging over our heads? "Our way of life's going to change, and that makes me incredibly angry," said illustrator and director Joann Sfar on the radio this morning. He's both lucid and enraged about the events. Fighting Kalashnikovs with ideas might seem a losing battle, and yet, he says, "Filth grows in empty spaces; we've let our children's hearts become barren."

"No child prefers Islamism to culture. They fall into Islamism when there's no library open in their area. Literature is richer than religious thinking, and we mustn't be afraid to say that," says Joann Sfar. 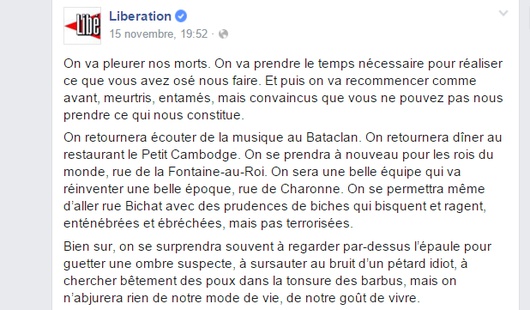 Translation of a post by Luc Le Vaillant for Libération magazine:

We will weep for our dead. We will take the time we need to understand what you have dared do to us. And then we will start to live again as we did before, bruised and cut, but sure that you cannot take what makes us ourselves.

Of course, we'll often find ourselves glancing over our shoulder at suspicious shadows, jumping at the bang of a simple firecracker or searching in vain for some meaning in the cut of a man's beard, but we will renounce none of our way of life or our taste for life.

Front National leader Marine Le Pen says she is weeping for France – the hypocrisy of it! Take back your tears, quickly. Where we are today is partly because of your marginalising rhetoric, your stigmatising of this religion for so long, your "French values" that are not my own, and your party's endless idiocy. You live in a France which belongs in the last century and which has no nuance, no colour and no difference. Historian and middle east specialist Pierre-Jean Luizard said in a recent interview, "In the areas that were attacked, you can see young people, with a cigarette and drink in their hand, mixing with people going to the local mosque. That's what ISIS want to destroy, by pushing French society and identity to turn inwards […] so that people judge others not by what they think or what they are, but by which community they belong to."

If our country is beginning to divide today, it's also partly your fault, Marine Le Pen. This morning, Joann Sfar was interviewed on the radio. If we want a political response to the tragedy, it's his words, not Marine Le Pen's, that we should listen to. I thank him from the bottom of my heart for saying, "It's time to be proud of our way of life."

History is written onto the fabric of our lives.