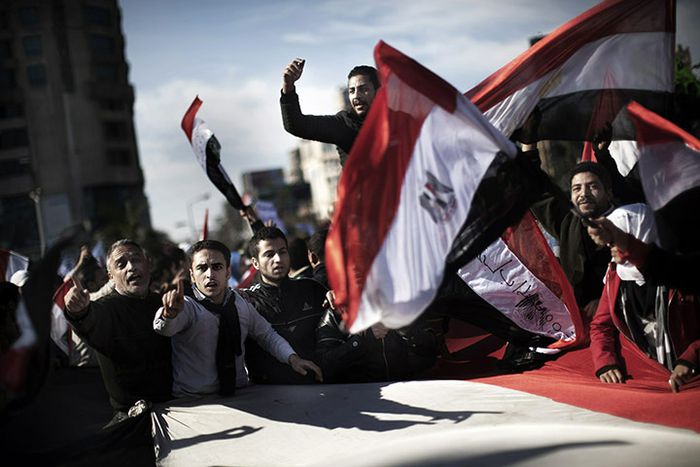 The Dawn of Democracy in the Arab World

By Lucio Levi, president of the Movimento Federalista Europeo and professor of Political Science and Comparative Politics at the University of Torino in Italy

come for the Arab people’s awakening. The “third wave” of democratization, as Huntington called it, started in 1974 with the Portuguese revolution, has not exhausted yet.

The EU and US governments have been caught by surprise by the masses’ spontaneous movement that invaded the cities’ squares of North Africa and the Middle East. In the name of the international stability they backed until the end the old, falling, oppressive and corrupted regimes in Tunisia and in Egypt and they accepted their fall with disappointment. The governments of the EU and unfortunately also the European Parliament did not find the words nor did they formulate any political proposal in order to intervene on the great on-going movement of liberation. After the decline of the US influence and with the absence of Europe, the international system does not seem to have the economic and power resources, nor the political view to positively affect the current events and to help and direct the transition to democracy.

It’s disheartening to observe how the European political leaders see the people’s liberation movement fighting against their government’s oppression only in terms of security, so that they just propose to send policemen to guard the sea-coast. This is the Europe that we do not want: the fortress Europe which closes on itself, which exhibits xenophobia, which excludes Turkey, because it is an Islamic country, which in the name of Christian religion represents its own God with the features of the Western man. The Union for the Mediterranean project (2008), which should have deepened the Euro-Mediterranean Partnership (1995), has failed. The meeting of the national governments who are members of this association, expected for 2010, did not take place. The free trade area, planned for 2010, was not achieved, nor did the European governments honour the commitment to interrupt the economic cooperation with the countries on the southern shore of Mediterranean Sea which do not respect human rights.

It should be noticed that the pattern of the enlargement, adopted for Central and Eastern European countries, and of their inclusion in the EU cannot be repeated in North Africa and the Middle East. An international organisation, based in this region – the Arab League – is the potential vehicle of a process of regional integration, which should include Israel, too. Unfortunately, integration is yet to come. If we consider Maghreb, only 1-2 per cent of these countries’ external trade develops within the region. And yet, the UN Commission for Africa reckons that the economic integration of Maghreb would pave the way to a 5 per cent growth of the GDP of the region. The EU, which has continued to have bilateral relations with North Africa, could have encouraged regional integration, as the United States did with Europe when it launched the Marshall Plan and the aid supply was subject to the condition that the reconstruction plan would be devised in common.

The bogeyman of Islamic extremism, which is shaken by Western governments in order to justify the support of authoritarian regimes, belongs to the logic of the past that does not consider the economic development, the social modernisation and the secularisation in progress in the region. The spread of education especially between the younger generations and the decrease of the birth rate, which is a consequence of the growth in women’s education, have brought the population closer to the values of freedom and equality that are typical of the most developed societies. These are the objective conditions which promoted the development of civil society and pluralism. Islamic fundamentalism is a reactionary movement which wants to oppose this trend. In fact, it seems to be the main looser in the on-going revolution. At the forefront of the movement there are the youngsters, who despite good education are penalised by the exclusion from the labour market. They used the new media for mobilisation, replacing the parties and other organisations of traditional politics. What strikes about this movement is the lack of leaders in the traditional sense of the word. The figure of a nowadays leader is the Egyptian Wael Ghonim, a Google official.

The unusual dimensions of the revolution show that the economic and social change, developed in the wake of globalisation, requires with it political and institutional changes. Therein lies the mystery that the “short-sightedness” of the Western political élites was not able to penetrate. It was not a mystery for Emmanuel Todd, who ten years ago (in his book Après l’empire) diagnosed the passage to modernity of the Islamic world and he foresaw the institutional change. It should be noted that the weak links of the Arab world, where the collapse of the old regimes has begun – Tunisia and Egypt – are countries without oil. The oil-producing countries, instead, have the resources to promote consensus through free service concessions to the population (water, electricity, education etc.). In fact, these countries show greater resistance to the contagion of the revolutionary movement.

The armed forces in Tunisia and in Egypt have the merit of having helped the fall of the dictatorships without a bloodbath, which unfortunately took place in Libya. The huge Tahrir square in Cairo, where the people that determined Mubarak’s fall has gathered, has not been a new Tiananmen It should be noted that the army played a progressive role on other occasions, first of all during the coup d’état of Nasser, which toppled king Farukh in 1952. After the Khomeinist revolution in Iran (1979), when the elections paved the way for the establishment of the Islamic republic principles in Turkey and then in Algeria, again the army prevented the success of Islamic fundamentalism. All over the Arab world the armed forces are the only structure able to direct the transition to democracy, with all the involved risks. For many years the risk that democracy will become an appearance rather than a reality and that real power stays in the hands of the generals will overhang Arab people, as the case of Pakistan shows. On the other hand, it should be underlined that the Turkish army relinquished power even because of the EU pressure during the accession negotiations with Turkey.

The examples mentioned above prove that elections are a necessary but not a sufficient condition for democracy. The transition to democracy will be a long process, full of pitfalls. During many years authoritarian governments destroyed (or did not allow the creation of) the essential social structures which can through elections pave the way to a democratic government: political parties, independent unions, civil society associations. The transition will be successful if the constitutional norms were elaborated; these norms ensure the creation of public spaces where the political debate and the choice of leaders take place in a free and transparent way.

On these bases Pan-Arabism would rise again as a solidarity force between people who chose freedom and who want to protect it, by creating common institutions and initiating a federative process within the Arab League.

This article was translated from Italian by Giulia Tartaglia.