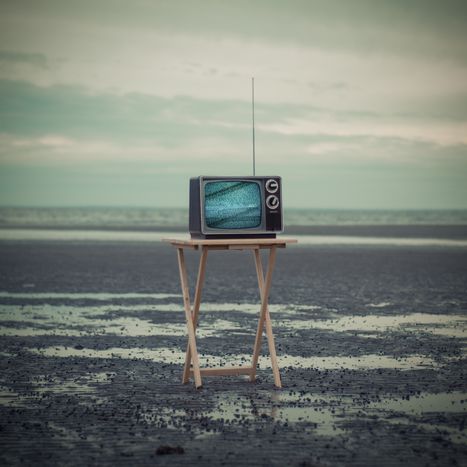 [Opinion] What is the difference between media and propaganda? In Greece, the gap may not be so wide.

Imagine that you are in a room full of open boxes. In the middle of the room there is a big red box, but it's closed. You don't know what is inside. Perhaps you are not that thrilled to discover... Despite your lack of regard for this box, it starts to get your attention when many loud, intense voices from around you warn you not to open it. Suddenly, you are in a fear-mongering situation where all these messages tell you how awful and unstable your life will be if you open this box. As the voices terrorize you, you become curious about this red box. So, are you going to open it?

With Greece facing a snap general election in just a few days, there is the genuine prospect of a radical left government coming to power for the first time in both Greek and European history. Having won last year’s European elections, the radical left and anti-austerity party Syriza is ahead. Syriza has been leading nationwide polls for months and the general sentiment among voters is that the radical left party will win. While Syriza is likely to emerge as the leading party, it is unclear if Alexis Tsipras, its 40-year-old leader, will have the numbers needed to form a government.

During this pre-election period, Syriza is blasted by a tsunami of propaganda and fear-mongering. Mainstream media are doing nothing but terrifying voters with frightening scenarios of impending catastrophe! From threatening headlines of Greece leaving the eurozone (a scenario with the new fancy name Grexit) to terrorizing reports that Greece would be economically destroyed and sink Europe along with it. This 'psychological war' uses scary bears that symbolise the 'The Russian War is Coming', from the newspaper Ta Nea, or headlines like 'Comedy and Tragedy: Bankruptcy, Exit from the Eurozone and Risk on the Borders', courtesy of Axia newspaper, to demonise Syriza. And if this is not frightening enough, the Monopoly man is running away with Greek deposits with the headline 'Risk of Bank Run like in 2012: 2.5 Billion Euros Have Already Left the Banks.'

This is not only a phenomenon in the newspapers. Greek TV programmes are operating in the same way. A large part of the so-called informing is nothing more than empty discussions and arguments about the menacing future under a Syriza government. Nevertheless, the major networks tend to invite the same politicians from the Greek coalition government, New Democracy and Pasok, to endorse their 'euro or drachma' dilemma, and of course, 'stability or instability'. Therefore, there are more than just a few people who rightly argue that the media in Greece are a propaganda tool. And the big red box stays closed in the middle of the room...

Although the Greek media continue to bombard their audience about the terror named Syriza, sometimes even they themselves find it difficult to make their case. Their intention is to create insecurity about a possible Syriza government, so verifiable facts don't seem to mean as much as they once did. However, there is a difference between presenting the news and the way in which the Greek media approaches its coverage.

The lack of objectivity in the mainstream media also interferes in the electoral poll results. Especially in the graphic presentation of the results. If you believe that 4.7% is below 4.8%, you probably live in a different world from SKAI TV network! 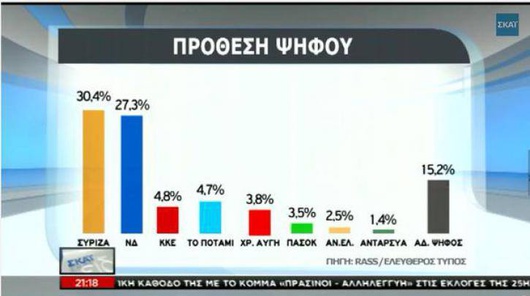 SKAI TV presented a graph of the Rass survey prepared by the Eleftheros tipos newspaper. SKAI indicated that the centrist political party Potami, who has 4.7% voter support, is clearly ahead the Communist Party, who scored 4.8%. SKAI goes even further in presenting Golden Dawn (3.8%) in red - and not the usual black - in proportions that are twice the size of the one of PASOK, who itself scored 3.5%. Is this information reliable, or is it just a really unqualified graphic designer?

We should not forget that mainstream media in Greece conceal distinguished opinion leaders' support for a Syriza government. This is another form of intervention, otherwise known censorship. Certainly, press and internet use some direct and discret methods to censor and interfere with online content, but how is this possible during a live talk show? During the broadcast of Forbidden Zone, a talk show, journalist Nikos Manesiotis attempts to ask a question about the connection between the current government and entrepreneur Babis Vovos, who was arrested for unpaid taxes in 2012. George Tragas, the host, interrupts him by muting his microphone! This behavior undoubtedly violates and ignores the rules of journalistic ethics. Offended by this maneuver, Syriza members left the talk show.

Despite all these propaganda-manipulation-censorship challenges, there is still optimism among Syriza members. And why shouldn't there be? Syriza appears to be gaining momentum with less a few days before Sunday's snap election, pulling further ahead of the co-ruling conservatives in many opinion polls. Let's remember the closed red box in the room full of open boxes. On January 25th, the Greek people are expected to decide if they are going to open the red box to see what's inside. Will they open it?