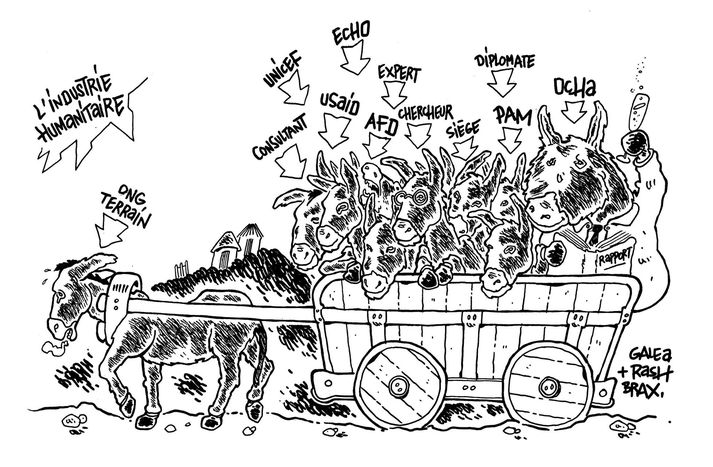 The CAR is hanging by a thread and only holding on thanks to the work of humanitarian organisations. We interviewed many different central figures at non-governmental organisations, such as Médecins sans Frontières (Doctors without Borders), Oxfam, Action against Hunger and the United Nations World Food Programme (WFP), in order to get an explanation of the actions they are taking on the ground.

Following its independence from France in 1960, the Central African Republic (CAR) has been a politically unstable country which, on average, has witnessed a coup d’état every 10 years. It’s currently experiencing its worst ever humanitarian crisis and suffering unbearable levels of violence. The violence broke out in 2013 when the Séléka coalition seized power, committing extremely serious human rights abuses on the civilian population. That’s when the first armed conflicts emerged with the groups referred to as Anti-Balaka, for the most part Christians and animists who blamed the Muslim community for the Séléka’s activities. And then the massacres began on both sides. A quarter of the population has been forced to migrate, while the death toll bleeds into the thousands and the interminable violence has become a civil war with ethno-religious overtones.

A 'practically non-existent' involvement from the international community 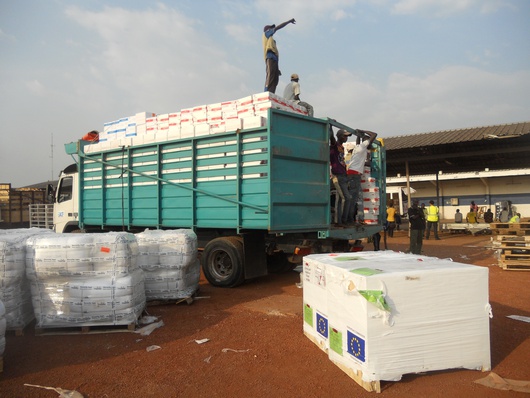 8,500 international troops have been deployed in the Central African Republic, an amount which has not been enough to restore peace and security to the country. Oxfam’s Emma Fan­ning thinks the main problem is that there isn’t enough diplomatic compromise and coordination is too weak between the different missions taking place in the country. According to Emma, there’s “diplomatic representation from France and the African Union, but little else, which means that the international community doesn’t get an analysis of the situation and doesn’t know how to act.” Action against Hunger’s Lucile Grosjean subscribes to this opinion and points out that the coordination between the various NGOs, diplomatic missions and armed forces has been growing little by little, but work still needs to be done to strengthen the ties. The lack of political compromise has also been criticised by Médecins sans Frontières (MSF), whose president made a press release in which he pointed the finger directly at the United Nations Security Council and the African Union for their “lack of mobilisation to address the violence that is tearing apart the Central African Republic.”

The United Nations Refugee Agency, UNHCR, reports that the crisis in the CAR is one of the most poorly funded humanitarian emergencies. Lucile describes how the NGOs’ work in the area has taken the form of damage limitation. The Muslim community used to constitute the main body of wholesalers, importers and exporters of food, but the domestic food market collapsed following their mass exodus from the capital, Bangui. Lucile explains how “the small markets have almost completely disappeared and the country has sunk into a real war economy.” The World Food Programme (WFP) estimates that it will take approximately 18 months to rebuild the domestic food market; eighteen months in which humanitarian aid will be needed, which means an enormous effort for the various non-governmental organisations. In regards to the country’s agriculture, the FAO plans to distribute seeds to 76,000 families and food rations to the same beneficiaries. The representative for Action against Hunger criticised the rush to distribute the seeds in time for the planting season, given that “there hasn’t been any technical support or monitoring necessary to make sure that these are planted and not eaten.” 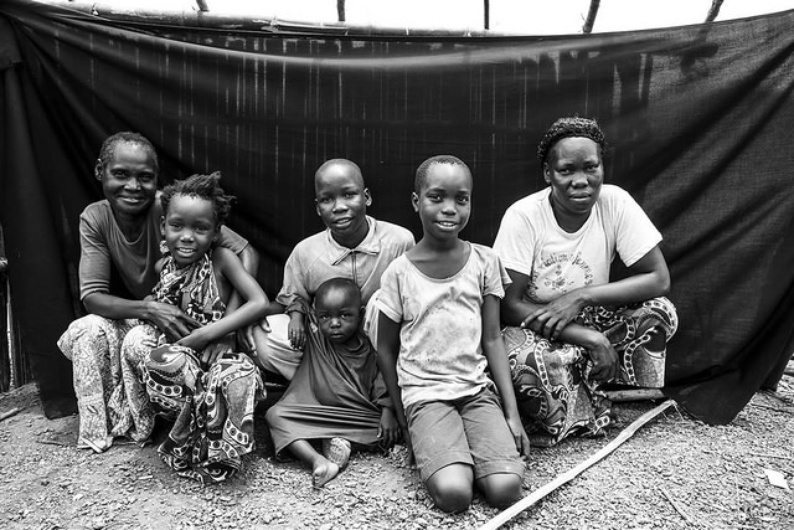 Furthermore, a quarter of the population has been forced to migrate or take refuge in neighbouring countries: 935,000 people have had to leave their homes, as reported by the UNHCR early this year. The unpredictability of the outbreaks of violence has left many families scared to return to their houses, preferring to remain in the refugee camps. Some observers on the ground note that the threatening regionalisation of conflict is adding to the country’s own drama. Emma Fanning tells us how the increased concentration of people and the coexistence between refugees and the local community is creating new tensions. For example, part of the displaced community in Chad has emigrated with its herds, which are sharing the local goats’ pastures. This situation has given rise to new frictions. Emma asserts strongly that “if there isn’t enough attention given to this, it’s highly likely that the instability will spread to neighbouring countries, which will make the stabilisation of the CAR even more difficult.”

The work of humanitarian personnel – just like that of journalists in the country – is carried out in an extremely dangerous environment. Three volunteers for Médecines sans Frontières (MSF) died last April in an attack on the medical centre where they were working. A week after the incident, Mathieu Fortoul, MSF’s Communications Advisor in the Central African Republic, explained to us that “the country is experiencing instability and changes of huge proportions,” which forces them to change their staff “every two or three months.” Mathieu emphasised that organisations have to face up to the fact that the CAR “is a country which isn’t talked about very much.” “The French press gave it a lot of coverage in December, of course, and currently as well in light of the murder of [French photojournalist] Camille Lepage and the French military intervention, but the other media don’t speak much about it. The conflict doesn’t get much media coverage,” complained the Communications Advisor at MSF, who added that the local media have hardly spoken about the murder of Camille Lepage, whom he knew personally.

Mathieu observes that the country has opposing groups with extremely different interests and no coordination whatsoever. This means that “even if our volunteers do get hold of a mediator to assure them that the area is safe, they don’t know who will be further up the road, or who’ll be controlling the armed men”. Oxfam’s Emma Fanning shares the same idea and explains that the different armed groups have no command structure, which makes it impossible to negotiate safe passage to certain areas for their workers.

Despite putting their lives at risk, Médecines sans Frontières count on the support of 2,240 workers, both native and international, in 16 different locations across the country. MSF’s Communications Advisor points out: “Every day we carry out about 1,000 medical consultations and deliver ten babies. Despite the lack of security, it’s still possible to work, and this is the proof.” MSF’s budget for the Central African Republic is 40 million euros, a figure which is even greater than the country’s Ministry of Health budget. Mathieu wants to make it clear that he’s never seen a response like this. “As of today, we’re working to the limit, but we’ve not come here to replace the function of the State; we’re on an urgent medical mission." 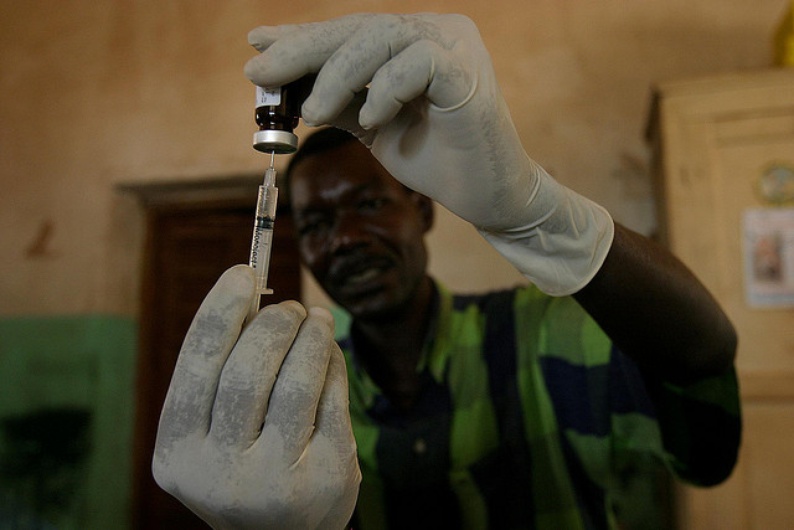 By contrast, Lucile Grosjean emphasises the gravity of the situation regarding food, which is the field of work concerning her organisation. Action against Hunger treated 1,000 children with severe malnutrition in January, 1,200 in February, and the number rose to 1,600 in March. In light of these figures, Lucile concludes that “malnutrition in the CAR is a very serious problem; the people don’t have any food and have been surviving off leaves for too long.” The hole opening up in the local economy, the agriculture sector and the state structure has grown so large that we don’t know how long it will take to recover.

Are we doing all we can?

UN Secretary General Ban Ki Moon gave a speech in Bangui last April in which he lamented the fact that “the international community failed the people of Rwanda 20 years ago” and he warned that “we are at risk of not doing enough for the people of the Central African Republic today.” That same month, the United Nations Security Council approved the deployment of a force of 12,000 Blue Berets to the CAR, coming into effect next September. All in all, Oxfam’s Emma Fanning emphasised that it’s crucial that there’s an immediate improvement to the coordination between the various missions sent to the country. The CAR currently counts on the French-led mission, known as Opération Sangaris, the African Union mission MISCA and the European Union operation, EUFOR.

Emma is critical of the fact that these missions have extremely poor equipment and communications. Oxfam’s Protection Manager states that MISCA doesn’t have the necessary resources at its disposal to protect the population, because it doesn’t boast an air force and has awful radio communications, sometimes being “worse equipped than the humanitarian aid organisations.” Emma’s main concern is that the United Nations Security Council will uphold its decision to deploy Blue Berets without making sure that the tools arrive, that they work in cooperation with the different forces and that they receive the necessary funding. Emma concludes in convincing fashion: “This needs to be done now, not in September, or else it’ll already be too late.”

On 24 July this year, the armed groups Séléka and Anti-Balaka agreed to a ceasefire. As we wait to see whether the violence in the country has stopped for good, the humanitarian emergency continues to get worse. The personnel of the non-governmental organisations in the area – the unsung heroes who come to people’s aid and save lives – demand more engagement, funding and help from the international community. The Central African Republic needs more.

*THE INTERVIEWS WITH WFP, OXFAM, Ac­tion AGAINST HUNGER AND MSF TOOK PLACE in APRIL AND MAY 2014. THE UNITED NATIONS WORLD FOOD PROJECT DIDN’T RESPOND TO ALL OF OUR QUESTIONS, AS IT COULDN’T TAKE A POLITICAL STANCE.