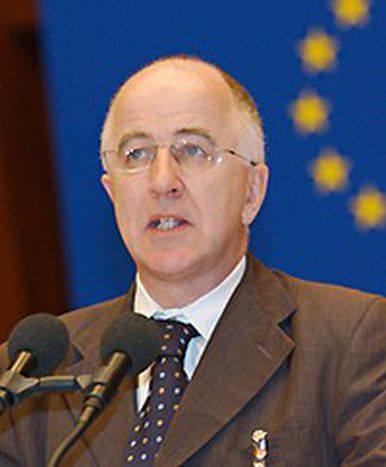 "The British can’t have an adult discussion on Europe"

Why is debate in the UK over Europe so limited?

The difficulty in Britain is that we do not have an agreed national politics on Europe. We spend 80% of our European discussion-time not discussing how we should try to encourage reform in Europe. We are locked into a theological divide about for or against Europe, which is one of the tragedies of British politics because [it means] we can’t have an adult discussion on Europe, we always have this adversarial knock-about.

What do you mean by an adult discussion?

Well, one based on facts. We need to clear away all the Harry Potter myths that Brussels is going to decide the tax, foreign or defence policy of Britain, all of which are untrue. [Instead] we need to ask ourselves how do we make the single market work; how do we get the balance right between ‘economic Europe’ [profitability] and ‘social Europe’ [the welfare state]; how many rules do we want Europe to impose on other countries in our name and how many rules are we prepared to accept ourselves, imposed, if you like, on us in the name of the rest of Europe. But we just don’t have this kind of discussion.

Do you not think that having a referendum would precipitate this debate, as it has done in France?

I don’t think so, because what one saw very much in France was a [debate on] a ‘Da Vinci Code’ Europe of myths. You had to combat people saying that Brussels would decide France’s abortion laws, which is just not true and yet there were whole articles in newspapers devoted to this issue. It’s unbelievable! The country of Descartes has lost all connection with reason. So no, I think that the notion that in a four week referendum campaign you can have the debate required on Europe is mistaken. Discussions need to take place in a mature way on a regular basis, in the same way that we are constantly debating our international defence policy in Nato or our trade policy in the WTO, without getting into a debate over whether or not we should remain a member.

Will the British EU presidency help to overcome the current political crisis?

I think it will be a healing presidency. There is a triple crisis in Europe: a political one, an economic one and a leadership one. And the three are interlinked so it’s very difficult to find a political solution as to how Europe should be governed when Europe is not growing economically. We have to wait for elections in Germany this year, Italy next year and France in 2007 to see if a new leadership in Europe can emerge and connect better, because the disconnection is not just between the so-called European elite and the people, but between the different leaders of Europe with each other and with the people they nominate to the Commission.

What are the objectives of the British EU presidency?

I hope that the British presidency will encourage reflection on Europe and be very firm in saying that Europe needs economic reform and job creation policies. I also think the presidency should invite Europe to lift itself up from its own navel and see itself as an important part of good in the world. Climate change, aid to Africa, trying to sort out problems like Iran, Sudan, the Middle East … Europe has got political questions to answer and economic problems to solve, but it still remains a very important global player and I hope that Britain, as a confident country on the international stage, will seek gently to bring together the 24 other countries – it’s not a question of Britain imposing its will – to encourage Europe to see itself as this global player.

You say the UK needs to urge economic reform in the EU. Do you mean that the other countries should follow the British economic model?

No. The notion that there’s one single European model which will work for all 24 other countries is just absurd, I get so fed up with that kind of nonsense. We should look at what it is that makes Europe work and just apply it, [for example] there are bits of Britain that don’t work very well so we need to copy other parts of Europe.

What hope is there for this kind of integration, bearing in mind the massive stumbling block of the rebate and icy relations with France?

Well, Italy is threatening to veto the budget unless it agrees with Italy’s demands, Spain is very unhappy, Germany wants to lower its contribution, so only in London is there this manic obsession with France and the fact that French politicians have raised the rebate. I mean it is part of the debate, along with all the expenditure and revenue systems that the EU has and we should be discussing all if them. I doubted very much that we would get an agreement on the budget. But then never before in European history have we had the European budget done and dusted 18 months before it has to be applied. It would be nice, but I don’t know anyone in the business who for a moment thought that it was realistically going to happen. So this great screaming match about the rebate is rather artificial.

Do you think that Euroscepticism is to blame for the British fixation on the rebate?

What does this mean, ‘Eurosceptic’? I’m sorry, but the French and the Dutch have just had votes that have been a pretty decisive victory for Euroscepticism. Equally, the British public have just re-elected a massive number of MPs whose parties support pro-European policies. The Tories fought their third consecutive election with a strong Eurosceptic profile and what’s happened? For the third time running they have under 200 MPs! One shouldn’t confuse a dislike of Brussels or a sense of irritation with out and out rejection of the European Union, because if anti-European politics is where the British public actually wanted to be, then I’m afraid [the Eurosceptic] Mr Kilroy-Silk would now be an MP and [Conservative] John Redwood would now be deciding the politics of the British government on Europe.