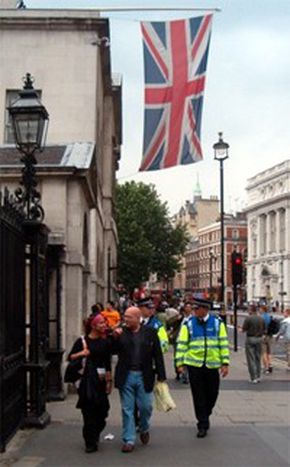 The British Bulldog is barking again

The London bombings have given the United Kingdom a new sense of self-identity. Good news for the Brits, maybe, but not so much for Europe.

Until recently, the United Kingdom was suffering from an identity crisis. The former Empire-builder was simply unable to locate its defining characteristics in the world of today. Yet the two recent series of bombings in London have reinvigorated the social cohesion that had been so lacking. The attacks have enforced a new sense of patriotism and, less attractively, xenophobia.

The British have found a new common enemy in the Muslim extremists. What used to be distant organisations are now actual people, living, breathing and attacking on home soil. The country feels a genuine threat and its response has been to rally around the flag. The infamous British tabloids have helped to reinforce this instinctive reaction with headlines in the Daily Mail such as “City of Fear” and “UK under attack”.

National pride is now proliferating across country. The Union Jack seems omnipresent, waving everywhere from Buckingham palace to village pubs. People readily admit that they are very, if not extremely, proud of the response of their nation to the bombings. The Prime Minister’s popularity has risen. Jessica Jameson from London summarises the popular feeling nicely in her comment on the BBC News website: “We should all be proud, that under such tragic circumstances the country can unite and fight against terror.”

But renewed national pride has its darker side: a frightening increase in xenophobia. People are becoming increasingly wary of ‘outsiders’, with television and radio reports showing that the UK is becoming increasingly suspicious of its substantial Asian population. However, this empowered xenophobe attitude will not only be directed towards people from other continents.

Many Brits already viewed their own country as very much distinct from the rest of Europe. The London bombings will make them even more hostile towards overseas-based political and economic organisations that influence its policies, most notably the European Union. Increased Euroscepticism will mean that the government, currently holding the EU Presidency, is going to have to narrow down its reform minded agenda for Europe to areas that the British people do seem to support, namely security.

It is sad but true: the average Brit associates Europe with ‘loss’ - loss of identity, loss of culture and, especially, loss of power. It is therefore highly improbable that following these terrorist attacks the barking British Bulldog will now try and find comfort with the European terrier.