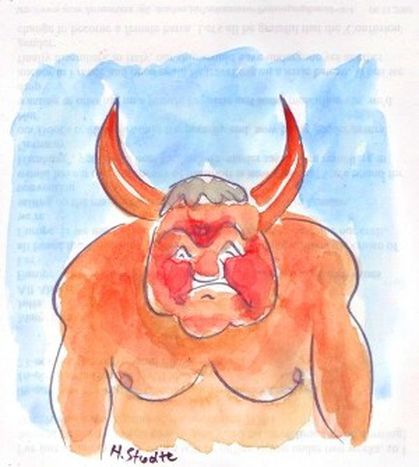 In most European languages, wearing horns implies some form of infidelity to one’s girlfriend (or, since the advent of feminism, boyfriend). In Italian one mettere le corna, in French mets des cornes, and in and around Barcelona one would be posar les banyes – even those faithful Germans have much the same expression: one would be ein gehörnter ehemann, a horned husband.

In Italian, however, the horn has more than just a sexual connotation. Cornuto e mazziato, horned and clubbed [or beaten], is an expression used to describe politicians betrayed by their allies. And fare la corna, to make horns with ones fingers, is a gesture to ward off evil or misfortune. Apparently, for Italians, horns are multi-purpose.

In Germany and England there are also more connotations than the simply sexual. We both Ster bei den Hörnern packen, take the bull by the horns. The Dutch, however, could be considered somewhat more timid. Leaving the bull to one side, they de koe bij de horens vatten; they opt for the cow.