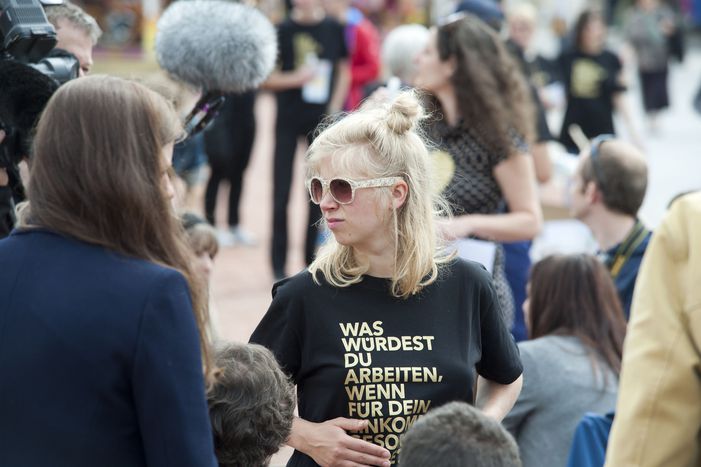 The Swiss have clearly rejected the universal basic income in a referendum: around 77 percent opposed it while 23 percent voted for the initiative. Some commentators are relieved, saying that voters made the responsible choice. Others believe capitalism can't continue without this form of basic social safety net.

Luckily the advocates of the basic income didn't get their way, Le Temps writes in relief: "Of course the social safety net needs to be reformed, but not in this way. And not with a measure whose costs no one can assess. But one central question remains from the debate this spring: if work pays less and less, it is not ridiculous to ask what value citizens have in society. The parties are supposed to act as idea generators, but much to the despair of the younger generations they don't have much new to offer here. In fact Generation Y is more in favour of an unconditional basic income than the elder generations, and with good reason too: it's the first that will earn less than its parents. The millennials don't want the dawn of a new utopia, they want concrete proposals." (04/06/2016)

Bulgarians would have said no too - 24 Chase, Bulgaria

The Bulgarians would also reject a universal basic income because they have just as great a sense of responsibility as the Swiss, 24 Chasa posits: "The Swiss have rejected a life-long unconditional basic income because they fear it would harm their economy. Four years ago they voted against extending their annual holidays from four to six weeks for the same reason. Responsible citizens can be asked to vote on any issue and they will always take the right decision. So why are Bulgarian politicians so afraid of referendums? If they asked the Bulgarians today whether every person should receive 2,450 dollars per month (once it became clear where the money would come from), the result would be very similar to that in Switzerland. Because regardless of whether they're Swiss or Bulgarian, the voters know best what can work and what can't." (06/06/2016)

Not even the World Record for the largest ever poster in favour of the basic income was enough to clinch victory.

The daily Sydsvenskan also sees little need for an unconditional basic income: "Some people think the stigma bound up with receiving benefits will disappear with the basic income, but that's by no means certain. ... You could say that a basic income already exists in Sweden and other welfare states, in the form of social benefits. However it has little do do with the romantic dreams [of basic income proponents]. Living on welfare for a long period of time is hardly enviable; often it's a very limited and even impoverished existence. The term basic income could also become a euphemism to coldly write off everyone who is not productive enough, who is supposedly no good to society. Most people need the structure that work provides and appreciate the feeling of being needed and participating. Life is not just about work, but a life without work can be very poor indeed." (06/06/2016)

Work and income must be decoupled - Berliner Zeitung, Germany

The decoupling of work and income as foreseen with the universal basic income will sooner or later be necessary, Berliner Zeitung explains: "Politicians still assume that this disparity [between rationalisation, low wages, reduced demand and a backlog of investment-seeking capital] can be solved with 'structural reforms' and constant growth that generates well-paid jobs. But what if that doesn't work? Or if it works economically but leads to an environmental disaster? ... The debate about decoupling work and income will not go away because it asks the right question: how sensible is a principle that a) constantly raises the pressure on employees, b) forces millions of people to work although the economy doesn't even need them, while c) many socially important jobs are extremely poorly paid or won't even be done because they don't yield returns?" (03/06/2016)

The conservative daily Lidovè noviny is surprised at how popular the idea of a basic income is in the West: "The communist utopia of everyone receiving support according to their abilities and their needs is appealing. It is not the communists who are trying to peddle it now but rational, educated people who fear a certain trend: the costs of social benefits, contributions and services are taking up a growing proportion of the welfare state's budget. Wouldn't it be better to pay people a lump sum each month to cover their basic costs? … The fact that the idea is being discussed in the West confirms Marx's prediction of 170 years ago that communism would win out in the most highly developed countries. Communism's triumph in backwards Russia was a detour in history. Now Marx could write: the spectre of communism is haunting the rich welfare states of the West." (06/06/2016)