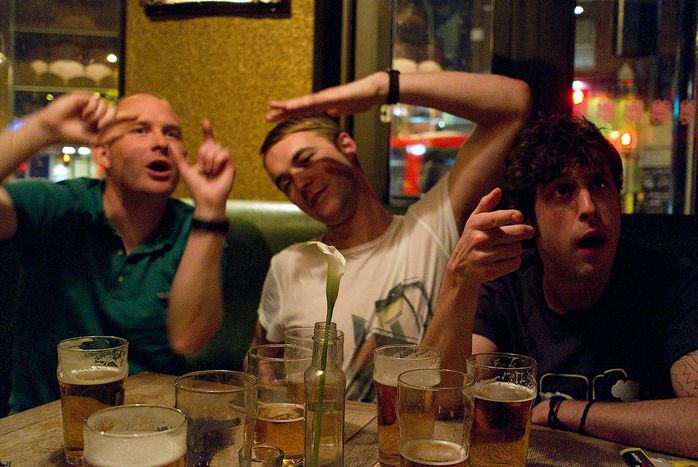 I don't often go back to home, to a typical Swabian town that gradually distanced itself from me.‬ ‪Or maybe it was the other way around. ‬ ‪I confess that I now live in Brussels, where I am a tiny cog in the machine where European guidelines and regulations are made. ‬ ‪And I am a man of principles.‬ ‪As always

Despite the smoking ban, it smells like pub, warm food and stale air.‬ ‪Stale like the leftover beer at the bottom of my glass.‬ 'Hey you,' someone calls from the table next to ours just as we get up to pay the bill.‬ ‪I turn around.‬ ‪The speaker gets up and walks in front of me, blocking my path. ‬ ‪His beer breath wafts into my face.‬ ‘You're from the EU, aren't you?’ he says.‬ ‪I assume that we're roughly the same age, and instead of speaking in formal dialect, he uses the Swabian vernacular, just like everyone else here.‬ ‪And in the same way that I used to. ‬ ‪I nod reluctantly.

EU parliament's not that bad...

‪Years ago it was still cool to work for the European parliament. Today, I am more careful about admitting that I do. ‘In your EU,’ he says, pressing his pointer finger against my chest to add emphasis,‬ ‘In your Europe, we Germans are only the providers for the Greeks and everyone else.’‬ ‪His buddies at the next table eagerly nod in agreement, raising their glasses of wheat beer to toast the speaker.‬ ‪’What are you doing to combat the crisis?‬ ‪Nothing, right?’

Read 'Youtube ‘message from Portugal to the world’ as Merkel makes Portugal visit' on cafebabel.com

It’s a bold theory, in my eyes.‬ ‪After all, the European parliament has a lot to show for: regulation of the financial markets, regulation of high frequency and derivative trading, more savings protections, stricter equity laws, etc.‬ ‪It’s impressive for a parliament whose citizens hardly take notice.‬ ‘Right.‬ ‪Nothing,’ I hear myself say in spite of myself.‬ ‪My opponent is temporarily taken aback. ‬ ‪He obviously wasn't expecting such a response.‬ ‪ ‘Well, at least you're honest,’ he replies, contentedly tipping his baseball cap and generously clearing the way for me. ‬ ‪Now I could escape without being pestered.‬ ‪But I don't care about that anymore. ‘Because the euro crisis isn’t the EU’s responsibility.’ ‘Why,’ he draws out in a surprised tone. ‬ ‘That doesn't make any sense.’

‪He's right.‬ ‪However, I hesitate to initially respond. It is my holiday, after all, and I'm not in the mood for lengthy discussions.‬ ‪But then my frustration rips open my mouth, allowing to let bubble out what I have kept dammed up for far too long - such as how the governments of the EU member states, especially the German government, misled the European parliament and with it the entire EU; how they simply agree on bi-national contracts on bailouts, each with each other, as if the partners were New Guinea, Haiti, or Mali instead of Germany, Poland or France; and how the governments thereby sidelined the European parliament and revoke the powers of the European court of justice. That's what the media calls backroom politics, which is, in actuality, the de-democratisation of the EU: a bona fide coup.‬

‪‪Even my opponent seems now to have become absorbed and thoughtful, readjusting his cap. ‬His prior harshness dissolves from his face and is replaced by an expression of concern. ‬ ‪Just like the rest of us, he watched the television unfold as confused members of the bundestag (German parliament) had to vote on bailouts that not even they had yet fully understood. Likewise, he's seen the pictures of the people on the streets of Europe, and of governmental leaders with their hands idling in their pockets whose countries had taken a financial blow, and who have had to grudgingly submit to (German chancellor Angela) Merkel's doctrine of strict austerity measures.‬ ‪These are countries that now have to conserve and cut back to the point of oblivion, just as Germany once did at the end of the Weimar Republic. ‬

‪He's seen the pictures and sensed that something is wrong with the EU, which has instinctively turned him off to it.‬ ‪We all feel that something is wrong, and we all follow our instincts.‬ ‪Apparently, we Europeans have developed an unerring sense of when our democracy has taken a blow to the gut. ‘Merkel says there is no alternative,’ I conclude, shrugging my shoulders.‬ ‪Just recently the chancellor presented her proposals for a reform of the EU. Much of it actually sounds like an improvement. ‬

‪But it isn't a mutually agreed upon one. Again, it's a German Europe; it is one that is imposed on the other members, with few options.‬ ‪Undoubtedly, Merkel believes that there are no other alternatives to her new Europe. ‬My Europe, however, can never be without alternatives.‬ ‪My Europe is democratic.‬ ‪Just like the Europe of the man with the baseball cap.‬ ‪’If I were you, I wouldn't let them get away with it,’ he says.‬ ‪I nod.‬ ‘There's more of a Greek in you than you probably know,’ I reply in the Swabian dialect.‬ ‪But I stop short, realizing that my Swabian is a little rusty.‬ ‪I grin.‬ ‪He grins back.‬ ‪I'm back home.‬