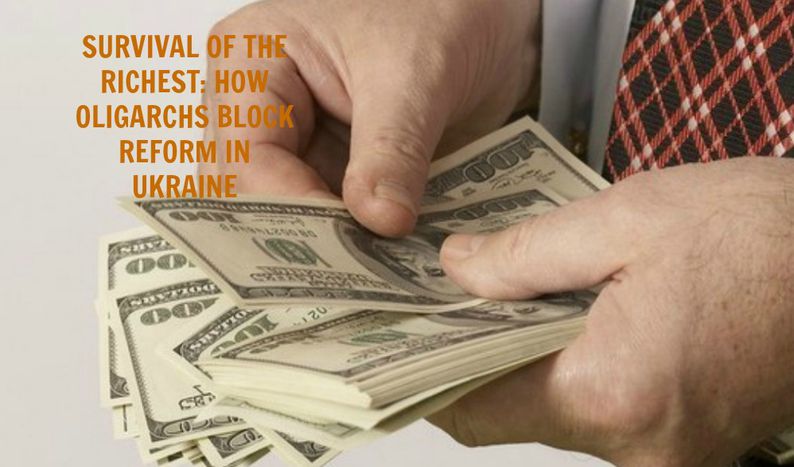 SURVIVAL OF THE RICHEST: HOW OLIGARCHS BLOCK REFORM IN UKRAINE

Since the establishment of Ukrainian independence, the issue of oligarchy and corruption has scripted the agendas of major political and civic actors in Ukraine. These incursions are considered to be the main barriers for achieving democratic change in Ukraine.

Since the establishment of Ukrainian independence, the issue of oligarchy and corruption has scripted the agendas of major political and civic actors in Ukraine. These incursions are considered to be the main barriers for achieving democratic change in Ukraine. These are also prominent concerns for actors involved with international development and democracy-building assistance. Notably, Ukraine is a major aid-receiving European country. This reserch presents the struggle of Ukraine to fight corruption and oligarchy:

The resignation of Ukrainian PM Arseniy Yatsenyuk and the elevation of Volodymyr Groisman demonstrates the failure of Kyiv’s reform process, and offers Europe an opportunity to push for deeper changes. And while Ukraine suffers from many types of corruption, it is the penetration of its politics by the super-rich oligarchy that forms the main obstacle to reform.

Wealth is concentrated in few hands in Ukraine. Before the Euromaidan protests of 2013 the assets of Ukraine’s 50 richest individuals made up over 45 percent of GDP, almost five times as much as in the US. Politics in Ukraine is extraordinarily expensive, with campaign expenditures running at hundreds of millions of dollars. And oligarchical media ownership further strengthens the hold of the wealthy over Ukraine’s democracy.

The author highlights two key areas, the judiciary and Ukraine’s state-owned enterprises, where the nascent process of ‘de-oligarchisation’ has failed to take hold. Control over the courts means that there have been no high-profile leading figures from the Yanukovych era brought to trial. And Ukraine’s state-owned enterprises siphon off government funds to the pockets of oligarchs, providing further funds for them to control events in Kyiv.

The EU remains Ukraine’s only plausible ally and, as such, has the potential to wield a huge amount of influence over the reform process. Wilson highlights two main areas that European policy makers should focus on, both of which focus on decoupling the oligarchs from the political system, rather than attacking the oligarchy itself.

The first step should be to strengthen the pressure applied on the Ukrainian authorities from below, by local civil society. Engagement could take the form of encouraging the participation of Ukrainian NGOs in EU-Ukrainian government dialogue.

The EU and its member states should also pressure Ukraine’s leaders, who are perpetuating and in some cases directly benefiting from some of the worst practices of the Yanukovych regime. Abuses by oligarchs’ placemen in the state bureaucracy and others must be investigated.