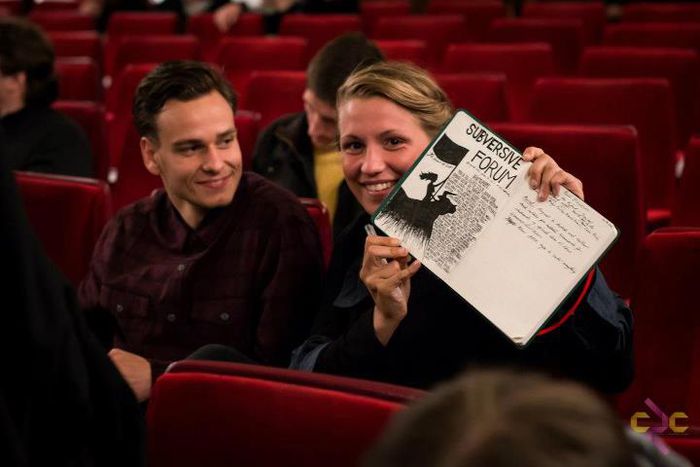 ‘Another Balkans is possible,’ was one of the slogans at the Zagreb subversive festival held in May 2012. From protesting the rise in tuition fees to mass occupations against the rampant urbanisation and real-estate speculation in the capital city, Croatians have found a common point with EU citizens - revolt

‘Defending public goods - be it education, energy policy or public spaces - is a hot debate topic right now throughout Europe,’ says Srecko Horvat, a founder of the subversive festival, which is both a debate forum and film festival that has been held annually in Zagreb since 2008. ‘A few years ago these topics were taboo in Croatia, following a period in which neoliberalism was still an official figure of dogma.’ For its fifth edition, the subversive festival has become the only platform in the region dedicated to new social and political movements. This year’s guest list included Polish sociologist Zygmunt Bauman, the Italian philosopher Antonio Negri and British journalist Tariq Ali, as well as frequent guests such as the Slovenian philosopher Slavoj Zizek who participate every year. 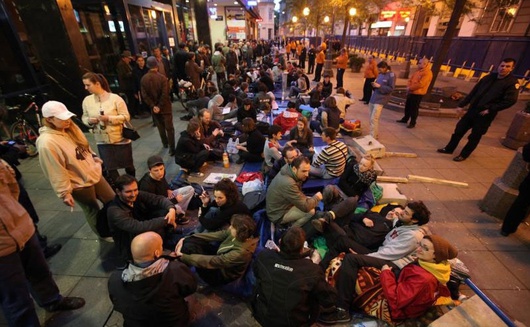 My interview with Srecko at Kino Europa, a former cinema converted into a cultural centre and alternative bar in Zagreb’s clean and elegant city centre, is interrupted more than once by the comings and goings of pensioners begging at each table. ‘There you have it, Croatia today!’ remarks Srecko. From his point of view, the student protests against higher university tuition and real-estate speculation, which have actually had an unexpected success in terms of visibility and participation, all share a common goal: defending public goods for the new generation. Certain media sources have coined this phenomenon as ‘yugonostalgia’, which the conservatives use to accuse Croatians of hostility towards the new nation. Yet Srecko points out that this movement is not about nostalgia for Yugoslavia’s socialist past, but about focusing on the present in the context of global dynamics.

The student protests were sparked by the university price increase which was approved by the government of the centre-right Croatian democratic union (HDZ). On an index that measures the relationship between tuition fees and purchasing power, Croatia is ranked 29 among 40 European countries, with a cost ranging between 550 and 1, 250 euros per year, depending on the faculty. The first occupation (‘blokada’) took place in the spring of 2009, the first major student strike since 1971, followed by another one in autumn of the same year.

The philosophy building, the epicenter of all protests, is located in ‘New Zagreb’, a neighbourhood which was built in socialist times. Crossing through the station’s underpass, which divides the two souls of the Croatian capital, the grey immediately turns into the pastel colours of the university district, with anti-university protest slogans plastered on the walls. At the college bar, Adam Berišić recounts the highlights of the 'blokada': ‘Drawing from our experience with direct democracy, a full assembly would meet every day to debate,’ he says. Academic solidarity (‘Akademska solidarnost’) was born in 2011, when the occupy movement was going strong. ‘It was the first independent union in Croatia which assembled university personnel, and which worked off the principle of direct democracy. There is no president, and no rotating representation. There is only a rotating forum claiming, among other things, a system of free education for all,’ adds IzvorRukavina, an active member.

The ‘blokada’ is not in any way limited to the fight for free public education. It has spread to include other causes supported by the broader population, becoming an instrument of protest in the process against the politics of privatisation initiated by previous governments. As I walk through Flower Square (‘Cvjetni trg’), the consequences of this policy quickly appear in the form of a brand new commercial and residential centre which has recently sprung up in a place so dear to Zagreb inhabitants. Behind its arrogant, glass-panelled façade, the complex houses 39 apartments, a parking area for 400 cars, and a range of shops and restaurants. It sticks out like a sore thumb in a historical area sprinkled with flower stands.

Tomislav Domes from the initiative right to the city (‘Pravo na grad’) recalls the most noteworthy advancements in the battle against the devastation of Flower Square, the first and most important of occupations undertaken by people. ‘We started the campaign so as to spread awareness of the project,’ he explains. ‘We try to delay the works, be it through legal measures, disruptions or more practical actions, and have seen a great turnout. The final phase began in spring 2011 with the mobilisation against the proposed redevelopment of Varšavska ulica, the side street at Flower Square which contains an entrance ramp leading to the underground garage.’ Despite strenuous resistance, the bulldozers couldn’t be stopped. However, the campaign for Varšavska can be seen as a success because it helped change the city’s master plan. ‘Through public awareness, it has opened doors for other ongoing campaigns that are fighting property speculation in the Dalmatian and Istrian coasts’, concludes Domes. 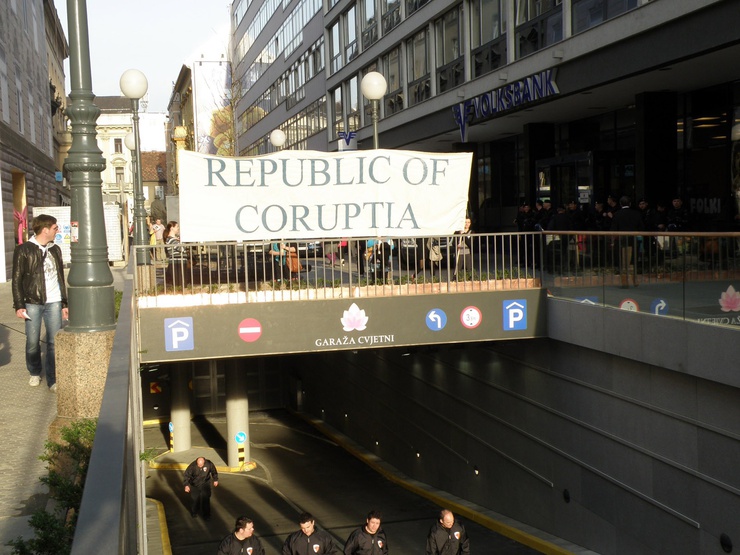 On 15 October 2011, various movements made up of students and other anonymous people gathered for an international protest against the selling off of social rights, the attack on public services and the austerity policies promoted in the crisis. Zagreb’s city centre was teeming with thousands of citizens (10, 000 according to organisers, and 3 - 5, 000 according to media reports); it was a greater participation than in any other city in a region where protesters can usually be counted in the hundreds. This event illustrates the uniqueness of Croatia.

Croatian protestors have successfully put social issues at the heart of public debate. Carried out by the voices of the younger rebellious generation, denouncing the crisis can bring visibility to the increasingly obvious social and economic disparities, the decrease in industrial production (it fell from 9.4% in first quarter of 2012) and increasing poverty (which affects approximately 17% of the population). Thanks to these movements, one can finally dare to believe that ‘another Balkans is possible’.