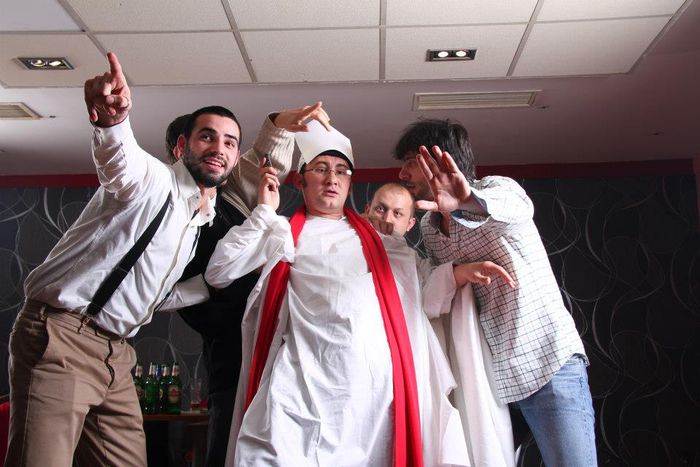 Stand-up comedy in bosnia and herzegovina

Just these days, Anti-Cultural Theatre (ACT) “Alija Sirotanović” celebrated 10 years of existence on Bosnian and Herzegovinian comedy scene. Even though they have a decade of experience, they still consider themselves as amateurs whose work has been emphasized with satirically- comical approach to basic problems within society through numerous acts and performances.

Just these days, Anti-Cultural Theatre (ACT) “Alija Sirotanović” celebrated 10 years of existence on Bosnian and Herzegovinian comedy scene. Even though they have a decade of experience, they still consider themselves as amateurs whose work has been emphasized with satirically- comical approach to basic problems within society through numerous acts and performances. Members of ACT are Dušan Jokić, Mirko Komljenović Mirkan, and Igor Kalaba, who are at the same time authors of sitcom “Sirotanovići” which will soon be on-screen within region. The reason why I have decided to write about them is because they are perfect illustration of whole Bosnian and Herzegovinian scene, with all advantages and disadvantages.

Through ten years, I haven’t managed to attend their performance; therefore this interview was my first touch with well-known ACT.  During pleasant evening conversation in cult café, Rose, members of the group are explaining- why Anti-Cultural Theatre, why Alija Sirotanovića, but many other things as well.

“Why are we known as Anti-Cultural Theater? Because we’re always surrounded by quasi-culture which has been accepted as culture; and everything nowadays is called culture. We do not want to be part of that. As long as quasi-culture is considered as culture, we will be anti-cultural. Also we are Sirotanovići 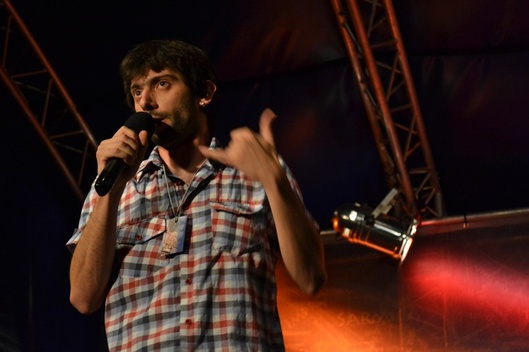 because we are from working class, and Alija Sirotanović (mine worker and icon of Yugoslavian labor) is symbol of hard work. We are not going to dig the mine, but we are going to work. Work is necessary to prosper.

Exactly through our efforts, we gained loyal audience which is following and attending our performances. We are trying to sen

d them a message; actually not to send a message, we have post office for that, but to point them at problems within society and to use their own heads. Because of that, our performances are categorized as socially-engaged art. We see ourselves as professors to society.”

Stream of thoughts was shortly interrupted by worker of brewery, bringing in barrels of beer, but we sincerely forgive him. Cheerful night is still going on, and story of purpose of ACT is only at the beginning. 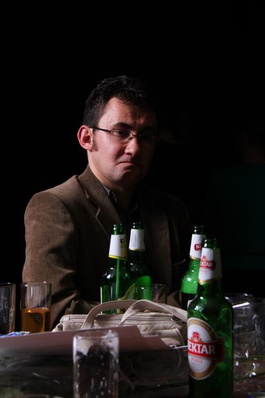 “Our performances are not toilet humor which can be watched and laughed at, without getting the deeper point. Our humor has historical and social background which needs to be understood in order to by funny. We dare to say that we have spirit of Monty Python but we cannot spread it since we do not have 60 million people like Great Britain. We have 4 million people with almost non-existing percent of population which reads and have certain knowledge of history, sociology, philosophy and similar fields.

But now, more than ever, society needs professors of esthetics and ethics. They are only concerned about subjects as democracy and human rights. Really people; aren’t you thought at home to behave in proper manner and to respect others, do we need to make big fuss about it? Obviously we do. But, nobody is telling you anything about beauty, art or morale. Nowadays, the most important is to make a blog or platform for some kids to see some penises, while knowledge doesn’t matter. Our society desperately needs humanistic approach."

When it comes to modern stand-up scene in Bosnia and Herzegovina, ACT is comparing it to political and security situation in Afghanistan. Modern scene doesn’t have “ideas and balls”, as essential components. Through time, dehumanization pushed humor, along with other arts, on margins of society. We have had “Top Lista Nadrealista” (most famous Yugoslavian comedy show) and today we have “Kursadžije” (relatively terrible comedy show) which are performing in Gelsenkirchen in front of Yugo-Swabian, or people that left Yugoslavia and now live across the Europe.

“In addition to modern scene, most of the people are entertained by “cock, pussy, shit and tit” as one performer defined shallow act. Vulgar things might be funny, but that is not the point. Humor has to have attitude. Nobody cares what the color of your vomit was or how dense your diarrhea was. Even if they are funny, they are not humorous, and it is not the same. Bad humor is like bad sex; you will laugh but you will feel emptiness, and that is why we are “trying to have good sex with our audience.”

As I already said, humor can be very serious thing. Through our performances, we are trying to tell people: You are behaving like lambs. If we could stop for a second and analyze situation in which we are at the moment, we could react. We are done with fear of disturbing someone. “Don’t say anything, it can be worse!”  We cannot bend anymore and it is time to stand up. You do not want to think, you are afraid to think! Realizing it is bad will not make things worse. It is bad because you thing it is not”

Somewhere around that point our interview has finished, but to complete picture about ACT, I will mention few additional details. Social engagement of ACT did not stay only at words, and they have many humanitarian actions and performances to confirm that. The most famous event is definitely exhibition of rejection letters “If I could work any less”. Exhibition is consisted of dozens of rejection letters which ACT received from “great masters of rejecting”. Some of them were simply too beautiful that it would be a shame if they were not shown to our audience. However, behind this naïve appearance, this performance is trying to use irony, sarcasm and satire to highlight huge problem of unemployment. This year, the exhibition took place for third time, every time with more and more beautiful rejection letters, that it even became regional trend.

“Since gynecologist sits in our city assembly, it is clear sign we are being fucked. We are lucky, for it might have been urologist”, ACT is concluding at the end of one great evening.   For us, it remains to raise glasses, toast to their 10th anniversary, and wish them lot of success in restoring hope in Bosnian and Herzegovinian humor scene, as well as hope in society, which more than anything deserves one dose of sincere and humanistic humor. 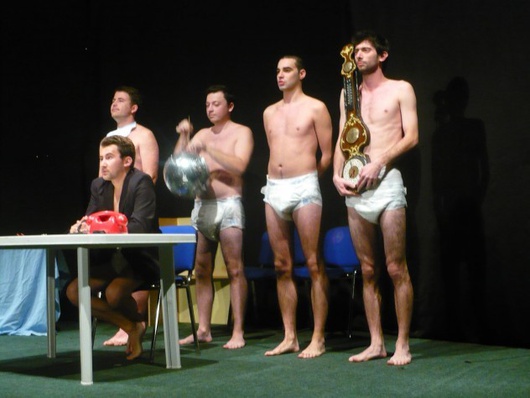