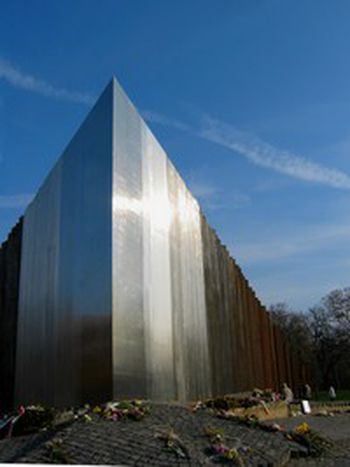 Fifty years after the 1956 revolution in Hungary, and Budapest's emblematic monuments betray a continuing uncertainty - what exactly did it all mean?

A series of long iron rectangles slowly form together into a solid white iron block. The design has a hint of Rodchenko - a maze of iron to lose oneself in. The i-ypszilon group wanted to arrange them as a crowd, a massed vortex that is the opposite of the orderly lines of Soviet troops. Instead, it appears a continuity of the Soviet aesthetic.

The creative group i-ypszilon, who built the newest monument to the Hungarian Revolution, are clear enough about its meaning. Others are not so sure. The protests against the government that coincided with the anniversary of the revolt saw right wing groups claiming to be the inheritors of the legacy.

‘For us, 1956 symbolises freedom. A shining moment in our history that was repressed for thirty years by János Kádár's dictatorship.’

As Communism started crashing down in 1989, the government tried to position themselves as the culmination of what was, after all, a reformist movement. Thirty years of silence under Kádár, and an uncertain legacy. The then director of the Institute for the History of the 1956 Hungarian Revolution wrote in reference to 1989 that he: ‘never expected that the very nature of the revolution would be questioned.’ This battle for the legacy of '56 is being waged through the monuments of Budapest.

Political revolutions have always tried to control the interpretation of the past. Hungary has seen quite a few in the 20th century. With each came a new version of history, new monuments.

Imre Nagy, the leader of the 1956 revolution, was reburied in Heroe's Square in 1989, after spending thirty years in an unmarked grave. Before the 1918 revolution, the square was ringed by the statues of fourteen kings. When revolution struck, a large statue of Marx embracing two workers replaced them. But come the 1919 counter-revolution, Marx was removed and the fourteen kings reappeared. Like chess pawns, they disappeared again with the communist ascent to power following the second world war. Nagy's reburial and the subsequent monuments honouring him unsurfaced a new version of the past.

After 1956, an uneasy complicity reigned between a population enjoying comparable good living standards and a government which brooked no political dissent. István Rév, professor of History and Political Science at Central European University, says: ‘to talk about Nagy would have been to acknowledge the illegitimate nature of the regime.’

Gábor Németh, writer and editor of the literary magazine Litera.hu, tells a joke. During the years of silence, a comedian would draw the balls for bingo, with all the normal chit-chat in his stand-up show. At a certain point he picks the number 56. He looks sheepish, and puts it straight back in the pot. The audience laughs nervously.

1989: Communism collapsed, and people began to talk. The museum House of Terror plays a leading role in uncovering the facts about the abductions and political repression of both the Soviet and Nazi regimes. Mária Schmidt, director, says: ‘we show the faces of those who are guilty.’

Enter the first room of the museum, and you hear classical music strains over two giant video banks on either side of the room. Images of Nazi terror flash across one. Facing Hitler, images of Stalin and Red Square flicker in lifeless parody. In the equivocation of both periods of horror, the Hungarian experience of complicity with the Kádár regime and communism is effaced.

For the right in Hungary, the principle lesson of 1956 is simple: even if they concede Nagy was a reformist, a man reluctant to end communism, his very execution shows democracy and communism are impossible bedfellows. 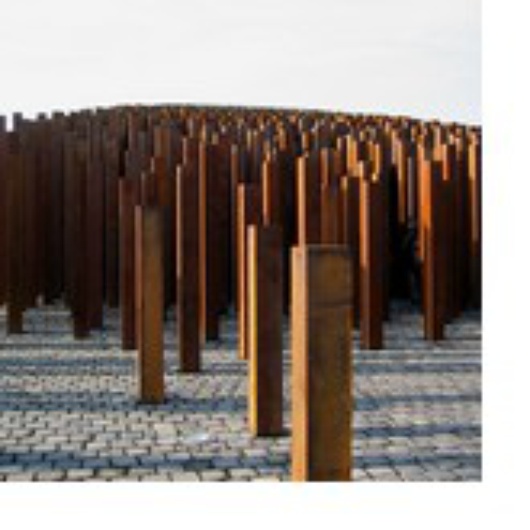 It’s a different legacy for the Socialists. The Kádár government had called the events counter-revolutionary. By 1989 it had become a ‘popular uprising,’ in the words of the ruling party. By reburying Nagy, they positioned themselves as the inheritors of 1956. Such a view is played out by many of the statues on show today.

In Hungary, statues are not just representations of history. They literally form part of it.

In 1956, protesters knocked down a statue of Stalin and used it as a barricade against Soviet tanks. All that was left of Stalin was his jackboots. Today, even those are gone. In their place stands the new commemorative statue.

The statue in the honour of 1956 is also a way of controlling the past, just like those old statues of Marx. Each version silences another. Kádár never says Nagy's name; the House of Terror effaces part of the Hungarian involvement in Communism; the new statue pretends Stalin's jackboots were never there.

‘The past is not dead. It's not even past,’ Faulkner writes. The question is: how do you live with it? Even today, Hungary has not found out how to live with the ghosts of 1956.

My thanks to Zsuzsa and Judit Jaradi for translation and support.