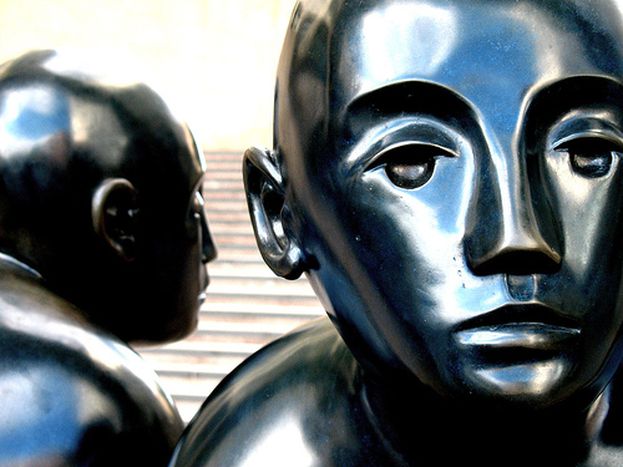 The River Neris splits Vilnius down the middle: to the North lies the university, the stadium and terraces with views; to the south is the heart of the capital: cobbled, colourful, and impeccable. But a sinister notice hangs from one of its bridges, followed by a telephone number

'There are people who care about you. Free emotional support helpline.' In 2009, Lithuania once again had the highest suicide ('savižudybė') rate in the world, according to the world health organisation: 34 out of every 100, 000 inhabitants committed suicide, triple the figure from Spain or the United States, and eleven times more the rate in Greece. Experts are examining a thousand variables to explain and reduce the Lithuanian desire to die. 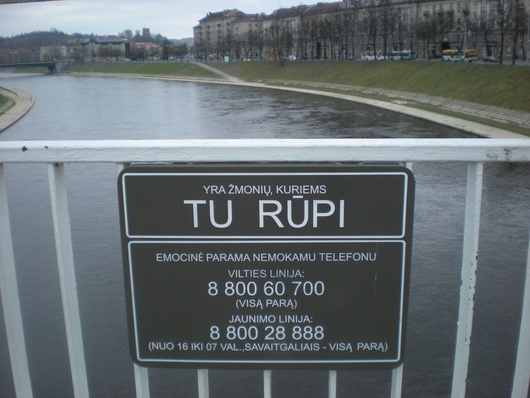 Alvydas Navickas, the president of the Lithuanian association of suicidology and deputy head of psychiatry at the University of Vilnius, summarises the historical background. 'Before the second world war, eight out of 100, 000 Lithuanians committed suicide each year. Most of the population were churchgoers living in the countryside. There was a strong community with a stable routine. After the war broke out and the soviets took power, Stalin deported the richest farmers to Siberia and set up the rest in kolkhozes (collective farms). Vodka and home-brewed alcohol began to flow like a daily anaesthetic. The rate grew every year to reach thirty suicides for every 100, 000 people in the eighties. With the collapse of the USSR, the number rocketed to an all-time high between 1994 and 1996 (46 for every 100, 000).

'Suicide is generally more common in large cities, but in Lithuania the opposite is true: the rate is twice as high in rural areas,' Navickas explains. 'The only new thing independence brought to rural Lithuania was unemployment. Everything else is the same: poor infrastructure, a lack of social services, alcoholism...' A third of Lithuanians live in rural communities, where poverty levels are three times higher than in urban areas. Half of the population do not have a shower or indoors toilet, and only 25% have running water. The mortality rate is 75% higher than in cities and 400, 000 young people have left the countryside since 1990, according to a study by the European commission on poverty and social exclusion in rural Lithuania.Yet poverty does not fully explain the highest suicide rate in the world (there is no data from North Korea and most of Africa). Another factor is the communist past, as shown by the inclusion of the following countries on the 'sad list': Russia, Kazakhstan, Hungary and Estonia. The citizens of 'real socialism” lived in the shadow of a cold tombstone, which nevertheless sheltered them, protected them from fate. In 1990, many were shut out in storm like abandoned puppies.

Poverty and/ or depression 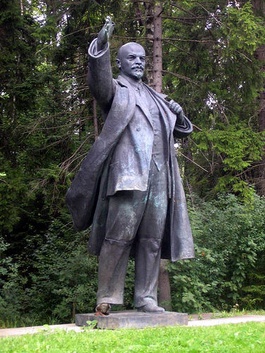 One of those places is Avizieniai, a district of the capital. It's an industrial landscape in ruins, with swollen faces and starving dogs. A 19- and a 20-year old pass the time sitting at the door of a concrete building. When I ask them whether they work, they exchange an ironic look. 'Work? Us?' They are wearing old threadbare tracksuits, their hair is greasy, their skin pale and dry, and their teeth yellow. A dusty path separates dry orchards and farms of rotten wood. By the wayside, a woman is burning rubbish; her face is tortured by alcohol, puffy, uneven. Her eyes are almost hidden. In response to our first question, she launches into a rant. 'Before we all had jobs, a life; the perestroika was a tragedy!' More than two decades have passed, but it is as if she is incapable of thinking of anything else. Her son joins in the discussion. 'We have nothing, there's no point working the land. People are killing themselves. Have you seen the state we are in? Just ask the grandmothers!' They don't want to talk, let alone be photographed. Only Sergei accepts, shrugging his shoulders; his tidy appearance denotes a hint of optimism. He keeps himself busy by burning weeds. 'Yes yes, there’s a lot of freedom. Sure, we have freedom to do anything,' he says sarcastically.

'We have nothing, there's no point working the land. People are killing themselves'

Ona Davidoniene, director of the state mental health centre, highlights another possible cause. 'Summers are short, days are dark and harsh. The inhabitants of northern countries tend to be more reserved, and avoid spontaneous behaviour. I fear that, if the crisis does not end, things will get worse; more people will grow tired of struggling day to day with no sign of any light at the end of the tunnel.' The suicide index improved again in 2007, particularly among young people (suicide is five times more common for men, especially those between 34 and 56 years of age). 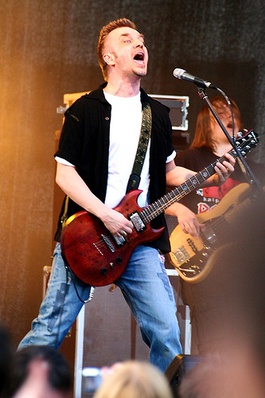 In Ireland, the authorities warn about the increase of cases in middle-aged people who have been made redundant. But for Paulus Skruibis, programme director at the youth psychological aid centre, the crisis is not that straightforward. 'Society and politics reduce the problem to an economic issue, believing that it depends on salary or standard of living,' he says. Skruibis is the joint leader of a youth anti-depression front with an ambitious and concrete goal. 'We have 130 volunteers trained to give psychological help and telephone support 24 hours a day (from May onwards), seven days a week; the service is free and confidential. We received 100, 000 calls last year. Of those calls, 8, 500 were very serious, with 149 people already in the process of taking their own lives.'

The offensive gained momentum thanks to the input of the most famous rock star in Lithuania, Andrius Mamontovas. 'We launched a television advertising campaign, organised a tour around the most affected areas of the country and printed 40, 000 postcards listing nine ways of dissuading people who may want to commit suicide,' continues Skruibis. 'Mamontovas signed them himself and gave them out at his concerts.' It's worked: as a result, the number of calls for help has doubled. The enigmatic poster hanging on that bridge in Vilnius is another part of the campaign. Rather than speak of deportations, crises or bad weather, it gives one simple piece of advice: Conversation can save lives.'

Many thanks to Alvydas Navickas, Vaida Cesnuleviciute and Laura Supjeva