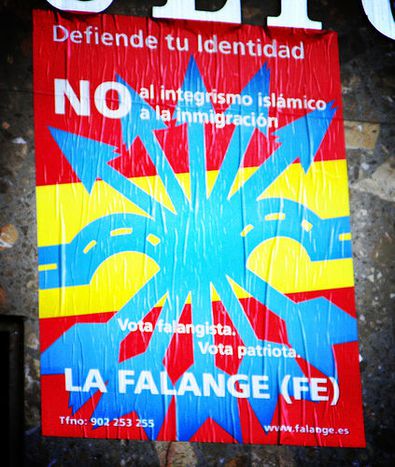 Spain’s extreme right: no to Turkey, no to globalisation

The Spanish people’s party’s failed attempts to create a strongly right-wing organisation has provoked up to six groups from this spectrum into planning their candidacy in the next European elections on 7 June, but their prospects look bleak

In the 2004 European elections, the total votes for all the extreme-right Spanish parties (or 'social patriots' as they prefer to be called) was almost 25, 000 in favour. This number is in contrast with the European members of parliament obtained by their French, Italian, Austrian, Belgian and Rumanian counterparts, who, alongside the eurosceptic UK independence party, formed the identity, tradition and sovereignty (ITS) coalition, presided over by Frenchman,Bruno Gollnisch. This was a political group of twenty members, which would take less than a year to break apart after Euro MP Alessandra Mussolini labelled the Rumanian immigrants in Italy as 'criminals'. This offensive remark did not go down well with her fellow members from the great romania Party. It triggered the dissolution of the group.

Manuel Andrino, leader of the fringe fascist inspired party the falange, blames the marginality of the Spanish movements on the late arrival of immigrants. 'Economic development has arrived much later in Spain than in other countries. And with it immigration has also arrived later, which is a mainstay of the discourses of some 'social patriotic' groups that have made progress in Europe,' he assures. The question should be posed then: does the extreme right need immigrants to be able to grow?

According to Jose Luis Roberto, leader of Spain 2000, the values of the failed ITS political coalition are the model that should be followed. This group, which defines itself as ‘national populist’, bases its discourse on a categorical rejection of the immigration which has materialised in protests such as the one that took place in the Ruzafa neighbourhood, an area with a large North African population. A well known lawyer and businessman of the Valencian community, a region in which Spain 2000 took two of the councillor posts in the last local elections, Roberto makes it clear to cafebabel.com which his mirrors are within Europe. 'Fraternal links join us with the French national front. We associate our proposals with those of the technical group of the European right; identity, family and tradition.' He doesn’t only refer to these, he also widely supports 'all the European movements that resist globalisation in all its forms: movements that oppose mass immigration and delocalisation of businesses, those that propose a return to the values inherent to our culture, that demand resolute social policies and insist on the restoration of the traditional elements of our peoples and of our national identities.'

The falange, or the unwillingness to abandon a legacy

A similar message, although disguised with a traditionalist aesthetic, is that of the Falange and Manuel Andrino, which in its ceremonies continues to use symbols of yesteryear, such as the blue shirt, the yoke and arrows or the ‘facing the sun’ song at the end of its ceremonies. They reject a reformation that has been called for by other groups to march in coalition, preferring unity and fidelity to some symbols that they consider to be practically sacred. Below this inherited mysticism from the between-war years, their words are not far removed from the Roberto’s previous ones: a Europe of patriotism, anti-globalisation and rejection of Turkish integration in the face of fears of huge migratory movements. 'We cannot comprehend nor accept that in that super structure which is the EU, there could be included those states which will never form part of Europe, nor of western civilisation, such as Turkey,' argues Andrino.

National front: the route of renewal

Between the falange and Spain 2000 there is the national front, a party that shares its name with the group led by Jean Marie Le Pen, and which has at its head a young leader, although with an ample activist career: Jose Fernando Cantalapiedra. The national front was formed by ex-members of the falange, who, in their ceremonies, abandoned any reference to the past, concentrating on a discourse which is anti-immigration and pro the prioritisation of national citizens, and which has had great results for their European equivalents. For weeks now they have been very interested in June’s appointment with the ballot boxes, trying out web 2.0 and purchasing the domain www.europeas2009.com. 'The assignment of a large part of the sovereignty, of decisions on public management which affect the everyday life of the citizens, such as monetary policy, immigration and border controls, as well as an important part of fiscal policy, depends on the EU. For that, we as citizens have a great responsibility at the European elections in June,' notes Cantalapiedra.

Alongside these three groups, Spanish voters will find ballots for groups such as national democracy or Spanish alternative, which are different shades of a similar ideological stance. This won’t prevent them, except in an extremely surprising turn of events, from being condemned to being ostracised in a sea of acronyms and divisions, in the next European elections. However, the wearing down of the traditional parties thanks to the global economic crisis, and possible conflicts of integration in a country, such as Spain, which has seen a rapid increase of the immigrant population in recent years, could open the way for them. Spain 2000’s leader sees it this way: 'We envisage a future in which a great movement for change will occur, one that we wish to be an integral part of, alongside other forces that have risen from the heat of the crisis and from the growing bad name of the old groups.'