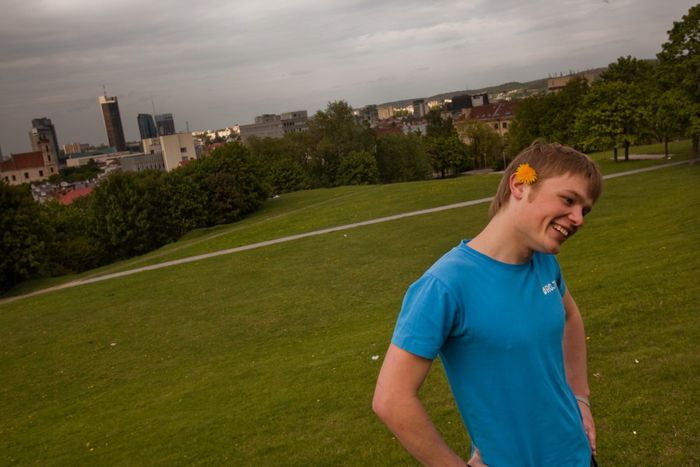 Twenty years after the Iron Curtain, the Baltic tiger is experiencing a bout of nostalgia. A young, trendy generation, fed up of hearing about the past, is looking back at a not-quite-so ‘carefree’ childhood under the soviet regime

‘The transition left me stunned. I was a teenager back then. When I watch archive material from the parliament today, suddenly announcing that we were free, I feel like weeping like an old lady.’ Giedrė Beinoriūtė smiles over her cigarette and latte macchiato. We are sitting in the trendy coffee garden at Kalvarijų No. 1 near the Žaliasis bridge with its imposing soviet statues.

The 32-year-old film director belongs to a generation of Lithuanians who spent their childhood under the soviet regime and experienced its breakup first hand. They aren’t nostalgic for the ‘unbelievably stupid things that they made you do as pioneers at school.’ That was yesterday – but they live in the here and now. Giedrė has become an overnight icon with her low budget film Balkonas (‘Balcony’). She admits shyly that most Lithuanians between the ages of 20 and 35 know her film. The plot is quick to tell. In a provincial town in Lithuania, Rolanas, the child of a divorce, moves into the apartment next door to Emilia. Night after night the children talk through a socket, or meet on the balcony in the daytime, until one day they agree to go on a real date.

The feeling with which audiences leave the cinema is much more important  - a cosy nostalgia amid retro clothes, rusty soviet cars and tower blocks. ‘I feel like I’ve made a journey into my childhood,’ is the constant message from fans. Nostalgia, granted, but a carefree version. Giedrė didn’t want any politics, a second Goodbye Lenin! or any pioneers. She prefers human relationships. ‘Values like honesty, modesty. They got lost in the breakup,’ says the director.

Film is not the only medium through which nostalgia is making inroads into Lithuanian public consciousness. It is more subliminal and is less often placed on display than in, say, Berlin. ‘Here a concrete policy of amnesia was instigated,' says Nerijus Šepetys, a historian at the University of Vilnius. 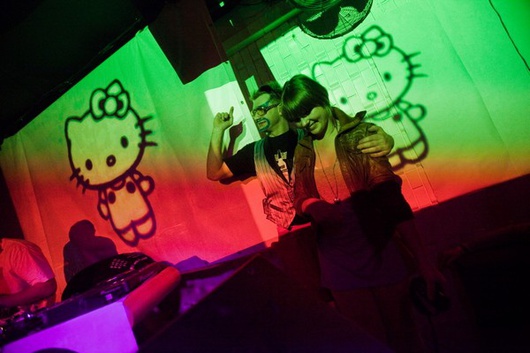 Nevertheless soviet chic is celebrating a general comeback in Vilnius. You need only take a stroll along the Pilies gatvė to see how. From matrioshka dolls to fur hats, everything for the retro-tourist is to be found there. However, soviet symbols have been forbidden in Lithuania since 2008. The young people of Vilnius party hard in a former atomic bunker, the Gravity, and drink Gira, the Russian bread beer kvas, which used to be poured into bottles from large yellow barrels, as can be seen in Giedrė‘s Balkonas. Now every supermarket has Gira back on the shelves.

Kristijonas, a young Lithuanian, presses a Hematogenas ('Hemotagen') Russian fudge chocolate bar into our hands. ‘Disgusting’ – he says. ‘We had to eat that as children, with calf’s blood, it was meant to be good for us.’ But even today there are some who buy it, just like the sausage with the red star, which calls itself ‘The Russian’. In Neringa, a restaurant on Gediminas Prospect, the capital’s main drag, you can listen to a pianist in a soviet retro setting, playing The Beatles instead of Russian folk. ‘Before we used to come here on special occasions with the family. Nothing has changed’, confirms his friend Mantas.

Grutas Park is in the middle of a forest 120 km from Vilnius, where the tinned mushroom-selling millionaire Viliumas Malinauskas opened a leisure park called Stalin World in 2001. He collected all Lithuanian statues and symbols from the soviet period and put the astonishingly big monuments on display. For 5 litas (1.45 euros, £1.24) you can touch Lenin, Marx and Engels. On the nostalgic menu of the open-air restaurant there is the usual borsch and vodka. The souvenir shop has everything from commemorative flags to cigarette lighters. Malinauskas instigated a full-blown national scandal. People would lay flowers at Lenin’s feet and be married there. ‘It was certainly attractive,’ says Nerijus Šepetys. ‘You just couldn’t learn anything from it.’ 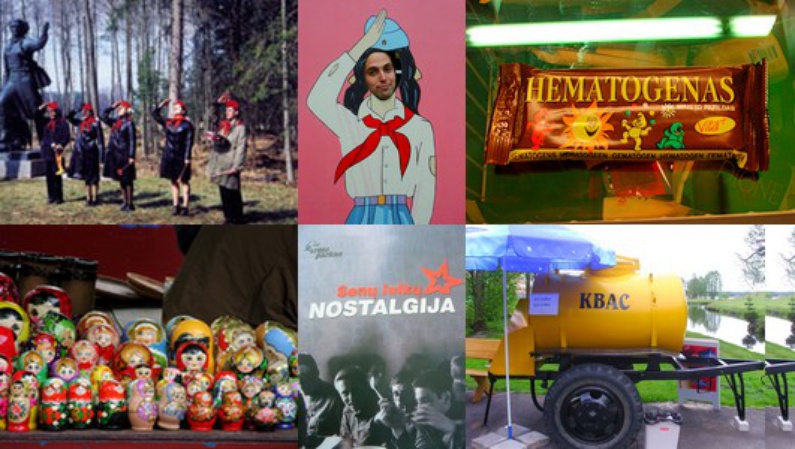 Today the park is no longer making waves. Severija Inčirauskaitė, a young textile artist with a short jet-black pony tail, recently visited Grutas with her six-year-old son. The park is a good place to explain to younger generations how things used to be, she says, standing between dangling gasmasks in her gallery Artifex, which opened in 2009 on the Gaono gatvė.

Severija’s work also deals with the phenomenon of nostalgia. She punches tiny holes in watering cans, saucepan lids or car doors from the soviet period, in order to decorate them babushka-style with flowers in cross stitch. The thirty-two-year-old calls these objects from her grandmother’s time ‘sticky kitsch’, fragments of pop culture. Severija is interested in the banal and everyday. The roses, leucanthemums and violets from the garden of a Lithuanian girl on the rusty car door of a Muscovite and water lilies on a dented lamp. ‘At the beginning rage made you want to erase everything soviet, everything was bad, the language was bad. Only now are soviet things becoming more popular. Some symbols of that time should be preserved.’

Since 2008 even the soviet bunker, once a TV station 5km outside Vilnius, has been riding the wave of nostalgia. Here, though, there is a very different tone. KGB agents roar at the 40 gulag tourists present at the theatre performance, force them to do press ups and lock them up in cells if they misbehave. ‘With the soviet bunker we wanted to achieve exactly the opposite- with no room for kitsch or nostalgia. I want to rip open the wounds of the past,’ explains Ruta Vanagaite, writer of the play 1984 – Back in the USSR. Six thousand people have already come to ‘inoculate themselves against nostalgia’ in the soviet underground. During one performance four people lost consciousness. ‘People tend to remember nice things - stability, being young, solidarity. But they forget that you couldn’t travel, couldn’t read couldn’t think freely.’

‘We definitely miss that stability from time to time,’ counters 36-year-old author Marius Ivaškevičius in his text on nostalgia. ‘But the insolvency of banks, inflation, everything that the west has taught us went head over heels here and met only naive, unprepared people. But I also see it as a chance to have lived in both systems. Not everyone has that chance.’