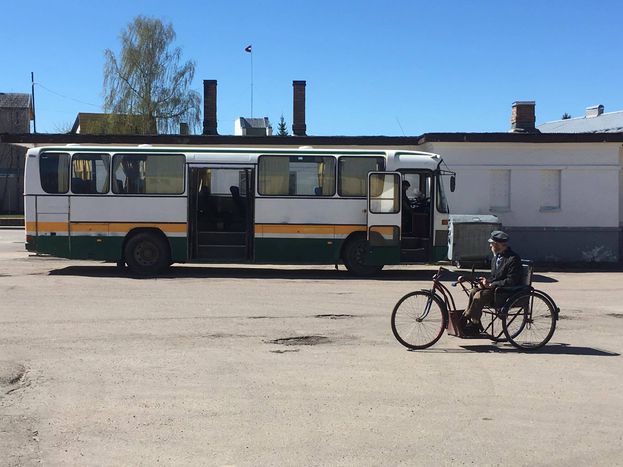 May is the independency Month for Latvia. It’s a great occasion for taking a careful analysis of a State that has experienced the shift from the Soviet Union to the European Union.

The 4th May 1990, Latvia gained independence from the Soviet Union. Actually, that was the second independence; the first one was in 18th November 1918, the famous independence war against the century-old Russian dominion. Today the country, after almost a century of Russian and German domination, is rising up again and shows itself the way it is: young, dynamic, scared.

Latvia choose quickly to switch from one Union to another. In the past, it was possible to travel in Russia, Georgia, Latvia and all the communist countries; today, there’s Schengen. In the past, everybody had a job and a house, today somebody has 10 houses and somebody begs for alms. In the past, freedom was very limited, today there is self-initiative as in the rest of the world.

A young and formally free nation that is still influenced from the Soviet experience. It’s possible to see that in architecture, in the economy, in the widespread use of Russian language, in the mentality. Cafèbabel has the chance to interview a lady born in the Soviet Union and a girl born in the Perestroika generation, the two sides of Latvia.

Could you tell me a positive and a negative aspect about Soviet Union?

Perestroika generation: obviously there wasn’t the possibility to choose. Education, work, travels, everything was imposed from the top to down. You couldn’t choose barely nothing about you own life. It wasn’t possible to escape from the State closed system. If I have to draw the Soviet world, I would draw a circle in which all the dots are connected; today it would be considered at least a Pollock. Maybe the solidarity and the community spirit is weakened. But everybody had a job. Unemployment didn’t exist and young people didn’t feel guilty about personal failures, felt as personal catastrophe. There was space for everybody. Maybe a limited space, but for everybody.

Soviet generation: I’m glad to celebrate Latvia independence. I strongly desire to be part of Europe, of this big continental project. When I was a child, my mum worked for an insurance agency and my dad was a school principal. We used to live in the countryside near Rezekne. There were no supermarkets, and the only available items were oil, salt, sugar and low-quality bread. Milk and meat depended on us. Only healthy food, there was no industrial products. We used to to work in the fields and milk the cows, we didn’t think about travelling, as nowadays young people do.  The house was given by the State, but you had to live with the entire family. That was your house, and obviously you couldn’t complain; little, ugly or dark, you had to accept it.

Working was guaranteed to everybody, even if it was often useless. There was a sort of egalitarianism, taking all the people to the lowest level. Engineers earned less than workers. Proletarian had to benefit of a socioeconomic acknowledgement. My dad used to earn less than some factory workers near our house. Telephone and medicines were free.

You didn’t have the possibility to choose about nothing, but your survival was guaranteed. You didn’t have to worry about running out of money, like nowadays. Your pension was guaranteed. The State took care of your survival, in exchange of your freedom. Nobody was scared about the future. Maybe it wasn’t a promise, but neither today’s ‘scarecrow’. There wasn’t today’s social diversity. There wasn’t that gap between the workmen and managers. There wasn’t today’s limitless individualism, every single person was part of a big common project, with its limits and its contraindication. But also with its qualities.

Perestroika generation: of course I do, I was in the crib when the radio announced the big news! Actually, it makes me laugh when I think that I was born in the Soviet Union too. It was over when I was 2 years old. I’m Latvian, and I feel like I was born in Latvia. Honestly, the soviet question doesn’t excite me that much. I almost never talk about it with my family or my friends. Actually, your questions make me smile.

Soviet generation: If I knew that it was such an important event, I would have written a diary about it. I would have written where I was, with who, what I was drinking and why. But I didn’t do it, because I didn’t know. Obviously, I knew that from 1986, from the Helsinki group, the Soviet Union was in crisis. Then, there was Solidarnosch in Poland. But I would be I liar if I said that I knew everything, because I didn’t. I lived in the countryside, and I found out that there was a poll for independence from the TV. How could I have known that? There wasn’t internet or mobile phones.

You can’t even imagine what were the consequences. A new police system, a new parliament, a new security system had to be created. Meanwhile, the citizens didn’t stop going regularly to work.

For instance, I remember the property issue. When the Soviet Union collapsed, nobody owned his own house. So, the Latvian neo-capitalist State, gave to its citizens a card with 40€ nominal value for every year of the person. I’ve put together my card and my mum’s card, and I bought an apartment near the station. I still live there.

But the big question is, how much our country has changed from that day to today. Why there are still unopened documents, where there are written the names of the members of the KGB (Komitet gosudarstvennoj bezopasnosti: it was the name of the main Soviet Union’s security agency and secret services, from 1954 to 1991).

And these documents are in Riga, not in Moscow, controlled by the authorities. The parliament says that it’s better not to cause an outcry in such a young and fragile country. That’s because of the politicians in charge, who are the same of the past.

In your opinion, what’s the main difference between European Union and Soviet Union?

Perestroika generation: that’s a difficult question. I don’t know what to say, it’s hard to make a comparison. They’re too different. Maybe the main difference is in the freedom of movement, travelling and working. And democracy.

Well, those are all positive elements about nowadays’ situation. Nothing else to add?

Perestroika generation: I don’t really know what to say. I don’t even know why you’re asking me questions about Soviet Union. I wasn’t there. Everything I know comes from different and confused stories. There are nostalgic people and opponents. How can I have a personal opinion?

Can you tell me something more?

Soviet generation: What do you want to hear from me? Freedom is very important! If we sit and have a bottle of wine, maybe I can tell you something more. Perfect, let’s meet tonight at your place. But we can’t be late because tomorrow I want to go cycling. It will be sunny, and that was unusual both in Moscow and in Bruxelles

The next day, it was actually a sunny and warm day. After a bike ride, I keep on going with my interview

What do you think about the Independence Day? Is it right to celebrate it?

Perestroika generation: many people celebrate Independence Day here, but many people are against it. The city is divided in two: a half brings flowers to the war memorial that symbolizes Europe’s liberation from Nazis, and the other half who has lost its relatives in Siberia. Also, the war in Afghanistan divides: some people remember of their heroes dead for the honor and the greatness of the Soviet Union, some people cry over victims of a useless war. There is a war memorial against the mujahidin in the main square, behind the orthodox church. Today, tat memorial is full of roses. But there are also many people who suffer in silence in their own houses, that quietly demonstrate his disagreement regarding this celebration. By the way, that issue concerns only older people. Us, young people, except for those families that had had victims and that want to commemorate them, we don’t take part to the celebration.

Soviet generation: I won’t go. My father has been deported in Siberia after the liberation, which I call soviet invasion. He spent the best years of its life there. He was deported because he used to play the cello in the German military orchestra. Anybody who had contacts with Germany were deported. He was strong and he funded a new orchestra there. It was near Novosibirisk, I can’t tell you more than this. He worked in a steel mill. I still keep his letters. Rigorously written in Russian, because Latvian was forbidden and it would have been censored.

In the past, you could have a lot of money, but there was nothing to buy. Today you can buy anything you want, but you don’t have money.