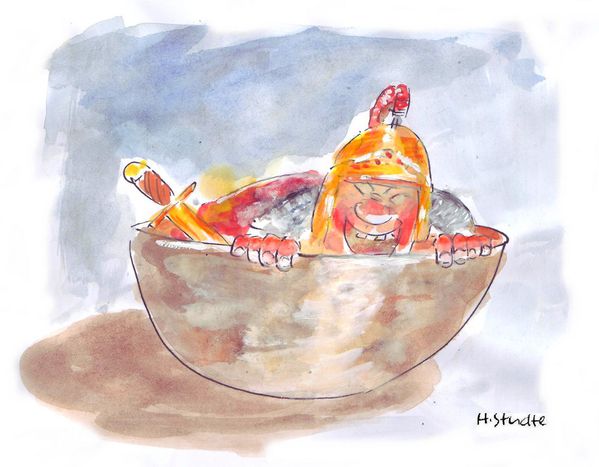 Being 'as sour as vinegar' is a saying that's recognisable across the continent, but why? It starts with the word itself - vinum acetum means 'wine turned sour'. Idiom of the week

Since time immemorial, vinegar has been used as a seasoning. When mixed with water in ancient Rome, it created a drink called ‘Posca’. Citizens and legionnaires drank it. It was also used as a disinfectant to soothe Jesus’ body on the cross rather than to torture him. Even Roman emperors such as Hadrian and Trajan demonstrated their solidarity with the people by openly consuming the mixture. The less-widely used Polish expression kwaśny jak ocet siedmiu złodziei is used to describe sour food, but it translates to: ‘as sour as the vinegar of seven thieves’. In the 16th century, thieves travelled through cities looting the dying and protected themselves from infection from the plague with a special vinegar concotion, known in England as the four thieves vinegar and in France as the vinaigre de quatre voleurs. They should have known that it was more constructive to treat others kindly rather than meanly, aka the British, German and French expressions go: you can catch more flies with honey than with vinegar, mit Honig eher Fliegen fangen lassen als mit Essig and on n’attrape pas des mouches avec du vinaigre.

When used to describe people, vinegar lends a more caustic edge to a personality: you’re simply as sour as vinegar in England and Poland (kwaśny jak ocet). The Turks go one further and warn speakers not to let anger eat away at them, since Keskin sirke küpüne zarar (‘sour vinegar damages its barrel’). A gloomy British sour-puss (‘bad-tempered mouth’) becomes a more scroogy pisse-vinaigre in France. John Steinbeck latched on to the more positively connoted ‘piss’ element. The writer coined the American idiom full of piss an’ vinegar in 1938, possibly after ‘pep and vinegar’ in fellow compatriot Peter B. Kyne’s 1922 novel They Also Serve. The ‘vinegar’ has probably been mistranslated from the original saying full of vim and vigour, which translates to mit Saft und Kraft (strong and full of flavour) in German. In Germany, sauer macht lustig means being acidic makes you happy. Originally, this meant that sour drinks encouraged your appetite, increasing your ‘lust’ for the food. Since research has proven that drinks containing vinegar improve muscle recovery, sportsmen and women have reverted to drinking Posca.