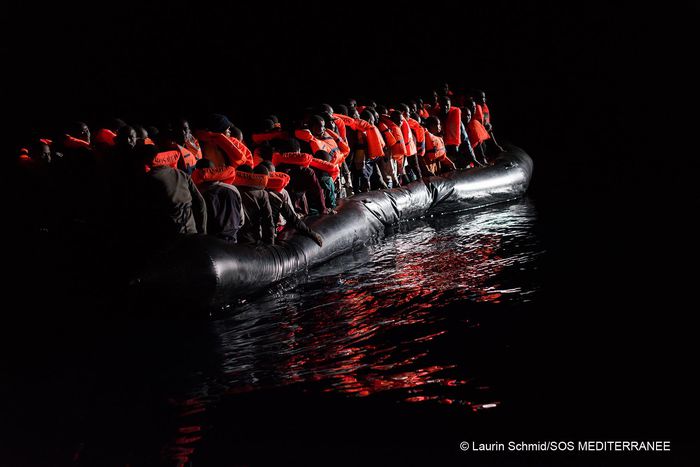 SOS Mediterranée: One year of solidarity at sea

Since 2015 the French/German/Italian humanitarian organisation SOS Mediterranée, which exists only thanks to the participation of vounteers and doctors from Médicins Sans Frontiers, has been saving lives in the Mediterranean. We were aboard their flagship, the Aquarius, to celebrate its first year at sea.

Thirteen thousand refugees taken in and 8,755 lives saved at sea during 64 rescuing operations since February of last year. If it were only a matter of numbers, SOS Mediterranée, which was founded by humanitarians from Italy, France and Germany to face everyday challenges in international waters off the Libyan coasts, might well declare the mission accomplished.

However, what hides behind the rescues and the (too) many dead - 5,000 in 2016 according to the UNCHR - is a wonderful story of love and humanity that is absolutely worth telling. The positive atmosphere can already be sensed while getting on board or speaking to the young volunteers and to those playing their role on the mainland. Or even just by stopping for a few moments and observing their everyday life at sea, where the horizon traces a line that looks like a huge frontier.

SOS Mediterranée Italia was created on 19 February 2016 in Palermo, as the Italian branch of a civil society network initially founded in Germany in May 2015. Its aim was simple: rescue all the souls they could in the Mediterranean, and show the world one of the most dramatic tragedies in human history. A year has now passed, and the sun is shining on the dock of Palermo, where recently hope and fear often arrived together. On the Aquarius, a 77-metre-long former fishing boat now serving SOS Mediterranée Italia, the organisation is celebrating the anniversary of their first mission at sea.

"Migrants are the scapegoats of Europe" 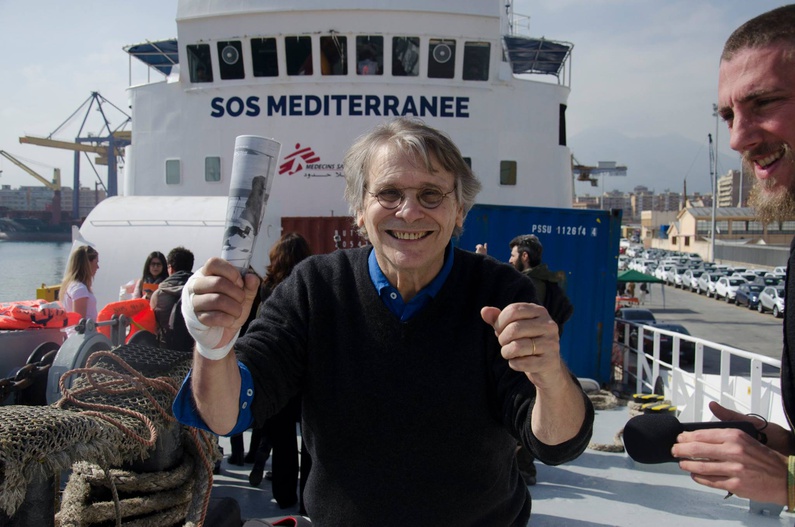 On board, together with the society's German president Klaus Vogel and representatives from SOS Mediterranée France, Palermo's mayor Leoluca Orlando gave an example of extraordinary Sicilian hospitality: "I was recently interviewed by a journalist from Der Spiegel who asked me how many migrants there were in Palermo. I said 'There are none': whoever arrives here is a local for us."

The guest of honour, writer Daniel Pennac, added: "Migrants are the scapegoats of Europe. SOS Mediterranee is the pride of Europe and France in a time of total moral regression."

This statement was a response to the populist trends currently spreading across Europe; including in Pennac's native France, where Marine Le Pen's popularity is growing. However, it was also a response to the news that prosecutors in the Sicilian city of Catania are launching an inquiry to gather more information on the huge network of people traffickers operating in the Scicilian Channel.

"We are cooperating with the authorities, and our purpose is completely different from that of the traffickers," affirmed SOS Mediterranée Italia president Valeria Calandra. "Moreover, our financial support comes from private donations. We could never support those trafficking human lives." UNCHR spokeperson Carlotta Sami is on her side: "NGOs are an expression of civil society, and their engagement in saving human lives is essential. During the last two years, they were responsible for the rescue of 25% of the people found off the coasts of Libya and Italy. Their role is of paramount importance." 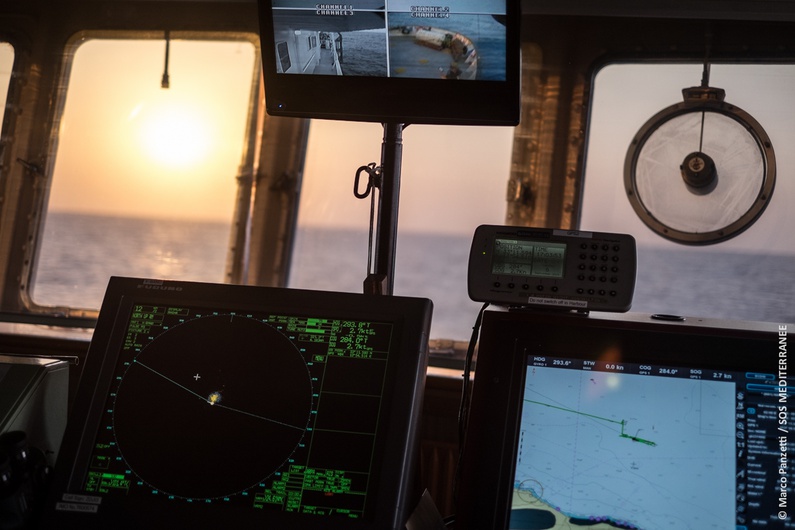 However, the young volunteers are the real heroes here: "Always enthusiastic", in the words of Valeria Calandra, who works everyday in the Search and Rescue unit without a precise timetable and often at all hours of the day. A psychologist from Livorno who worked in reception centres on the mainland is now ready to help directly at sea. Pablo, a scuba diver from Ecuador who has been living in Italy for a year, decided to come aboard three works ago. "I took part in some rescue operations and I learnt it can happen any time, event at night" he tells us. "Usually, the manoevering starts after a target is located; we move towards it on a boat with interpreters speaking French, English and Arabic. Then, after evaluating the situation, we distribute life jackets and begin the rescuing; dividing them in groups of maximum 20 people each."

Aboard the Aquarius there is also a Médicins Sans Frontières team ready to assist. At the beginning of last February, Pablo was among them when they rescued 786 migrants during 7 operations lasting more than 24 hours. "When you're physically there, it shocks you to see them wet, often barefoot and scared, especially at night. I haven't been here for too long and I have yet to witness really 'shocking' moments," says Pablo.

It's children that the rescuers are most moved by. "Aquarius was one of the few boats patrolling the Mediterranean all winter long," Valeria tells us. "Around a quarter of the refugees we saved were children, and about 85% of them were under 18 and travelling without a parent." Some babies were even born at sea: like Dentiné Alex, Newman Otas, and Emeka Lska Favour. 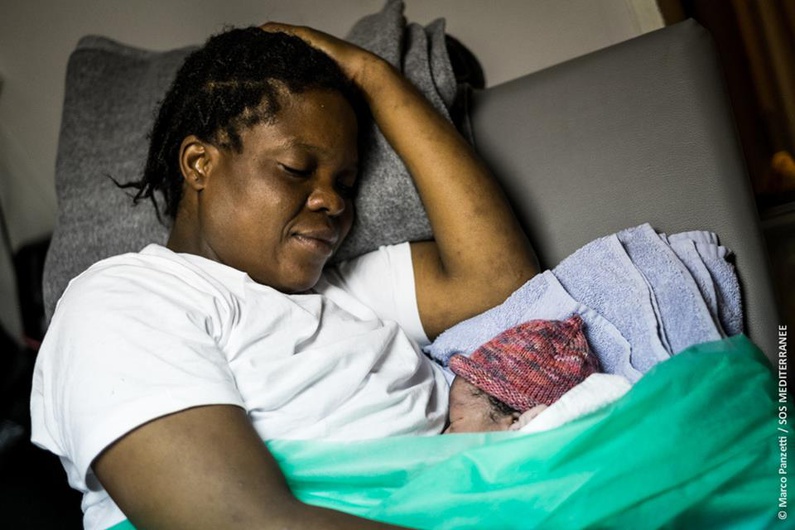 In Palermo, young volunteers are also doing their best to support SOS Mediterranée Italia. Irene, a 25-year-old psychologist working in logistics and coordination, says: "I committed to this cause as it is the only possible solution to tackle the migration crisis." We met her in the buildings owned by the Palermo Regia Marine Army during the two-day exihibition "Aquarius", which showcased videos by Amelia Giordano and Stefano Ferri and photography by Marco Panzetti and Andrea Kunkl.

The pictures taken by the two Italian photographers on board describe the emotions and the sense of humanity that can be sensed among the Aquarius staff. They include scenes of Muslim prayers; Nigerian women singing; the smiles or the fear of those being rescued; pictures of children being saved; maps of sub-Saharan Africa; a sketch of someone's village of origin; the rafts; and hopeful messages written in French: "God bless the Red Cross and SOS Mediterranée." 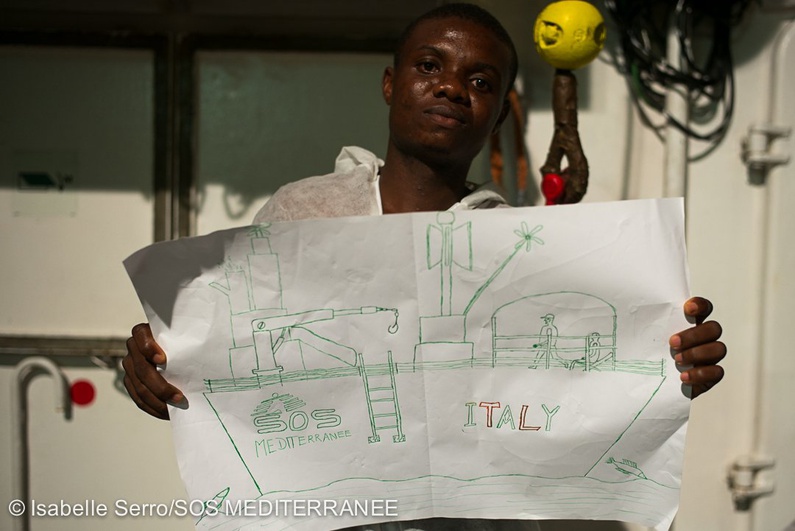