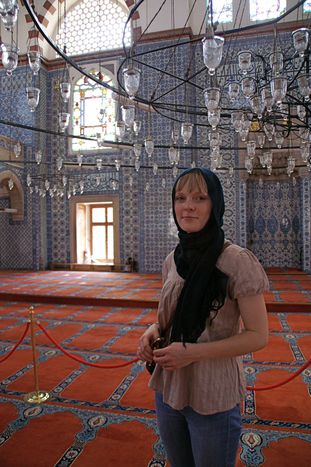 Guards make sure that everyone picks up a carrier bag and takes their shoes off before placing even a toe onto the carpeted steps of the Blue Mosque. We’re three German, British and Polish tourists who have come prepared with headscarves, but inside we see lots of bare-headed female tourists

How traditional is Istanbul’s biggest mosque going to be? We’re in the Blue mosque for the first time, and it feels spacious, bright and relaxing. Its colourful (mostly blue) ceramic designs are very different from the imposing baroque marble of great christian churches. Candelabras are set very low, at the base of the huge dome, which probably makes reading easier. A Turkish member of the team later explains that it’s done to create an atmosphere that’s nice and warm — which is certainly true.

Non-Muslims, what to expect?

Turkish visitors are not only here for serious prayer, but also simply to be here. The prayer balustrade is a popular photo opportunity. Some Turkish tourists take photos of themselves with their mobiles. Beautifully-dressed young Turkish women pose a lot for the camera, holding their shoe bags in one hand. A pair of very young children in gold and white suits are there too, but for a different reason— to take part in a ceremony. At prayer time itself, all tourists are asked to leave the mosque. Prayer policy varies in different mosques. When we peered through a glass door into a small (untouristy) mosque in Sultanhamet while men were praying, we were shooed away. In the New mosque in Eminönü, tourists sit behind a balustrade and watch men pray. Worshippers there seem used to the noise of tourists, security staff and late comers. When we see a sign for ‘women’s prayer only’, we sit on our knees and watch. Wooden screens separate us from the outside. Through the small holes we see a guard passing by who gives the final call: ‘prayer time, only for prayers’. Is this what the world looks like from behind a burka grill? It’s a different place without tourists. Silence, just the sound of a vacuum cleaner, the guards’ steps and the occasional ring of a mobile phone. No one seems to have noticed us, but we feel like trespassers. To blend in, we take some books and religious magazines from a wooden stand and leaf through them as other women start to arrive. 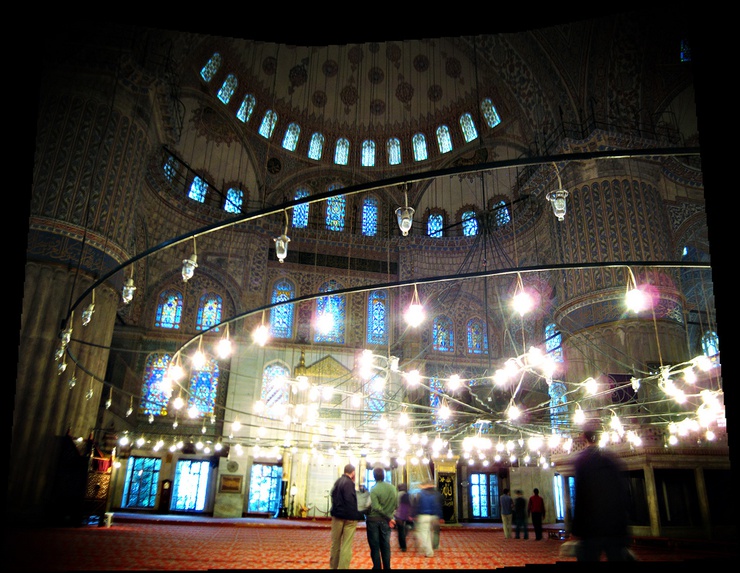 After a while, a woman addresses us. We smile and nod, and she says something and goes back to her book. But before long an elderly woman speaks, and when we don’t reply, she speaks in English. She asks us where we are from, what our religion is, and smiles as we answer. ‘Just relax,’ she says, ‘you can stay; we all believe in one God.’ She offers to pray with us, finding rosary beads for us to use, and we sit in a row. ‘When we pray, we repeat short formulas, but most of the time you pray as you want, because each of us is different. So just say what is important for you.’ Hands on the chest, heads lowered, we start the prayer, which is a sequence of movements. You begin standing, then kneel, bend and touch the floor with the forehead, then go back to standing position. At some point a young woman in front of us comes over, visibly amused, and corrects our hand position. As we become more relaxed, we listen to the imam's voice. It sounds so different from the wailing sound we hear on the streets, but like a man calling us softly from far away. After prayer, several women come up to us, eagerly answering our questions. ’Mashallah’, exclaims one young woman who gives us her rosary beads as a gift. We feel amazed and privileged to have been made so involved. 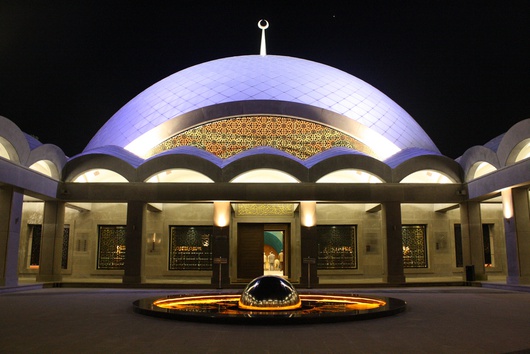 It seems as if women are banned from praying in the greater part of the mosque. A matter of fact guard we approach says that no women pray in the centre under the dome, where a few men are finishing prayer. One Turkish guy later explains that women generally worship at home. Indeed, the prophet Muhammed said: ‘The best mosques for women are the inner parts of their houses.’ Islamic law says that men and women must be separated at prayer, whilst some mosques don’t admit women at all. Things could be changing, though. Earlier this year, internationally acclaimed designer Zeynep Fadıllıoğlu unveiled a radical new mosque design in Istanbul’s new Şakirin mosque in Üsküdar. Addressing cramped women’s quarters, Fadıllıoğlu designed an equal terrace for women.

A handful of men are now sitting around, talking and laughing. They make the place seem much more ‘alive’ than a traditional catholic or protestant church. On leaving the Blue mosque and chatting to the tour guides outside, we discover that the mosque is open twenty-four hours a day: ‘a mosque is the house of God’. Homeless people are allowed to sleep in the mosque - one reason why there are carpets. People in distress can take refuge here, they say, where police are not allowed to get at them. With its traditional but forward-thinking, modern but conservative feel, the many different facets of the mosque continue to amaze.