Taking advantage of a potential of an average of almost 3,000 hours of sun a year, the Spanish region is a pioneer in the ‘third economic revolution’

‘We are currently facing a third economic revolution, a revolution which, after the industrial and technological revolutions, will consist of the transition from an economy dependant on carbon to an economy based on renewable energy.’ These are the words of José Luis Rodríguez Zapatero, the president of the Spanish government, in the speech he made in 2007 during his visit to the Solúcar platform. Solúcar, one of the most ambitious projects in the world for the production of energy using the suns rays, is situated around eighteen kilometres from Seville in Sanlúcar la Mayor, a town with little more than ten thousand inhabitants.

The excessive cost of these renewable energy installations and of their maintenance has caused questions to be raised about their ability to be a realistic alternative to other forms of energy. However, this doesn’t worry the Spanish government. As Zapatero emphasised at Solúcar, 'The countries that will benefit in the medium term will be those that distance themselves from the carbon economy, and those that do not move towards nuclear energy.' French president Nicolas Sarkozy and British prime minister Gordon Brown disagree. So Spain is preparing itself for the energy revolution. Meanwhile, it continues to buy electrical energy from French nuclear centres.

Andalusia, land of the sun

The search for solutions that will reduce the effects of the dreaded climate change has provoked various initiatives that not only claim to offer clean energy, but also aim to be a source of income for the companies backing them. According to a study about renewable energy by the Reference Centre of the Union Institute of Work, Environment and Health (ISTAS), this energy provides work for 188, 682 people in Spain, 89,000 of those directly. The renewable energy sector is growing in Spain and according to official data in the last four years, the production of renewable energy has increased by 50%. 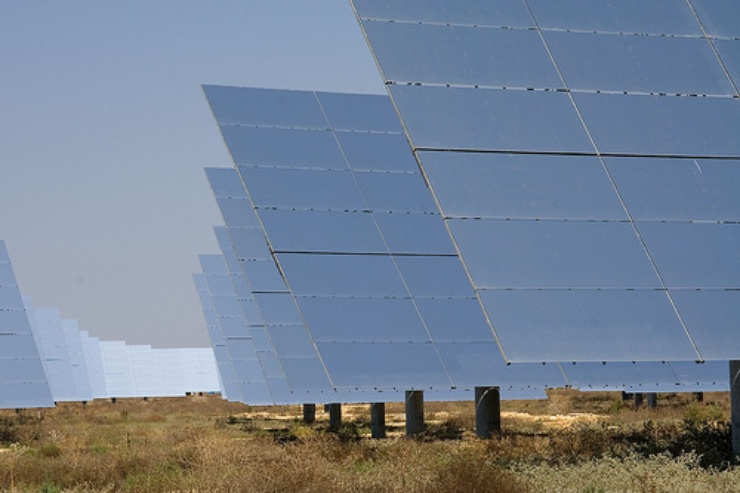 An example of this rise in renewable energy is the Solúcar platform, which was opened on 30 March 2007. The Andalusian regional government dedicated 3.7 million euros (3 million pounds) in subsidies to the company Abengoa to help establish this project, but this is scarcely 0.31% of the total cost, which has risen to the impressive sum of 1,200 million euros (958 million pounds). The European commission’s ‘fifth framework programme’ has supported funds which help the project, in which one of the participants is the French company Saint-Gobain, which specialises in high quality glass and mirrors.

Abengoa is the biggest company in Andalucia and forms part of the Ibex 35 (the Iberia Index, the main stock market index in Spain), that groups together the main Spanish companies that are listed on the stock exchange, with a market value of around 2,000 million euros (1.60 million pounds). The Solúcar platform is the jewel in the crown of the solar division, which has participant instillations in the United States, Algeria and Morocco.

Light for Cologne or Brussels

It will not be possible to see the Solúcar plant working at full capacity until 2013. At the moment hopes are that it will produce energy for more than 150,000 homes, that is the equivalent to the supply for the city of Seville, Toulouse or Cologne. All of this is thanks to its 300 megawatts of power, which will prevent the emission of 185,000 tons of CO2 every year. Solúcar’s huge installations extend over eight hundred hectares of land.

At the moment only two of the five plants are functioning: Sevilla PV, the largest in the world for low concentration photovoltaic technology, and PS 10 which uses tower technology. This consists of a field of heliostats or moving mirrors, which position themselves according to the position of the sun. They reflect solar radiation, increasing its potential over 600 fold, onto a receptor which is situated at the top of a tower. It creates a landscape that looks like something out of a science fiction film. This solar heat is transferred to a liquid, which could be water or melted salts. The aim is to generate steam at a high temperature that will expand in a turbine linked to a generator in order to produce energy.

The sun will revolutionise a village

The Solúcar platform has not only revolutionised the renewable energy sector in Spain, but its economic impact in the area has also been considerable. The mayor of Sanlúcar la Mayor, Juan Escámez Luque, happily comments that the plant has generated ‘more than 500 jobs between direct and indirect employments in the construction phase.’ And the arrival of Abengoa in the area has been a blessing in economic terms: ‘We have become an international reference point in the field of solar energy.’ The energy produced in Solúcar can even be enjoyed across Spain. ‘The energy that is produced here is put into the grid and is distributed throughout the country,’ concludes Escámez.