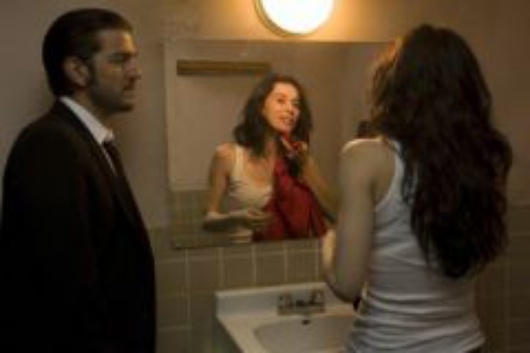 In Spanish director Agustín Díaz Yanes' heist film Gloria (Victoria Abril), Aurora (Ariadna Gil), Ana (Elena Anaya) and Paloma (Pilar López de Ayala) plan and execute a robbery that even Ocean's Eleven would admire.  Women in gangster films usually play submissive mothers or obliging prostitutes, but these four get tired of being kicker around, beaten down and spit on. They take action to revenge those men, who treat them as sexual objects or as mere "pretty women" waiting to be saved. Most of the film's plot is set in Mexico, but the fact that these girls are Spanish is constantly mentioned to explain their tough behavior. Mind you, these references come form the lips of male characters looking for cheap explanations for the girls "abnormal" activities. Regardless of the criminal milieu, these women here are actually standing up for maltreated females all around the world. Therefore, besides the flamenco dancing and bullfighting references, the film does not communicate a message about Spain or Europe specifically.