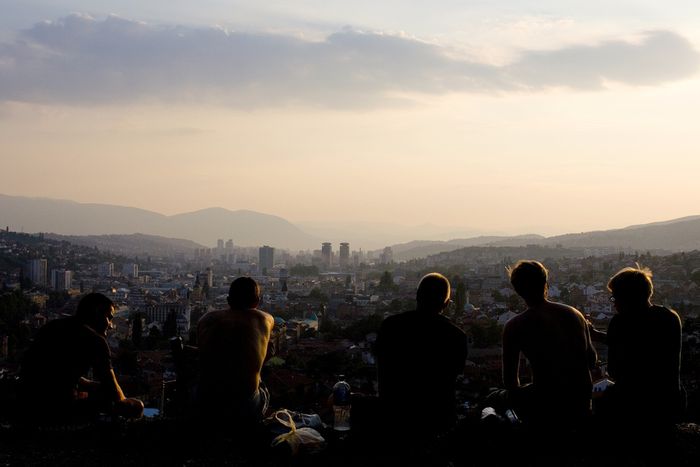 Social networking in Sarajevo: analyse this (over Bosnian coffee)

Bosnia's capital wears its war wounds from the 1992-1995 war with Serbia honestly, the signs on its bomb-shelled buildings and pavements. What about its mental scars fifteen years on? Amidst a blaze of foreign healing initiatives, few private psychologists and one 'social networking internet cafe', this is a society which is resolved to solve its problems - globalised as they are - over coffee

A London telephone box sticker adorns huge glass door panes in Ciglane. The tourist red disrupts the communist-era district's visual identity. This is the first internet cafe specifically emphasising social networking in Bosniaand Herzegovina, according to its owner in Sarajevo, Tarek Kapetanovic. On the top floor four computers are dominated by a gender-equal teenage youth, who are partially clouded in cigarette smoke. Below, the two cabins for skype calls stand momentarily empty on this winter afternoon. 'No-one here invented anything,' says Tarek affably as we sit in his colourful cafe, a former disused building owned by his father. Named ka5an after the blogger username that has identified Tarek online over the last 12 years, it may well be the first cafe arising from a blogger's personality in the region. 'Everybody's looking for a job, everybody's surfing the web,' says Tarek, a tidy nod to the 60% unemployment suffered by a country where some 31.2% surf online. Now the 31-year-old is pushing Bosnia to stay open to the world and connected with each other.

Psychology in a small country 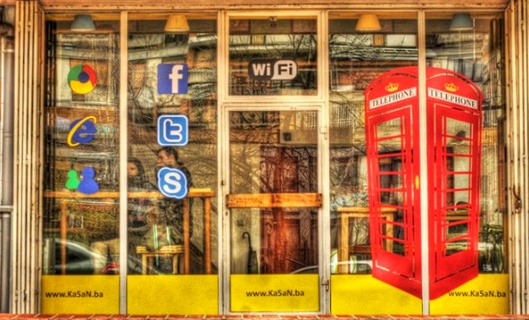 Bosnians are locked into microsocieties. It's a necessary evil thanks to the complex political structure of the country.Try and muster this in a sentence: fourteen administrations for 4 million people governed by a shared institution of a rotating Croat, Serb and Bosniak president every eight months. Fifteen years since the end of the war was marked by the anniversary of the Dayton Accord on 14 December 2010. The peace treaty signed in Paris led to a quasi partition of Bosnia: today, 51% belongs to the 'Bosnian Federation' (Bosniaks and Croats) and 49% to the 'Serb Republic'. Issues like foreign policy or the budget are managed as in any other country. But matters like education and telecoms are defined according to these micro-administrations. For Tarek's business, it means there is no independent regulatory body. The main operator BH Telecom (in the Federation; the Serb Republic has its own - ed), 'takes money from people. We have ADSL so people can communicate with their kids and pay cheaper.' Beside us, groups of men drop in and order thick Bosnian coffee, which is similar to Turkish coffee. They have no intention of going online, turning the concept of this 'cybercafe' on its head, transforming it into a regular cafe. Why did Tarek leave the climes of Florida to return to a post-war Sarajevo? Up pops the s-word. 'People in this society have friends. We don't need a shrink!' he laughs.

'Bosnia is a promised land in psychology,' admits Dzenana Husremovic, a psychologist specialised in methodology, as we hollow out an empty lecture hall at the university of Sarajevo. Psychology was only established as a department here in 1989. 'You have traumatised people. People born during the war. It's a specific character of a multicultural country which brought us to war. We’re trying to restore this multicultural paradigm.’ The country's history appeals to various therapeutic disciplines. In The Art Therapy SourcebookCathy A. Malchiodi discusses how when deprived of basic necessities during the 1992-1995 siege of Sarajevo, orchestras concerts and choirs were 'a particular story of the people of Sarajevo.' Foreigners like the Slovenia-based German Claudia Knoll, who ran a six-month 'music therapy project Sarajevo' in 2010, are still enjoying exploring the capital's psyche.

Four short days in Sarajevo mean I narrowly miss the phenomenon of the Moroccan healer Mekijem Torabi, who set up camp at the Zetra sports centre. From 10.30 til 4pm everyday except Fridays throughout October and November, citizens from Bosnia as well as neighbouring Croatia and Serbia saw the parallel queues for biometric passports at the police stations and raised them at their game. 2, 000 people a day, young and old alike, were queuing to watch the Moroccan mystic 'heal' bottled water from Sarajevo Brewery by touching it. The spiritual event was free, though the centre charged 1 convertible mark or KM (50 cents or 43p) for parking spaces and another KM for the bottles. Ruminations on the business practices of this highly successful character aside – some internet forums brand him a fraud - he seems to fill a gap where an entire region has its arms open to optimism and hope.

So are Bosnians wedged in the post-war clutches of the therapist's sofa? Four days of avoiding the cliché in Sarajevo and meeting people who lost their fathers, who are part of a nation which literally feels fatherless, was pinpointed by Tarek mentioning it almost gratuitously. 'Today the social pathology is very close to a general one. We fell into the trap of globalisation,' assures private psychologist Aneta Sandic at the grandiose Becka Kafana ('Viennese Cafe' of Sarajevo).

'Bosnians fell into the trap of globalisation'

The problem with psychotherapy in Bosnia, she argues, changing the subject, is the lack of theory, of educators, of experts. ‘You work with pain and deep suffering,' she says. 'You need knowledge, supervision and basic practical knowledge. For the last 5-10 years Serbs and Croats have been coming to do training. Usually we do it over skype calls.' Before that, people had to go to Zagreb or Belgrade – ‘which has its own history of psychologists’ - to study it. One of the most famous Balkan psychiatrists is the former Bosnian Serb leader Radovan Karadžic, accused architect of ethnic cleansing in Kosovo and Serbia. In 2008 he was discovered in Belgrade working as a New Age healer. ‘He was helped,’ believes Sandic. ‘People want to forget. Humans make war, it tells us a lot about us. Like ants, or rats. I have no comment for people who kill to kill.'

‘Psychology in Bosnia has this curse that people can be the best psychologists for themselves,' laughs Dzenana. 'Bosnians are very strong in social networking. We solve our problems over coffee.’ Aneta Sandic disagrees. ‘We were like that, but now there’s a lot of envy and competition. It’s globalisation.' She has a point – sort of. The young Bosnians I meet are running out of overflowing cafes parallel to the river to catch Avatar in the cinema. They're telling me they dream of studying abroad. But they're also angry about that shooting that took place on the bridge they crossed the other day by a young 'war kid'. Sandic's work defines the soul as being very slow, something to be approached from different angles. It's a bit like Bosnia. ‘During world war two we had tradition and divisions as we do now,' she explains. 'Then in Yugoslavia everything was equal. Then what happened happened, four years of chaos. Now we speak of tolerance which didn’t exist between the 50s and 80s. The structure of our own reality changed. We had such a big social trauma.' 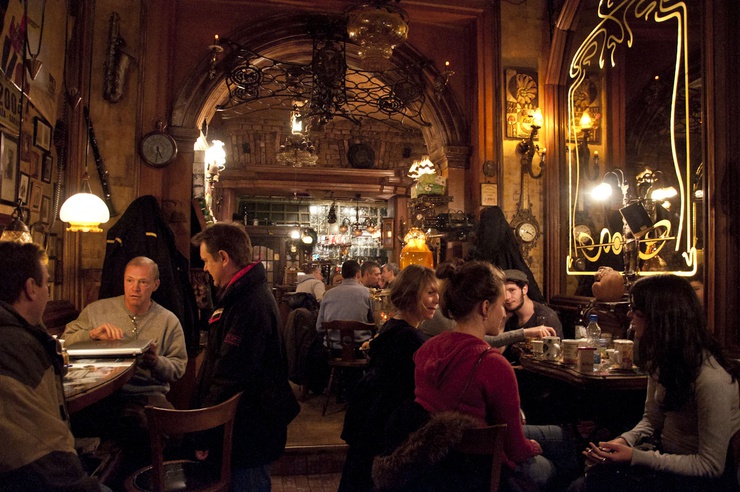 Dzenana believes there may definitely be more of a story for these symptoms in Bosnia after the effects of visa liberalisation; for three months now Bosnians have been able to travel to the 25 countries of the Schengen zone without a visa. ‘That will help us break the romantic picture of finding a job and so on easily,' she finishes. 'People are going to be exposed to different cultures. It will strengthen their identity, help understand ‘who I am'.’ Sarajevo's European horizon might be dotted with new blue passports, but it's some consolation. For example, it won't be taking anyone as far as the red telephone boxes of London, which is not in the Schengen zone.