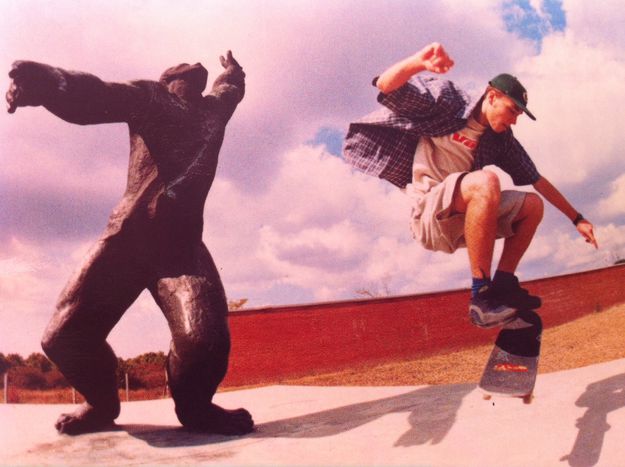 Silence of statues in Budapest's Memento Park, House of Terror

Budapest’s Park, built shortly after the fall of communism, commemorates the visual iconography of four decades under communist rule in the Hungarian capital. In sharp contrast to its frozen lethargy, the House of Terror bursts with life. Could things have been different for Hungary today if it had a revolution back in 1989?

Fluffy patches of clouds slowly drift over a windy hilltop at the outskirts of Budapest. There is little urban settlement out here and the scenery is dominated by a red brick gate with bronze casts of Marxand Lenin greeting the curious visitor. Opposite the entrance to Budapest’s Memento Park is a 12-foot tall grandstand carrying a pair of oversized iron boots that once belonged to a colossal statue of Joseph Stalin. ‘Sure you want to go?’ a local asks. ‘There’s nothing out there. It’s far from the city.’

Inside Memento’s walled gates the statues are scattered neither chronologically nor stylistically. Built in 1993, the park is dilapidated, as if built in the era it tries to convey only to have gradually fallen into decay over the years. Without detailed plaques the statues don’t say much unless you pay the 1, 200 ft private guided tour. A group of Finnish political science students lazily roam. ‘We came here to learn more about communism. It was bad. Didn’t work,’ they explain laconically. After the fall of the local nazi government in world war two, Hungary spent forty years under communism, much of it marked in public consciousness by the 1950s stalinist repression. When the colossal 25-meter tall statue of the soviet leader in Budapest was sawn down from the boots up in 1956, it seemed the regime had toppled with it. Yet in the decades following the brutal soviet reprisal, from the 1960s onwards, the country experienced a moderate and long lasting version of communist rule based on dull, social content, making Hungary ironically, the ‘happiest barrack of the eastern bloc’. 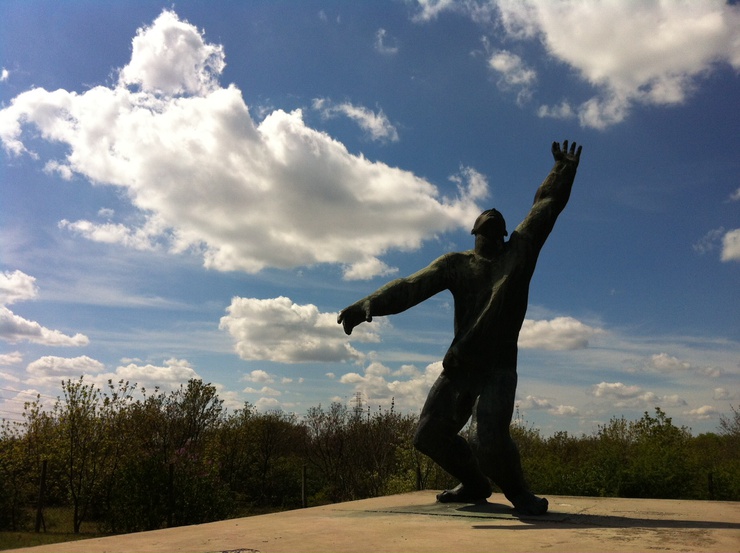 The idea to place the statues in a suburban theme park appeared to be the perfect solution for the country’s post-1989 debate on the cleansing of communist iconography from public spaces. It has been a widespread practice amongst post-communist societies in the process of re-writing histories, from changing street names too. Whereas the iconoclastic images of toppling down leaders’ statues – Lenin, Saddam Hussein, Gaddafi - have become a kind of catharsis template for all dictatorship downfalls, Hungary experienced a non-violent, almost silent transformation in 1989. With no guns fired and very few acts of vandalising the communist symbols, the communist regime quietly dismantled itself. ‘Dark spots in history stay with you, they live with you subconsciously,’ says Tamás Álmos, a 26-year old sociology graduate. ‘Hungarian society never had to confront its unresolved issues from the past. Our participation in the holocaust was erased. After 1989 we never looked back. This passivity and let-go attitude has remained even with younger generations. It leaves room for far right movements and their quick and simple answers to complex issues to capture youth minds.’

Andrássy út is a grand four-track boulevard and one of the main pulsating city arteries, once the location of the notorious interrogation centre and prison, first of the nazis, then of the communists. Whilst the street now boasts an array of Audis and BMWs flashing past Louis Vuittons shopping windows, it was once known and feared by every Budapest citizen, evoking painful memories of all those who had been detained, interrogated, tortured or killed inside. Ten years ago, it was transformed into an impressive, yet slightly controversial House of Terror. 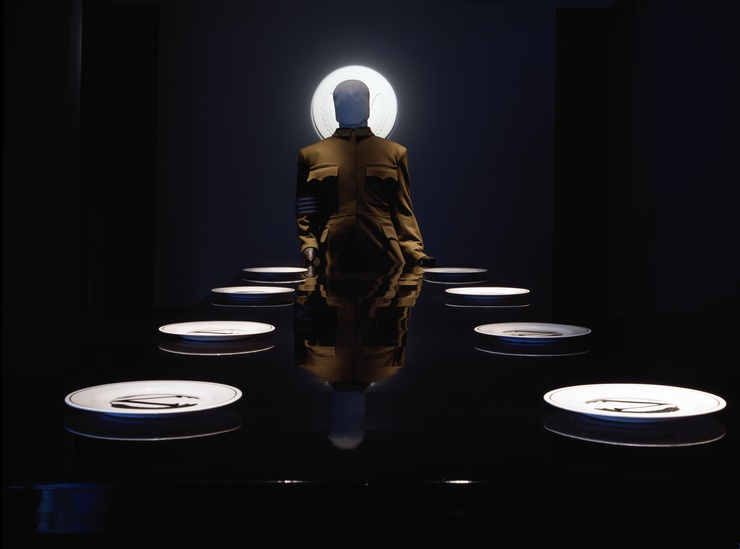 Designed by the renowned architect and set-designer Attila Kovacs, the museum is a spectacular display of the captivating powers of totalitarian iconography. ‘The idea was to understand history without verbal expression, like in a silent movie, using art installation as language,’ says Kovacs. In the basement, prison cells remind us how the victims must have felt. As if coming out of a David Lynch film or a Laibach performance, Kovacs’ installation is all about the dark side. Critics say it is the only museum in the world that equates the crimes of nazism and stalinism. The House of Terror is a provocative artistic masterpiece. From a political standpoint, the public institution set up in 2002 during current Hungarian PM Viktor Orban’s first premiership is shrouded with doubt. Orban, who returned to power in 2010 after two mandates of socialist government, is a liberal who reinvented himself as a right wing conservative. Many argue that Orban’s added strong anti-communist rhetoric is another tool to strengthen his grip on power and disqualify his socialist opponents from the local political arena. In many ways, the battle for political memory in Hungary has become the battleground for influence on present political debates. 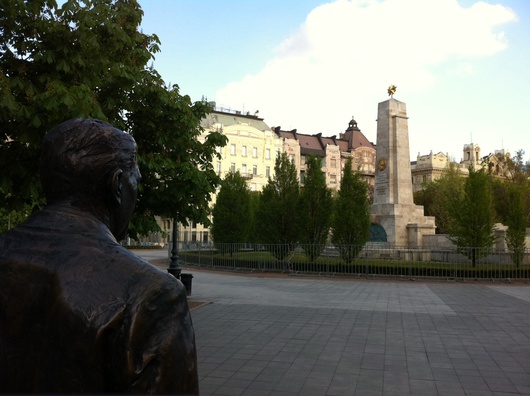 An unlikely leftover from the communist era is situated at Freedom Square (Szabadság tér). The memorial to the Red Army soldiers who died while capturing the city from the nazis in 1945 is surrounded by a protective metal fence. Behind it, a row of trees completely obscure the monument’s lower base. Far from a socialist-realist kitsch, the marble obelisk still climbs tall and proud, alas visually bland and unexceptional. Opposite a familiar figure surrounded by a group of tourists is standing freely. Palms stretched, his feet on the ground, he step towards the soviet memorial. ‘This is a statue of Ronald Reagan, former US president, set up nine months ago,’ a local tourist guide explains. ‘He helped end communism. The Hungarian people wanted to honour him for his deeds.’ A grin pops up on the president’s face, as if he’s listening. 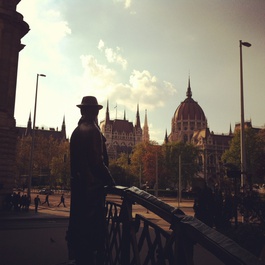 The Austrian writer Robert Musilonce said monuments are ‘invisible’. We pass them everyday, but are more influenced by flashing advertising billboards than dead pieces of marble and metal. Musil was wrong. It is precisely the silence of political symbolism that makes it constantly indicated in our everyday lives, even more so if the symbols hang ‘unnoticed’ in public space. A few feet away, I bump into a familiar face from documentary footage inside the House of Terror, calmly confronting the stalinist persecutors before his death. Now cast in bronze, he leans onto a little metal bridge, his back to Reagan and the Red Army. Understated, the former prime minister Imre Nagy seems relaxed, gazing towards the Hungarian parliament on the bank of the Danube. This strange, buzzing Hungarian debate amongst political ghosts, iron statues and marble pedestals is far from over.

This article is part of cafebabel.com’s 2011-2012 feature focus on the Balkans, Orient Express Reporter 2, a project co-funded by the European Commission and with the support of Allianz Kulturstiftung. Many thanks to the team at cafebabel.com Budapest