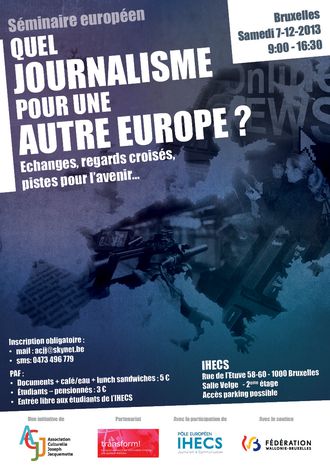 Access to information has never been easier than today. With internet and social media, the European citizen can access to a large amount of information on the European Union and communicate directly with the institutions.

Paradoxically, the gap continues to widen between the European institutions and citizens.

Considering the demanding requirements related to the complexity of European topics, the very institutional character of European affairs, the lack of personalization and politicization,  the mass media resign and provide very limited information about the European affairs.

" Institutional journalism actually refers to professional habits that are similar to those of " Clerks " reporting the European daily activities without providing interpretation of any political nature . Their technical coverage of the EU never highlights the actual political nature of events, the struggles nor the interests in balance. These journalists ... largely use speeches that institutions do on themselves. "

Thus, the democratic deficit in the EU seems amplified by a lack of information regarding the issues of European power. This gap is highly detrimental for citizens because a large part of the social, political and economic issues are decided at the European level.

Evidence of this gap, the Eurobarometer studies show that a small proportion only of the European public feels properly informed by their media in Europe, while many are concerned by the improvement of this information.

Therefore l’Association Culturelle Joseph Jacquemotte organizes this meeting between journalists, media professionals , activists and citizens from different countries of the continent to think about possible alternatives.

Through a review of the existing European journalism, review its issues and exchange of national and transnational experiences, our objective is to facilitate reflection for a better information on European issues, in order to reach concrete proposals for a European alternative journalism, possibilities  for an experimental journalism or alternatives to the current journalism.

On this basis, the objective of this seminar is to share different experiences of journalism and different national perspectives on the European information to identify ways on how the media can

- put into perspective the European decisions with local and national issues ;

- give citizens the key reading for understanding European political issues;

In partnership with Transform, the participation of the European pole IHECS and the support of the Federation Wallonia Brussels. On Saturday, December 7, 2013 from 9am to 4:30pm IHECS Rue de l' Etuve 58-60 1000 Brussels Registration required : acjj@skynet.be before 5 December 2013