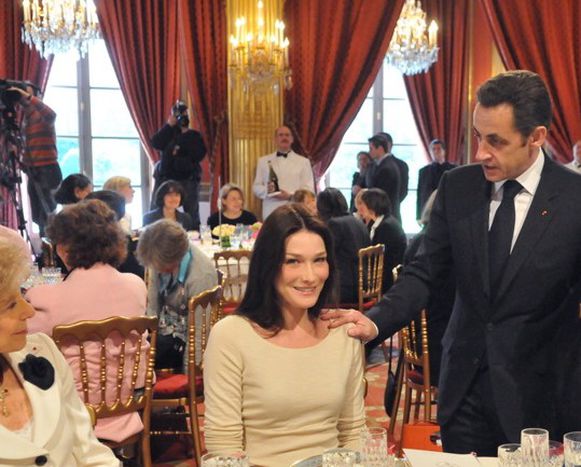 Sarkozy affair: why the Brit media and co were interested

Whether it is fact or fiction, the rumours of extramarital romantic affairs relating to the French president first-born on Twitter has impassioned the European media, despite the notable absence of newspaper treatment in France. Are European news networks coming to the rescue of national censorship?

In France, only the weekly Journal du Dimanche (JDD) newspaper dared to reproduce the rumour which broke on Twitter on 10 March: Carla Bruni-Sarkozy, the supermodel wife of the French president, had flirted with the pop singer Benjamin Biolay on a joint stay in Thailand, and Nicolas Sarkozy himself sought comfort with his secretary of state for ecology Chantal Jouanno. 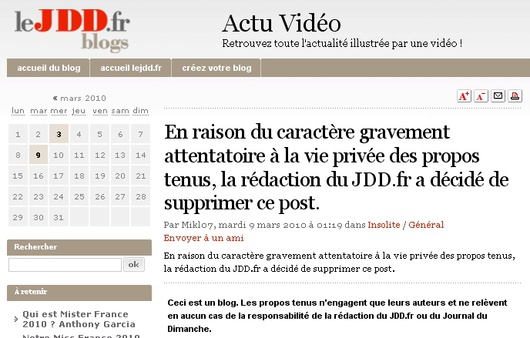 Worse, the weekly paper owned by Arnaud Lagardère, the 'brother' of the French president, was quick to self-censor and withdraw its own article posted earlier on its website… It was then that the European press dug its claws in. Articles appeared separately in the The Daily Telegraph ('Nicolas Sarkozy and Carla Bruni affair rumours sweep France') and tabloid paper The Sun as well as Switzerland's regional Tribune de Genève ('Rumours of cracks in the Sarkozy marriage hit the web') amongst others. The European press seemingly did not fear being sued, as the spokesperson for Chantal Jouanno had threatened to do to journalists in France.

So are you telling me that rumours about the private life of the French president should not greatly interest the French people, who were clearly too occupied in voting in the regional elections since they didn’t speak of other Europeans? Why should an Italian citizen, already swamped with the revelations of prime minister Silvio Berlusconi’s numerous verbal blunders and sexual liaisons, be interested in the unsupported allegations of the French president? 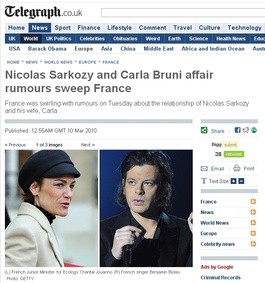 The conclusion we can draw from this is the paradox between the silence across the mainstream reference French media and the attention and attraction for the European media. Many people will dismiss this silence since it was a simple buzz, an unsupported celebrity story and in short, nothing serious. But for the Tribune de Genève, this silence is because of the 'influence that the president exercises on press and media chain owners.'

A Swiss daily newspaper sees further 'political consequences', such as the absence of the French president from the Paris International Agricultural Show (Salon de l’Agriculture) between 27 February and 7 March 2010 – which seems a priori to be a rumour. They therefore undertook some serious journalistic research after reading just a simple rumour on Twitter – proof that when information creates a stir in one country, the European media can take over the reins. It’s a bit like that in across the bane of European construction. Right?