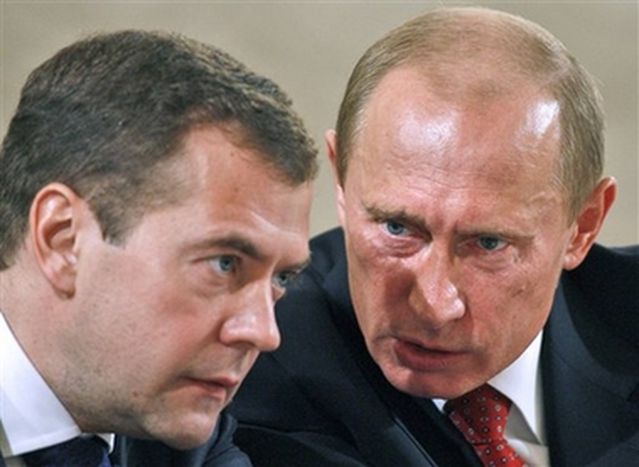 Russia, Medvedev and the End of Putin's Dream.

Some Neo-Liberals already proposed a view: the economical crisis the Kremlin is trying to hide since its beginning - with the help of national media ca va sans dire - will make Putin system disappear before the new Tsar will get the chance of running the presidential elections and guarantee some other 12 years of government to himself.

What I have tried to do, then, it has been to move even a bit further and find some more reason of the possible changeover Russia might live during the newborn 2009. And it turned out that it might be huge.

“The Beginning of a Medvedevian era?”

Young, with a liberal background and without enormous FSB nor Party dark shadows in his past, the Russian President might be the real homo novus in 2009. He knows it and I am sure he enjoys it quite a lot.Being pragmatic in a way the ideological Putin will never be, Medvedev has all the tools he needs for realizing how important is to re-think Russian foreign policy and if Putin struggled in the past years to show everyone how muscular and aggressive his country could be during its - artificial?- economical rise, the new President will have to show the world how some kind of new cooperation with Western countries is possible – where not even needed for the nearest future.And, useless to hide it, even for any kind of anti US or EU policy, in the long term.

“The Country Needs Money. A lot and fast.”

Whether they will try to become more “Western friendly” or aggressive, they will definitely need money. And he will have to find it.Oil price will most likely not rise as someone hoped and foreign investments will become vital for the development of the country.Plus, nothing new about that, Russia wants its former satellites - EU Member States and non - back under its sphere of influence. The question we should find an answer to,is: “how?”.As already widely discussed last August, an old fashioned traditional war is not starting anytime soon so there is no need to panic for that: too many counter effects and countries would be implied into such an useless conflict and this makes the risk not really worth to be taken.And, if we all agree on that, let's delete the first option from our list and move on.Someone said that, as the Mainland has still a great power on Russian speaking / native Russian people living in such regions, the easiest way to open a breech inside those societies, is to intensify propaganda and make people feel a stronger sense of belonging to Russia.Without opening the borders, of course, because they do not really fancy to welcome hordes of potential new citizens, they just need to keep Russia as a key speaker in the international scenario.But - and here I might be totally wrong - my confidence on people leads me to the conclusion that even if propaganda can do a lot, it will not be powerful enough to keep Putin's popularity so high the day people will feel effects of the global crisis on their own skin.Plus, let's face it: for how great the mean might be, propaganda through media in 2009 cannot have the same outcomes it had in the Sixties or even earlier.While my Russian fellows read Interfax and listen to State driven Tv news, they also have Google news opened in a second tab while the third one is constantly showing RSS feeds from BBC, AFP or any other foreign media. And this surely means something.And if we cancel also this option from the list, we do not have many choices left.So, what about something Russia forgot for quite a while, something named “Diplomacy”?

“Time for the Bully to Grow Up – The Presidential Chance”

I liked the label of “ foreign policy-bully” Radio Free Europe gave to Russia and I think it really suits the country for the way it behaved during the past. My question here is, will it still suit it in 2009?Or, even more, will a new, negotiations-oriented Russia, suit Mr. Putin?The current crisis with Ukraine shows it all: Russia needs to sit down with other world's powers and discuss. Which does not mean that from one day to another the country will give up on anything. It simply means that Russia will be opened to discuss issues. And this will happen in a world which is not the one where President Putin prospered.The new international meetings will not be a family reunion between Mr. Bush, Mr. Blair, Mr. Chirac and Mr. Putin remembering their funny episodes and mentioning the world from time to time, these will be gatherings of new Presidents with, for what we see, more pragmatic backgrounds.President Medvedev will sit together with Barack Obama, Gordon Brown, Nicholas Sarkozy and – yes, this is still the same – Silvio Berlusconi and, together with them, he will have to find some solutions to survive this negative moment and grow again in the nearest future. Something the country deeply needs as, since the end of the Georgian war, Russia saw its economy facing one of its hardest time after the Nineties. Oil prices dipped from 140$ to 50$ a barrel, the stock exchange went down over 70% during the whole year and many of the icons of Putin's prosperity are already showing to his people the effects of his policies.The Federation Tower, a skyscraper in the center of the new business district which should have been the tallest building of Europe is now there, unfinished, looking at its future without any certainty.And for how nice the little show he made on Tv right before Christmas might have been, I do not think people will still remember it if the banks will keep closing or showing “Out of Cash” signs to their customers.

“But, wasn't him only Putin's puppet?”

Maybe he was. It is true.But maybe he will not stay a puppet for long, because since he started to work a lot on his image at the international and local level – consider it stupid but I think the choice of keeping a video-blog might turn out to be genial – I started to think he might be the first one to use the new reform for prolonging the Presidential term.Is it a good thing?This I do not know.But what I do think is that he is smart enough to keep the Russian tradition of successor-eats-predecessor alive, for the sake of his ego, his citizens and a cold war which is destined to be played always more into economics.Because this will be the real issue, the mean Russia will use for getting closer to its former “allies” again. A point that, even if it cannot be officially inserted in our list, will play the main role in the near future.Once the country will have the money it needs to keep the machine working then it will be possible to literally “buy” some of the neighbors countries by becoming their main investor.And where will this money come from and how will it start flowing to Russia again, is a mystery only Mr. Medvedev can explain us. Not Mr. Putin.