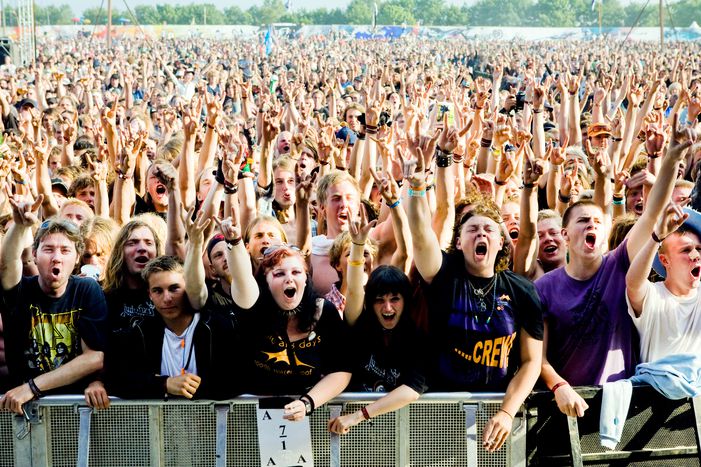 I've been to Roskilde many times. Usually I skip most of the concerts and just kind of float around in the unreal reality that magically evolves when you put people on a field and tell them to do as they please. I did however, for the sake of this article, make it to a few concerts

Every year in the first week of July Denmark is turned upside down; people of all ages from all over the country pack their bags and relocate to a field just outside the provincial city of Roskilde, on the island of Zealand, to celebrate Scandinavia’s biggest cultural event. The migration triples the population of Roskilde, making it the fourth biggest Danish city for the duration of one of Europe’s biggest outdoor music festivals; it ranks third or fourth after Rock Werchter, Sziget and Glastonbury. Roughly a third of the guests are from outside Denmark, the majority from Norway and Sweden, with Germany, the UK and the Netherlands also well represented.

Opening night: Trentemøller plays the festival’s main stage, the iconic Orange Stage, with a capacity of over 60, 000. He puts on quite a show, which seems to appeal to Roskilde’s typical rock/ pop loving audience. All Danes, including the festival bookers, seem to think that the electronic musician is the world’s most famous of the sort.  I always feel a bit embarrassed when I hear Danish people talking about the grandeur of Danish persons or achievements. The media hype prior to the concert has been so intense, that I honestly think I would have liked the whole thing more had he been from another country.

Music aside, the most prominent discussion theme on any festival site is bound to be the weather. This year Roskilde was blessed with blue skies and no rain. Sounds nice, you might think, but no. Trying to sleep (or even just be) in a tent when it’s pushing on 30 degrees celsius outside is pure torture. And because alcohol unfortunately makes me want to stay awake forever, I never make it to bed early enough to get more than two hours of sleep, before the sun drives me out.

The hours around noon mainly consist of shadow hunting. Saturday morning is spent in the chill out area. 'The Lounge' is a huge stable-like building with sand covering the floors and nineties style Balearic ambient chill pop music (they even play ‘He’s on the phone’ and the 1970 version of ‘Suicide is painless’!). Lying half asleep in the coolness of the shadow, I know that despite intense sweating, epic hangovers, lack of sleep and the raw onion taste from Friday night’s sandwich accident, I'm in the right place at the right time with the right people. Happiness comes when you least expect it.

Being at Roskilde is not so much about the tight concert schedule. Both camping and festival areas contain enough madness, games, creativity and grass roots politics to keep you busy around the clock. Cool down under the snow cannon, recharge your mobile by pedalling on custom-made bicycles, listen to climate lectures, participate in free sex education classes, skate, climb, swim, fish, play in virtual reality, rave all night at the pirate parties, get a full body scrubbing by scantily dressed models in the Human Carwash ...  with so much going on around you there is hardly time for concerts.

Despite sweating, hangovers, lack of sleep and the raw onion taste from Friday night’s sandwich accident, I'm in the right place at the right time with the right people

One concert I don’t want to miss is Saturday night’s main act: Pet Shop Boys, and bitte: who doesn’t love the Pet Shop Boys? Their show is phenomenal – the cleanliness and perfection of their aesthetics even make me forget that I am breathing pee flavoured dust. The only mental downer in their walk down happy memory lane is that they’ve started to look slightly like a couple of Truman Capotes in loud colours – which not only makes their band name a touch pathetic, but also inevitably makes me think, that if Neil Tennant looks old then something beautiful inside all of us has died.

Forty years on: thumbs up 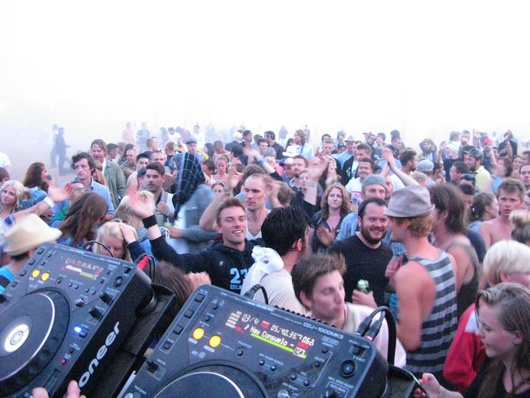 Roskilde might not be Europe’s biggest, wildest or most original festival, but I doubt that you’ll find another major festival with such well planned infrastructure. After the logistical horror of trying to get home to Berlin from Fusion Festival in Germany just a week earlier, I'm pleasantly surprised to see that the train I board at the festival station takes me all the way to Copenhagen central station in less than an hour. After almost forty years of existence the festival can now brag not only about having its own train station, but also its own radio station, newspaper, skate park, cinema, artificial lakes, bakery, Ferris Wheel, mobile antennas and even an onsite supermarket - everything from your organic lintel soup to your Cuban cigar in the whisky bar can be paid with credit card.

Roskilde is also a dionysian mini-version of the modern Scandinavian welfare states, where comfort is God, and safety trumps everything

The much talked about crowd accident in 2000 where nine young men tragically died during a Pearl Jam concert has brought about massive investments in and attention to security and safety. Crowd surfing and sitting-on-shoulders is now illegal, and the floors of the bigger stages has been divided into pits with security paths in between. The festival site is now as safe as a Swedish playground. Because of this, the Roskilde festival is not only the biggest cultural event in Scandinavia – it is also a somewhat dionysian mini-version of the modern Scandinavian welfare states, where comfort is God, and safety trumps everything. Only difference is that at the festival everybody is welcome.