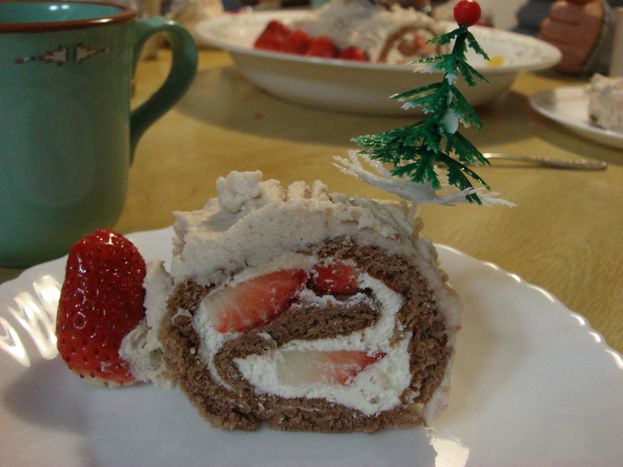 Romania to UK: the whole of Europe in your plate

What do Europeans do the night before Christmas? They eat! The flavours and colours of the dishes vary enormously. But certain culinary practices can be surprising. A tour of the traditional and intriguing dishes of Europe

Perhaps you will be the next to receive the hospitality of your neighbours one Christmas night. To avoid disappointment and the face that you would surely pull when you are served unusual dishes, we invite you to take a little tour of the most typical dishes of Europe. 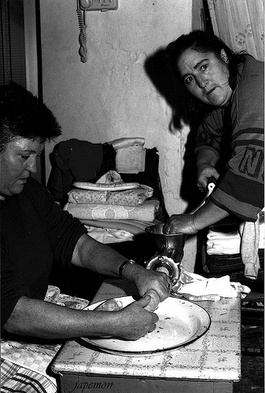 In Poland, the Christmas tradition is to set places at the table for more guests than are invited. A passerby who wishes to join the Christmas meal is usually warmly welcomed. In Spain, visitors are often served sweets such as mantecado, little shortbread biscuits with olive oil; roscos, wine biscuits; or even polvorones, cinnamon biscuits. They may also receive a wicker basket filled with local produce: almonds, olive oil, chorizo, dried fruits...

Since we are in Poland, let us stay a while. Visitors cannot escape the gathering of 12 dishes, traditionally meatless, which include produce from the fields, the forests and the rivers (generally jellied fish and particularly carp, the Polish royal dish). You will also be served beetroot soup accompanied by cabbage and mushroom filled rolled pancakes. For dessert, you will taste poppy seed cake, called Makowieck.

In Romania, pork is king: pate, sausages, chops and everything is made at home! The family gets together to kill one or two pigs. Then comes the sharing out of the offal and pieces of meat. During the meal, plates of slices of meat are also added to the table. 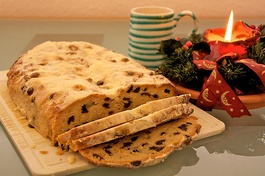 In Germany, Christmas Eve is for greediness: this is where its nickname ‘night of the full stomach’ comes from. Pork also reigns supreme at this family meal. The Christollen is the traditional Christmas cake. It dates from the Middle Ages and originally comes from Dresden. Its form represents the Christ child in his swaddling clothes.

In Belgium, the menu usually consists of game or turkey, but new dishes such as ostrich and kangaroo have started to appear on dinner tables in the last few years. In Wallonia, they eat ldjotte tripe, also called green blood sausage because it is stuffed with green cabbage. It is also the custom to taste cougnous or cougnolles, sweet buns in the shape of Baby Jesus. 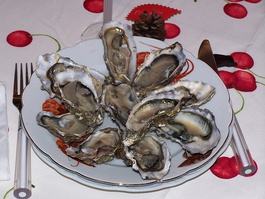 As for the French, they will make it a point of honour to serve each person a plate of half a dozen oysters with lemon juice, or Burgundy snails with garlic butter sauce. The traditional foie gras and jelly is also served in a very solemn manner. But be careful not to spread it on your bread as if it were just plain old pate! For dessert, you will taste the famous bûche de Noël (Yule Log cake), served with cream or ice cream.

Turkey is stuffed with chestnuts in France and with sage and onions in Great Britain, sending the taste-buds of the non-initiated into turmoil. On the other side of the Channel, the most intriguing dessert remains the Christmas pudding; a mixture of wheat blanched and boiled in spiced milk, prunes and nutmeg. The English and the Irish have made this dessert with an indefinable texture legendary: its preparation begins in November, and the last Sunday before Christmas the family get together to ‘turn’ the pudding while making wishes.

From fish to washing powder in Sweden 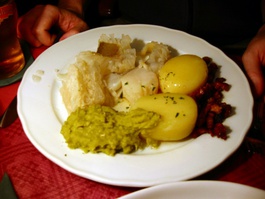 In Sweden, they begin the meal with a special starter called a smörgasbord: herring marinated in onions, accompanied with blinis and cream, malossol gherkins pickled in salt and vinegar, black bread, liver pate, smoked sausages, jellied pork, meatballs, anchovy gratin, and then a whole ham in brine, either boiled or roasted. Then comes the lutfisk or washing powder fish! This is dried hake soaked in caustic soda washing powder to soften it. 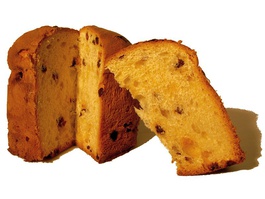 In Portugal, the meal traditionally centres around the turkey, but don’t be surprised to see baked cod in your plate, accompanied by potatoes and baked or steamed cabbage.