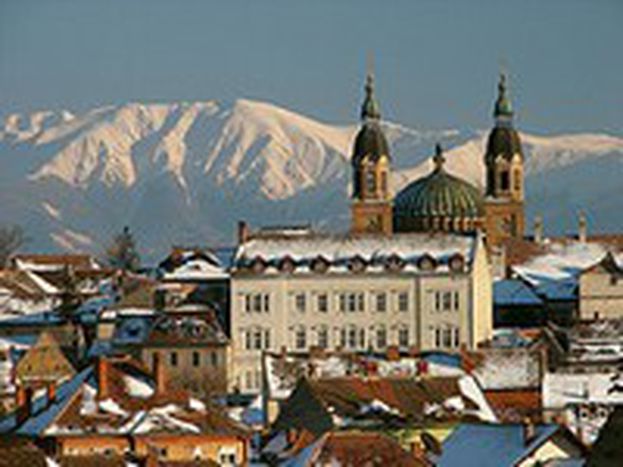 The European Commission wants to integrate Romania into the EU on 1 January 2007 – if the country can keep its corruption under control. A feature from Siebenbürgen.

"Nuda spaga!" – "Don’t pay bribes!" The poster, which adorns a window of the station hall of Sighioara, is already yellowed. This afternoon old women with head cloths sitting and rest their worn feet at the station at Sighioara. A peddler with drills in his arms stands smoking on the platform. A gypsy stretches her hand out to two pale backpackers.

Nobody takes any notice of the poster in the station hall. It illustrates the anti- corruption campaign of the Romanian government and is a promise that yet needs to be honoured. In 2004 Traian Bsescu of the Democratic Party (PD) won the race for the presidency with "a national strategy" against the culture of bribery. Romania’s corruption is one of the main criticisms raised by the European Commission in their final progress report of 26 September. The EU says that there is a very good chance that the country will be able to join on 1 January 2007. But the government must carry on the fight against everyday bribery.

A few posters won’t change much. Romanians have other concerns. Most survive with little or nothing, with a couple of hectares of land and a cow or with casual work, and the poorest turn to begging.

A train pulls into Sighioara station. The old women drag their plastic bags to the platform and the peddler heaves his drills. They have to pay for the trip somehow - and want to save money. One of them doesn’t have a ticket and presses money into the guard’s hand. Even if they pay less than the official ticket price, the train guard rounds off his lean salary this way.

42 percent of Romanians have bribed state employees according to a report by the World Bank in 2000. The NGO Transparency International believes that up until today the governments have changed very little "Our inquiries prove that Romanians pay as much in bribes today as they did before the campaign", Victor Alistari, head of the Romanian branch of Transparency confirms.

Every second person in Romania, according to the World Bank report, pays extra. And every third official admits to being corrupt. When we look for somewhere to stay the night in the little Siebenbürgen village of Bîrghi, we are picked up at the edge of the village by a young man with a naked torso and a thin gold chain around his neck. Horse-drawn carts rumble along the dusty village track full of holes, but our driver loads our luggage into a shiny silver Mercedes-Jeep. When we ask surprised, where he got it from, he casually answers: "Oh the car is not new. It is already two years’ old."

We find out later how he could afford his luxury car: He is the dentist’s brother. Each second Romanian bribes his dentist, for a better, quicker treatment, or simply to get treated. And this is just to have ones’ rotten teeth pulled out. Corruption rots the hospitals too. To have an operation an individual must invest several hundred euros from his own pocket. The badly paid nurses need two or three euro "tips". The recently published satirical "Corruption Handbook" Manual de Spaga sarcastically notes: "Pregnancy is a condition of the female body, which makes high bribes payable in the phase before giving birth at the very least."

Corruption hits the poorest people hardest. As their teeth rot, corruption makes deep holes in the household bank accounts, draining over ten per cent of their incomes. Only naive optimists dream of rising from rags to riches. Emöke and Sari from Bîrghi have given up. The sisters, who belong to the Hungarian minority in Sighioara, have lost faith in the social justice in Romania long ago. While still under Ceauescus dictatorship, their father put money aside month after month to purchase a car. After the radical change of December 1989 came the economic crisis. Their father’s savings melted away with inflation. And with them their dreamt car.

Today Emöke and Sari are convinced: Those who dream of rising above the trials of daily life shouldn’t rely on the strength of their own wings, or should go to a foreign country. The sisters say that there are only two ways making money in their country. First they can work hard in the Italian vineyards, the East German cucumber factories, or on building sites in Spain. The easier route is via corruption, an open option for train guards, doctors, teachers, customs officers and policemen.

Many Romanians still believe that politicians are in principle corrupt. No wonder therefore that Traian Bsescu convinced the voters with his anti-corruption campaign. Thanks to pressure from Brussels, modest progress can be seen. The Minister for Justice, Monica Macovei has implemented a law, by which all civil servants must make their incomes public. In the meantime the former Prime Minister, Adrian Nastase, is sitting in the dock justifying his million-plus-undeclared income. According to his adventurous defence, he inherited it from his aunt Tamara, who lives in a block of flats in Bucharest.

Many poor Romanians would be probably be glad to have an aunt Tamara. The economy is booming thanks to unbelievably low wages. Will accession to the EU release Romania from corruption? This is doubtful. Once the country joins the union, the pressure from Brussels will diminish.

Possibly, the booming economy will enable the state to pay sisters, policemen and guards higher salaries. They would not be able to rely on bribes any more and the poor will profit from growth. They would then be able to afford their train tickets. But even socially fair growth does not guarantee success. Ultimately this will come from a change in mentality – and for this more is required than the pale posters in the station.