Fighting corruption? Romania and Bulgaria should do more to fight it, bemoans the EU. A progress report on 20 July singled out the Romanian judiciary and legal system. Romanian bloggers and Bulgarian dailies reply, whilst the Austrian and German press have their bit to say too

The criticism voiced in the EU Commission's progress report strengthens reform-oriented forces in Romania and Bulgaria, writes the left-liberal daily: "The verification mechanism that Brussels adopted when Romania and Bulgaria joined the EU has proved meaningful and effective. This time the commission has not blocked any EU funds as a sanction. That would certainly not be helpful in the midst of the economic crisis in which many Rumanians are suffering desperately - especially as Bucharest is still not in a position to absorb all of the money being put at its disposal by the EU. Far better would be to question the country's accession to the Schengen area as a way of counteracting the lack of political will in Bucharest. Reform-minded people in both new EU states are already delighted at the criticism coming from Brussels, because in the past such criticism has introduced small revolutions in the system of clientelism' (Adelheid Wölfl)

When in doubt: write your own report? - Blog Voxpublica, Romania

'Just imagine if the EU states were to take the counter-report seriously, rather than the commission's. That would set a dangerous precedent that discredits the EU commission. Traian Băsescu has tried to make it clear that the counter-report is bound up with Romania's wish to join the Schengen area [in 2011]. We'll force our way in with a counterattack, you see! That's a bad idea because it means we're accusing the commission and the EU of having hidden intentions. Hopefully Traian Băsescu will realise that if he puts his idea into practice Romania could earn the reputation of being a country that tries to discredit the EU's work' (Cristian Teodorescu) 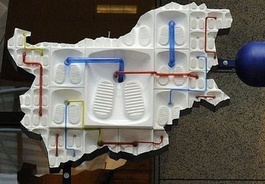 The demands expressed in the EU progress report on Bulgaria are entirely justified, writes the Bulgarian daily, even if the country will not be able to fulfil Brussels' wishes: 'It is demanding more competent jurisdiction concerning corruption in the upper echelons of power. That means courts should hand down stricter punishments for corrupt politicians, rather than just washing their hands and polishing their image. It is calling for a body that will discover and prevent conflicts of interest. It is calling for an end to corruption in public tenders and sparing use of EU funds. They are not asking for anything unusual other than a state based on logic and the public interest. What is written between the lines is: those who are immune to criticism are running roughshod over the reasons behind Bulgaria's EU accession. We however do not have the courage to name them, let alone put them on trial. To top it all off, we're lazy. We make a big thing of our will for reform but the results are exceptionally slow in coming. Because we don't want to change. We just pretend we do' (Martin Karbovski)

The EU has reprimanded Bulgaria and Romania for serious shortcomings in the fight against corruption. The German conservative daily regrets that it is too late to impose legal sanctions on the countries: 'The deadline expired at the end of 2009 without the two countries having come close to meeting the judicial standards customary in the rest of the continent. The EU commission, after painstakingly recording all of the lapses year for year, now announces it will impose no further sanctions. This constitutes a scandal no smaller than the EU states' irresponsible handling of the euro stability pact, although in contrast to the currency crisis it may seem to be of less consequence. The EU demonstrates a patience with respect to Bulgaria and Romania as if we were dealing with agricultural reform somewhere in Africa. The fact is, however, that the citizens in the other twenty-five member states must go on sharing a legal apparatus with two countries with demonstrably corrupt and inefficient states' (Nikolas Busse)